Mark Allen completed one of the great Cazoo UK Championship final fight backs as he came from 6-1 down to beat Ding Junhui 10-7 and win the title for the first time.

Tickets for the 2023 UK Championship are on sale now – for details click here.

In a thrilling conclusion to the tournament in York, the Pistol reeled off nine of the last ten frames with two centuries and five more breaks over 50 to take the trophy and £250,000 top prize – his biggest career pay day. It’s his second Triple Crown title having won the Masters in 2018. 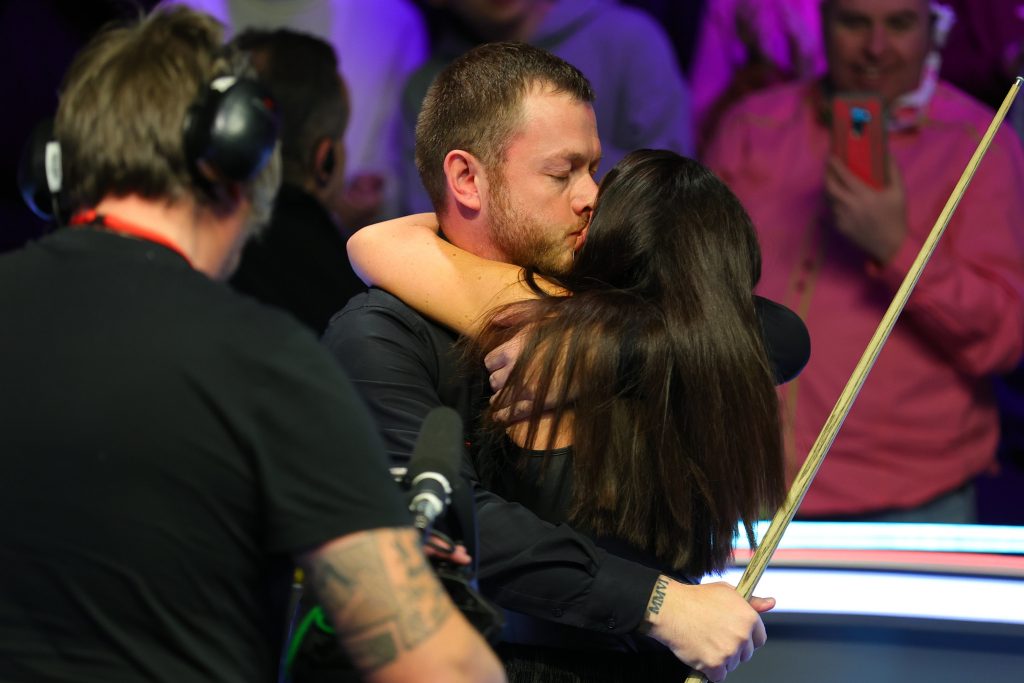 Allen lost in the final at the Barbican in 2011 and 2018 but made it third time lucky as he recovered from a slow start to bury China’s Ding, a three-time winner of this event. On his path to the final, Allen had trailed by at least two frames in all four matches, but each time came back to win, then saved his best come-back of the week for the last day.

The pattern of the match echoed last month’s Northern Ireland Open final when he came from 4-1 down to beat Zhou Yuelong 9-4, and stands alongside the best UK Championship final comebacks, notably Alex Higgins’ 16-15 success from 7-0 down against Steve Davis in 1983, and John Higgins taking the last five frames to edge Mark William 10-9 in 2010.

It’s the eighth ranking title of his career, bringing him within one of Shaun Murphy, Peter Ebdon and John Parrott who have nine apiece. The 36-year-old from Antrim is in a fabulous run of form as his victory in Belfast in October followed a runner-up spot at the Cazoo British Open. He is up from ninth to fifth in the world rankings and holds a vast lead at the top of the one-year list with £380,000 to his tally. 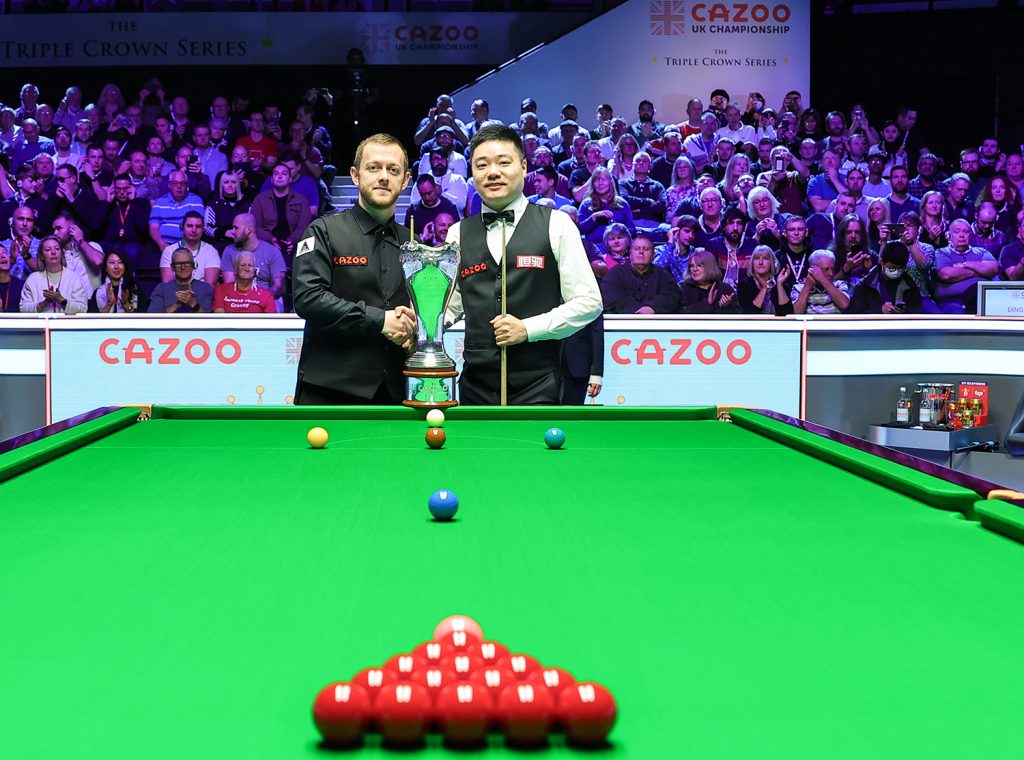 The left-hander has faced personal problems over the past two years, including divorce and bankruptcy, but reveals that he has come through the worst of those troubled times, and also lost five stone in weight over the summer. Unburdened by mental and physical pressures, he is now playing to his full potential.

Ding, champion in 2005, 2009 and 2019, missed the chance to become only the fourth player to win this event on four or more occasions, after Ronnie O’Sullivan, Steve Davis and Stephen Hendry. He was cruising at 6-1, having made three centuries, but couldn’t regain the same fluency in the concluding session, and Ding remains on 14 ranking titles, the last of which was that 2019 success in York. The 35-year-old from China banks £100,000 and jumps from 38th to 19th in the world.

Trailing 6-2 after the first session, Allen got the perfect start tonight as breaks of 60, 93 and 132 closed the gap to 6-5. He was on 56 in the next when he went in-off, and Ding clawed his way back into the frame, getting the two snookers he needed. But Ding then missed the green and Allen took advantage to square the match.

After the interval, Allen kept his momentum going, making a 59 as he took the lead for the first time at 7-6 then taking the next in one visit with a 109. Having lost seven frames in a row, Ding regained the initiative with a break of 105. In frame 16, Allen made 42 before running out of position, but soon got back in with a thumping long red and added 32 to go 9-7 ahead.

Frame 17 was a scrappy affair and looked to be going Ding’s way when he led by 35 points, but Allen pulled out a fantastic clearance from the penultimate red, underlining his capacity to hold his nerve in the biggest moments. 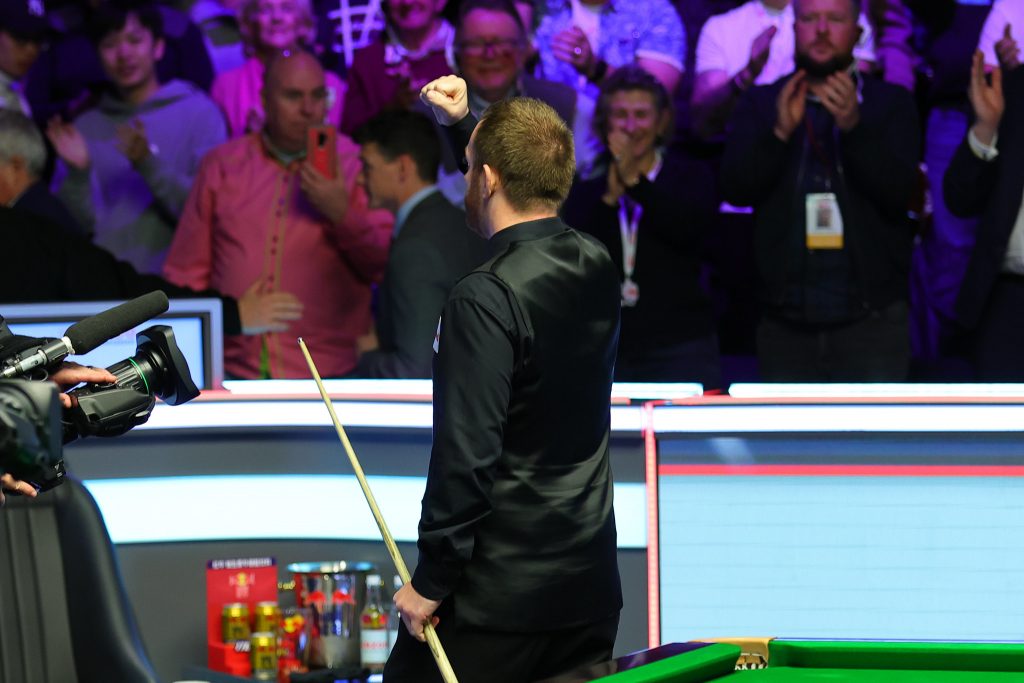 “I knew Alex Higgins had come from 7-0 down to win a UK final, I guess that shows us Northern Irish never say die and we have plenty of bottle,” said Allen. “I never let my head drop, even at 6-1. When I got back to 6-3 something changed and I felt great. By the time it was 6-6 I felt as if I wasn’t going to miss, and that’s a great feeling to have in a big final. It was my positive mental attitude that got me through and I’m really proud of that.

“It was pure relief when the last pink went in. It has been such a tough nine days and I would have been devastated to lose today. I want to build a legacy for myself in this game. I am two thirds of the way to the Triple Crown now. I know how tough the World Championship will be. But if I keep doing what I’m doing then I will be confident when I go to Sheffield.”

Ding said: “Mark was very strong when he came back at me. He’s always been a good come-back player, so I didn’t relax. I didn’t make that many mistakes, he just potted long ones, made big breaks and centuries. At 6-6 I lost a bit of feeling, he played much better in the second half. I didn’t make any breaks and suddenly he was in charge of the game.

“In the last frame I had a chance, maybe if it was 9-8 then anything could have happened. I’m disappointed, I had this great chance to win a title. But it’s always the best player that wins the trophy. I’ll stay confident, keep my head up and work hard. There’s nothing I need to change. Things are going well. I can’t get everything back in one week, I can only try and win more tournaments.”