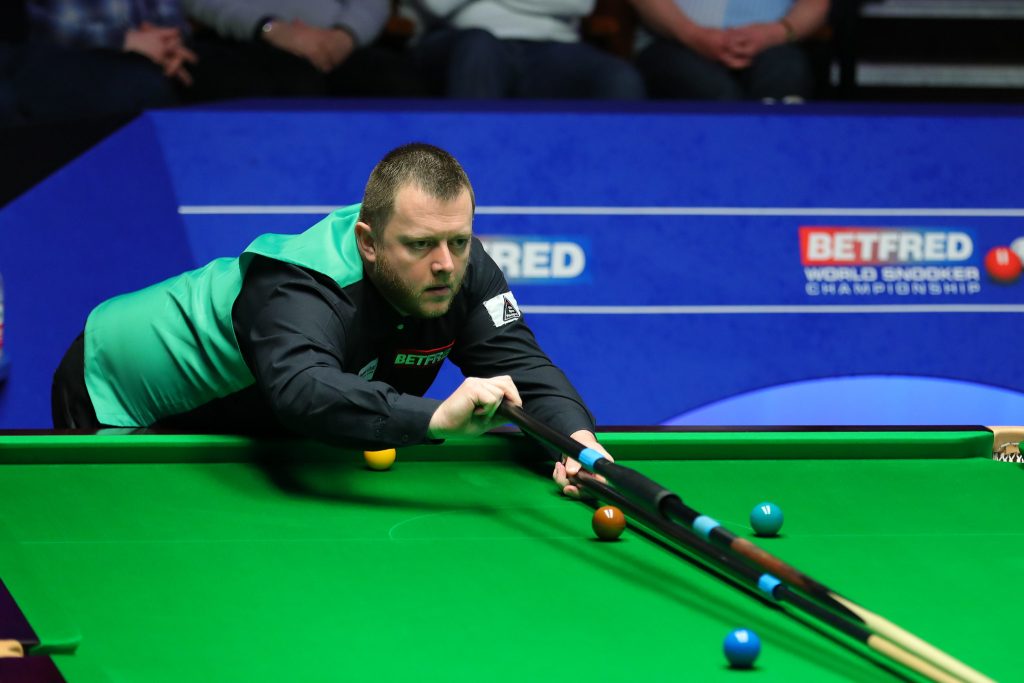 Mark Allen came through a tough opening test against Scott Donaldson at the Betfred World Championship by a 10-6 scoreline, and will try to revive memories of his only previous Crucible meeting with Ronnie O’Sullivan when the pair go head to head in the second round.

World number 15 Allen looked in danger when Donaldson came from 7-4 down to 7-6, but he finished strongly to take the last three frames and set up a best-of-25 clash with O’Sullivan which starts on Friday morning.

Allen’s first career meeting with O’Sullivan came in Sheffield in 2009 and he won 13-11 en route to the semi-finals. He has a fair record against the Rocket, winning four of their ten matches, and hopes another will go his way this time.

“It’s what we play the game for. You want to play your best game on the biggest stage,” said 36-year-old Allen, who has reached the Crucible quarter-finals just once in the past decade. “The only time I played Ronnie in Sheffield, I beat him. So I have to try and keep those memories fresh. The task is tough, but Ronnie has been coming here for 30 years, and he’s won six titles. That means he’s lost 24.

“I’ll go out there, hopefully play well, and try to keep control of myself. He looks in a good place so far, but we all know it can turn very quickly with Ronnie so it’s up to me to go out there on Friday and Saturday and play the best I can and get under his skin. He’s a genius, but he is beatable.” 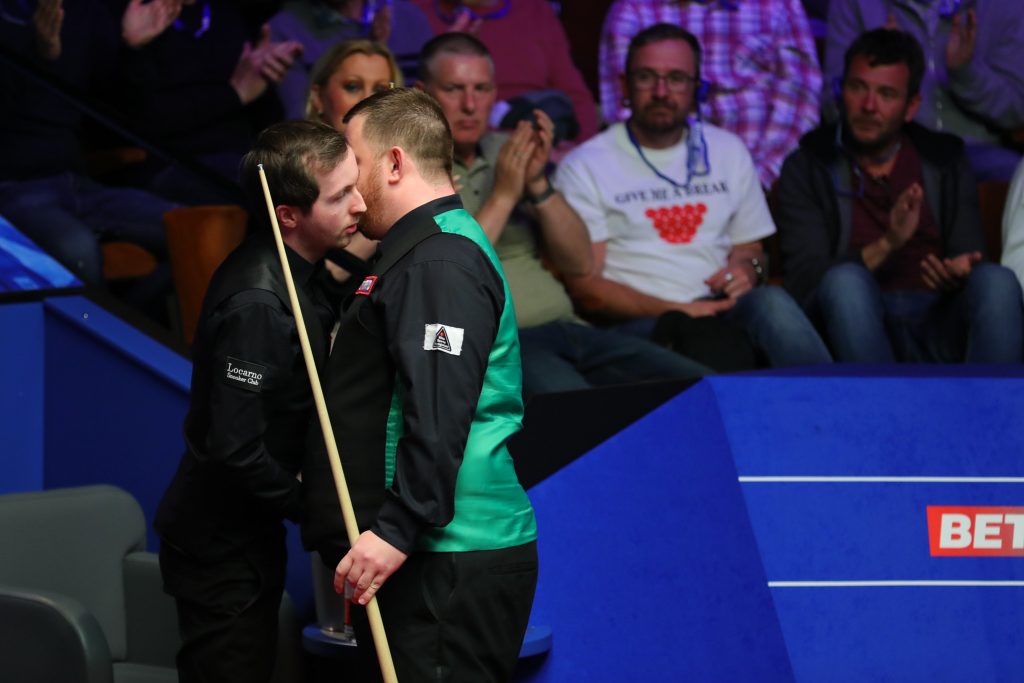 Leading 5-4 coming into tonight’s concluding session, Allen made a break of 57 in taking the opening frame to double his lead. In frame 11, Donaldson led 47-35 and had the balls at his mercy when he missed the brown to a top corner. Allen punished him by clearing to extend his advantage to 7-4.

The Northern Irishman might have increased his lead, but missed the penultimate red when he led by 35 points in frame 12. It came down to a safety exchange on the pink, resolved when Donaldson converted an excellent long pot to a top corner and added the black. The Scot also dominated the 13th to close to 7-6 at the interval.

A run of 52 helped Allen take frame 14. The next came down to a battle on the last red, and Allen trapped his opponent in a tough snooker, which created the opportunity to put him 9-6 in front. And the Pistol sealed the result in the 16th with runs of 34 and 38.

“That match had a bit of everything today,” added Allen, winner of six ranking titles. “I don’t think it’s the best match we’ve ever seen but by far from the worst either. There was some real good stuff in there.

“I’ve been feeling unwell for the last ten days or so. I was convinced I had Covid, but I’ve been testing negative every day. Today hit me more out there, being under the lights and the heat. I have a few days now to rest and hopefully I’ll be firing on Friday.”

Donaldson said: “I felt really comfortable out there, I feel like I’m enjoying my snooker again. I love playing in the Crucible, I think everyone loves playing here. It’s a brilliant buzz to be out there, even if you don’t play very well. It’s such a great privilege to play here.

“My game is going the right way again. I had a tough time earlier in the season but I’m happy now where I am both personally and on the table. I know my flaws, I know my strengths – I’ll just work on those and go out there and try my best. I think Mark can win it. If he can find his A-game, then he can go all the way.”

On the other table, 2015 World Champion Stuart Bingham opened up a 6-3 lead over Lyu Haotian. 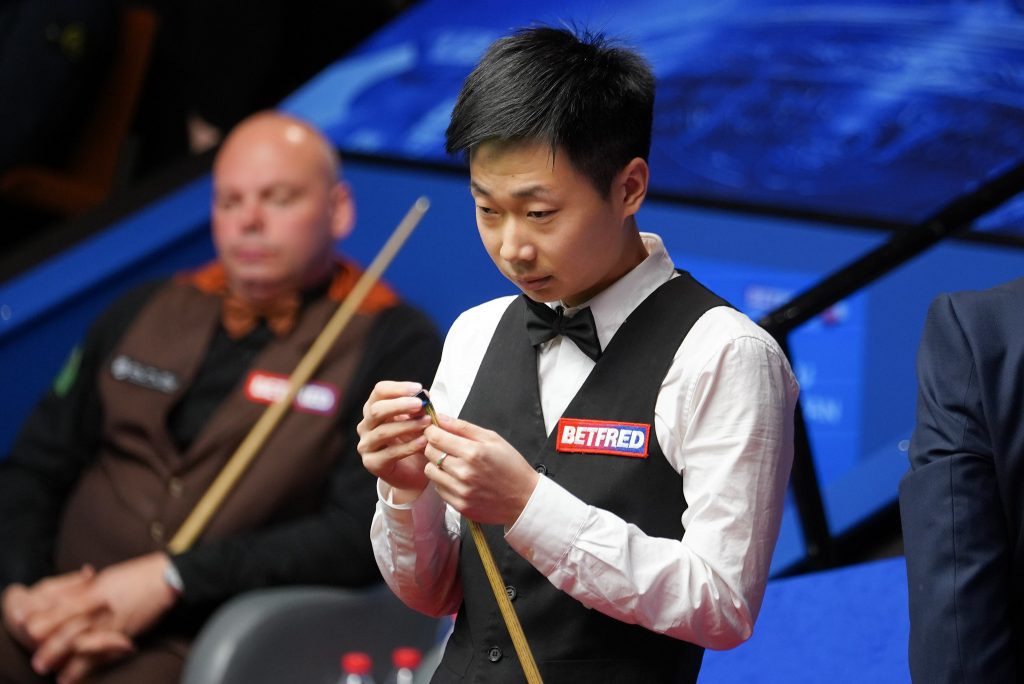 Lyu is making his third Crucible appearance, he beat Marco Fu to make the last 16 back in 2018 and succumbed to an opening round loss against Allen in 2021. Lyu defeated Dominic Dale 10-4 in the final round of qualifying to secure his place at the Sheffield showpiece this year.

China’s Lyu edged a nervy opening frame on the black, before Bingham claimed the second to restore parity. The former Masters winner then took the lead at 2-1 with a break of 52. Lyu, age 24, showed his class with a century break of 103 to make it 2-2 at the interval.

Bingham returned in clinical mood and produced a run of frame winning breaks to pull clear. Contributions of 54, 85, 86 and a stunning 140 saw him rack up four in a row to move into a 6-2 lead.

Bingham looked in position to take the last, but missed a red on 68. Lyu pounced and cleared to the black with 69 to steal by a single point and stay in touch at 6-3. They return on Tuesday at 2:30pm for the final session.