Stuart Bingham moved within two wins of a second Cazoo Masters title as he stormed to an emphatic 6-0 victory over Shaun Murphy in the quarter-finals.

The 2,000 strong crowd at Alexandra Palace may have expected a close contest between these two rivals, a repeat of the 2015 World Championship final, but it was Bingham at the table for most of the evening as he dominated the tie, making two centuries and two more breaks over 60. The match lasted just 92 minutes as Basildon’s Bingham marched into his fourth Masters semi-final. 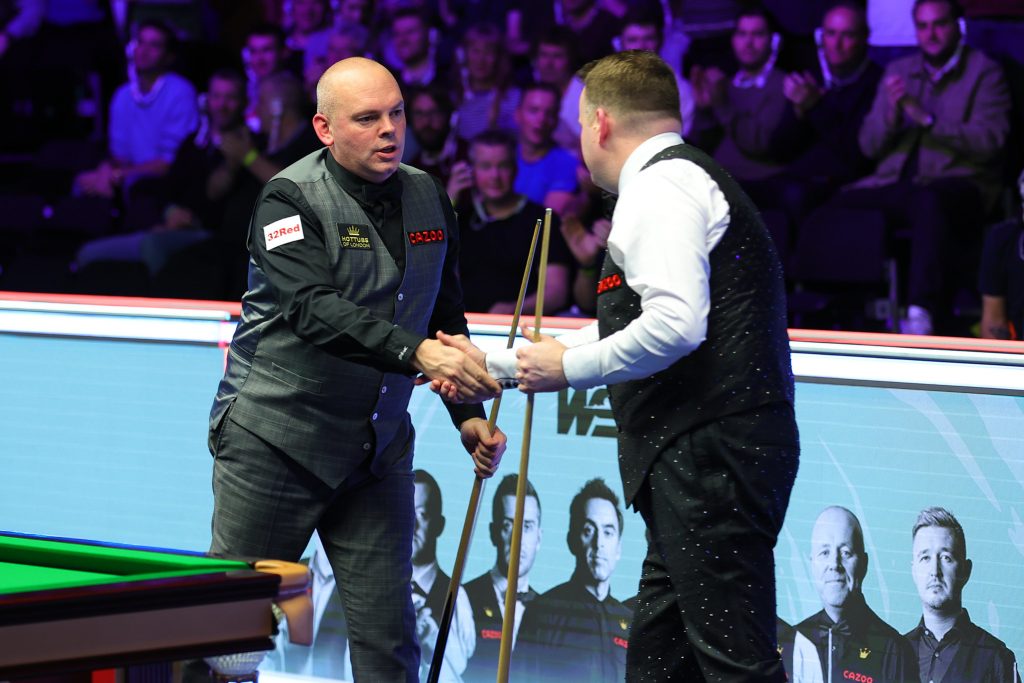 At 7pm on Saturday he will face Judd Trump, the same player he beat 17-16 to reach the Crucible final eight years ago. This time the winner will go up against Mark Williams or Jack Lisowski  in Sunday’s final.

World number 14 Bingham, who beat Ali Carter here in the 2020 final, has been the most prolific scorer of the week so far having made five centuries. That’s some turnaround in form for the 46-year-old who struggled through the first half of the season, failing to reach a single quarter-final.

The opening frame came down to a safety tussle on the colours, and Ball-Run enjoyed a slice of good fortune with a fluke on the green which set him up for 1-0. But there was nothing lucky about his performance over the next three frames as breaks of 78, 128 and 107 stretched his lead to 4-0.

In frame five, Murphy trailed 26-30 when he missed a long red, and Bingham punished him to extend his advantage. And after gaining 24 points in fouls early in the sixth, Bingham added a run of 65 to seal the result.

“I felt nervous just before we went out, but when I walked out – what an atmosphere it was,” said Bingham. “Once I sat in my chair I was able to focus. I got a bit lucky in the first frame which settled me down, and after that I went from strength to strength. Shaun missed a couple and I cleared up what he left me – it was an unbelievable performance. “This crowd is second to none – it’s an honour to play out there. I have been on both ends of it – I have been embarrassed and ashamed. But when you play like that it’s the best place ever.

“If I play like this I’m sure I’ll give Judd a good match. I’m riding a wave and long may it continue. The way I’m playing I back myself, but Judd can turn it on when he needs to.”

Murphy said: “It was an incredible performance from Stuart and I could do nothing about it. I had a half chance in the first and fifth frames, apart from that I felt very comfortable in the chair. My safety was good but he dropped in two great long pots in the second and third frames. If he plays like that he’ll win, he was absolutely phenomenal. My preparation for this match was very good but I was beaten by someone who played like a super hero.”