Desislava has become one of the leading referees on the circuit in recent years and has taken charge of several ranking event finals including the German Masters, Players Championship and English Open. 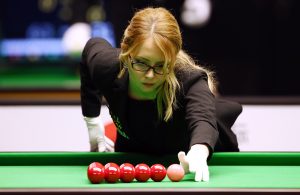 Growing up in her hometown of Sliven, she played pool and snooker before becoming a referee. She went to study in Sofia a few years later and became a member of the Bulgarian Snooker Referees Association, passing her exam to become an international referee in 2012.

Desislava’s debut at a WST event came at the 2012 Bulgarian Open. She took charge of a ranking final for the first time at the 2016 Riga Masters. Three years later she made her debut at the Crucible in the final stages of the World Championship.

Away from snooker, Desislava has a Masters degree in Landscape Architecture and creates 3D visualisations of homes. But building a career in refereeing is her main ambition.

First blood to the Whirlwind 🌪 White strikes first with a break of 49 to take the lead against Lisowski! 1-0 (9) #BVEuroSeries 🇩🇪
x