Ding Misses Out On Allen Revenge 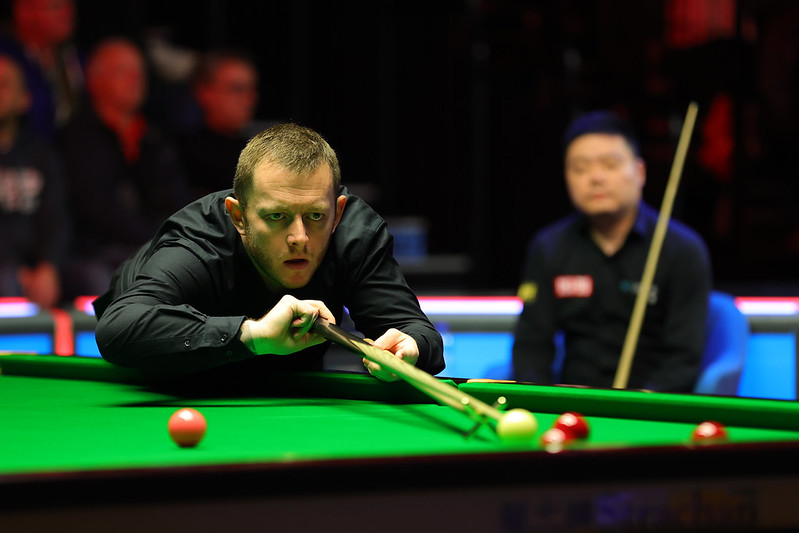 In a repeat of the UK Championship final, Mark Allen once again recovered from a slow start to beat Ding Junhui, this time by a 4-3 scoreline to reach the last 16 of the BetVictor English Open.

In York last month, Allen came from 6-1 down to see off Ding 10-7 and claim the UK title, and tonight he again proved a tough nut to crack as he won the last three frames with a trio of breaks over 80. Seeking his third title of the season and playing with a high level of consistency, Allen now meets Zhao Xintong or John Astley in round four in Brentwood.

A scrappy opening frame went Ding’s way and he made a 124 in the second for 2-0. The next two were shared then Allen compiled a run of 86 to close to 3-2. The Northern Irishman enjoyed a huge slice of luck at the start of frame six when, attempting safety, he fluked a red which set him up for a break of 94 for 3-3.

The key moment of the decider came when Ding, trailing 18-0, failed to make contact with a red when playing a thin safety, and caught the red on the way back up the table, leaving his opponent an inviting opportunity. Allen took full advantage with a match-winning 113.

“I wasn’t feeling well today – I had a headache and spent most of the day in a dark room, and at 3-1 my back was against the wall,” said world number five Allen. “The game brings different challenges and I enjoyed that tonight against a very good player. Because I have lost weight this year, I am not as tired in those situations and I get around the table better. Mentally I am in a very good place and most tournaments are won and lost on what happens between the ears.”

John Higgins enjoyed a tremendous fight back from 3-1 down to beat Robert Milkins 4-3. Breaks of 86, 56 and 62 gave Higgins the last three frames as he reached the last 16 of a ranking event for the first time this season. The result keeps alive Higgins’ hopes of qualifying for the World Grand Prix; he must reach the final this week to climb into the top 32 of the one year list and earn a place in Cheltenham next month.

Judd Trump top scored with 118 in a 4-0 win over Fraser Patrick, setting up a repeat of his BetVictor Scottish Open quarter-final against Thepchaiya Un-Nooh. Yuan Sijun had been among the chasing pack in the World Grand Prix race but he is now out of the running as he lost 4-1 to in-form Un-Nooh, who knocked in breaks of 125 and 122.

Mark Selby, looking to end a spell of 19 months without a title, top scored with 102 in a 4-1 defeat of Wu Yize. Neil Robertson beat Elliot Slessor 4-0 with a top run of 88 while British Open champion Ryan Day made a 70 in the decider to beat Ricky Walden 4-3, a result which leaves Walden uncertain of his World Grand Prix place as he’s currently in 31st position.

Seventh seed Kyren Wilson became the first player ranked among the world’s top 13 to be knocked out as he lost 4-1 to Jamie Jones, who made breaks of 73 and 102.