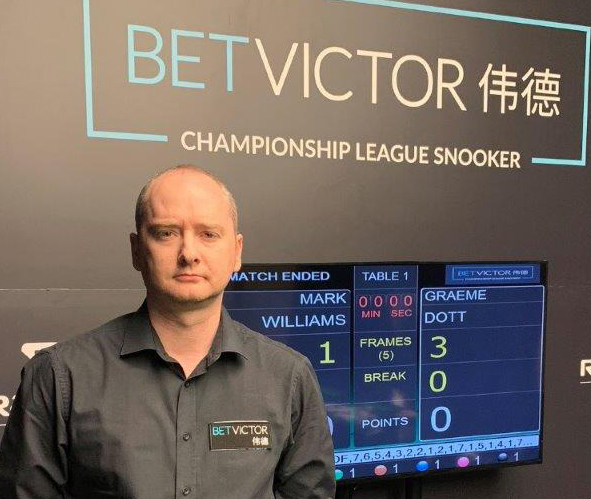 Graeme Dott is through to the Winners’ Group of BetVictor Championship League Snooker after defeating Mark Williams 3-1 in the Group 7 final at Morningside Arena, Leicester.

Dott was playing in his third group final of the campaign and won through to the big money Winners’ Group with success over the Welshman. Dott took the opening frame but Williams responded, only to trail again after the third. Williams looked on course to level at 2-2 but broke down on a break of 54 when he missed a red with the rest, allowing Dott to clear for the match.

Live coverage of the event is available on a host of betting websites and on zhibo.tv, one of the biggest sports streaming platforms in China.

“I have tried to get my money’s worth out of this,” joked Dott, who has now won £17,100 from this competition so far this season, more than the combined £13,000 he had won in seven previous Championship League campaigns.

“The table has played a bit differently this week so that could be a little advantage but that changes all the time, so we will have to see and the players coming in are that good that they will get used to it pretty quickly.”

In the semi-finals, Dott had beaten David Gilbert 3-0 while Williams had prevailed 3-1 against John Higgins. It was Higgins who had earlier topped the round-robin group table and also took home the group high break prize of £500 for his 130 against Williams on Monday.