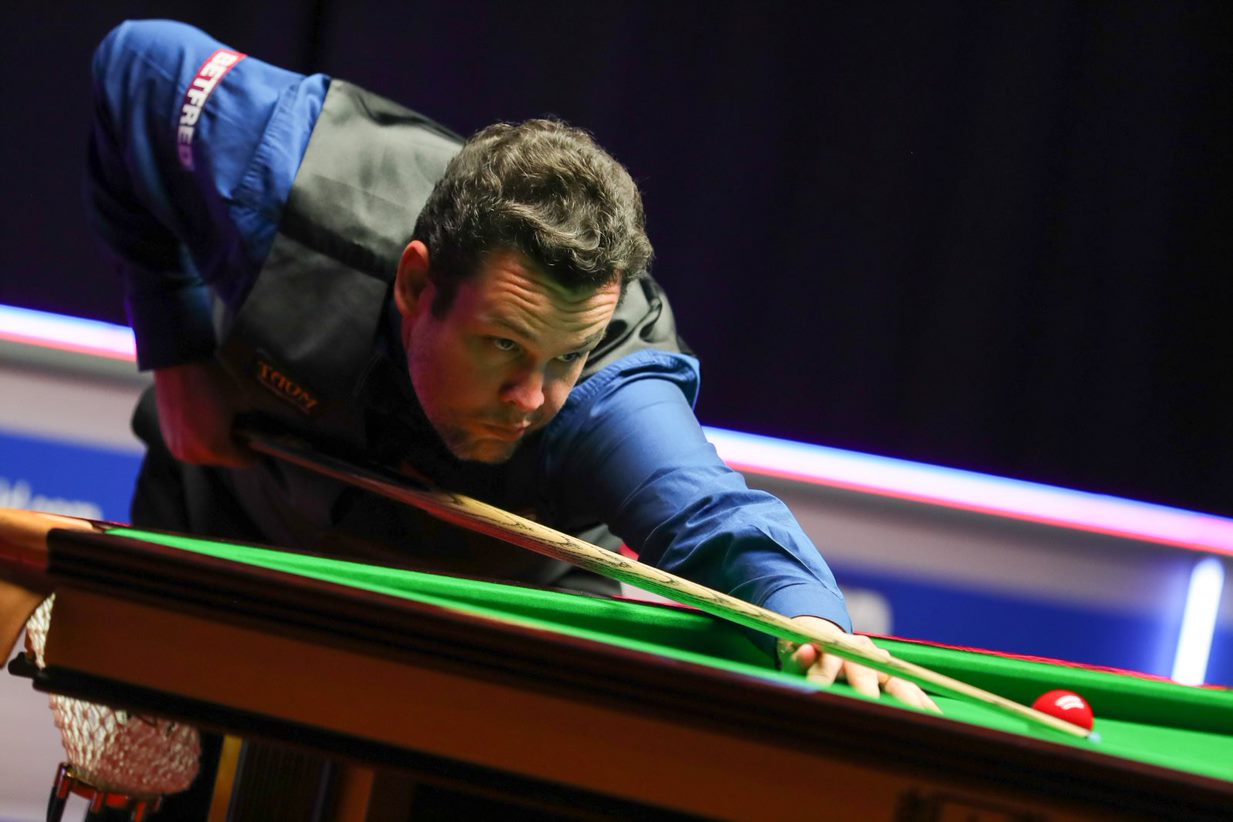 Brazilian number one Igor Figueiredo has gone over half a year without seeing his family as he battles to hit the heights on the World Snooker Tour and inspire a new generation of South American players.

Figueiredo won the Pan American Championship in 2019 to regain his place on the professional circuit and took the decision to permanently move to the UK in order to maximise his prospects of success. That meant he had to leave wife Claudete and his three children Stephanie, Igor and Elizabeth behind in Rio De Janeiro, relocating 5,887 miles to his current base at the Q House Academy in Darlington.

“I don’t have any sponsors or support, so I had a big decision over the last two years. I knew that I didn’t have any chance going back and forth. I needed to stay here and live here, to work every day and try my best. Travelling between the two countries would give me no chance,” said 43-year-old Figueiredo.

“I made this decision with my wife. I sold my car and used this money to make the leap and give it a go. It was very difficult to leave. I have two younger children and one older, my wife and my father who is getting older as well. I’ve done this to try and change my career, but also the landscape of snooker in South America. I want to inspire more people to play the sport and grow it.

“By getting in the top eight of the one year list at the end of last season, I now have two more years and I want to give it a real go. I am 43 now, so I don’t have too long to go in my career. I have to try and make the most of it.”

The Rio cueman was taught his craft on a small table in his family home by father Nilton, who is a former estate agent. From there Figueiredo would go on to make a living from competing in national tournaments in Brazil and money matches, although the latter quickly dried up when the wider public became aware of his considerable talent.

Figueiredo eventually set his sights on the professional ranks, but has been faced with many challenges throughout his career. In Brazil, they compete on 10ft tables as opposed to the regulation 11 ft 8½ in ones. Figueiredo’s first experience of a full size table came in 2009, when he was runner-up to Alfie Burden in the World Amateur Championship and earned his initial spell as a professional.

“In Brazil the tables are ten feet and there is a lot of pool. I had never even seen a full size table until 2009 at 32 years old. I’d never played full size in my life. I am just so happy because I think I have improved a lot,” Figueiredo explained: “My dad played with his friends in our house when I was younger. When he played I would wonder what he was doing and what was happening. He eventually would invite me to play at just five years old and I would see the balls collide and the cue actions. There was magic in my mind. From then I have never stopped for 38 years.”

Figueiredo enjoyed an impressive run at this year’s Betfred World Championship qualifiers, which brought him to the verge of history.

No South American has ever qualified for the Crucible before, but wins over Farakh Ajaib, Robbie Williams and Thepchaiya Un-Nooh took Figueiredo within one match of becoming the first. Unfortunately, he met his match on Judgement Day, losing a tight contest with Mark Joyce 10-7.

“I think it is the dream of all players to reach the Crucible, but especially for me. There was a lot of pressure as I may not have that many more chances. When the first player from South America qualifies for the Crucible, there will be a lot of attention on it. Whoever does it will hopefully open up a lot of opportunities for other South Americans. It is difficult to play only for the results like you have to in that tournament, because it is so important. It is easier when you are able to focus on your performance first.”

Despite narrowly missing out on an appearance at the Theatre of Dreams in April, Figueiredo did make his Crucible debut a month later at the World Seniors Championship. After scoring a 3-0 win over 1991 World Champion John Parrott in round one, Figueiredo defeated 36-time ranking event winner Stephen Hendry 4-1 to reach the semi-finals. Unfortunately his dreams of the title were ended by a 4-1 defeat at the hands of Jimmy White. Despite falling short, it was an experience that Figueiredo took great pride in playing in the sport’s most famous arena.

“It was great that I could still make history and be the first South American at the Crucible in the seniors. People in Brazil were very excited for me to play Hendry. He was my first hero. I saw him play on television in Brazil when I was younger. Now in the time of YouTube it is easy to see everyone, but it wasn’t like that then. I was very happy to beat him and people in Brazil were so happy with the result, although he retired in 2012 and has come back after a long time out, people at home still see him as the king. It was very good for me to get the win.

“Jimmy played well and solid in the semi-finals. I made mistakes and didn’t control my emotions. It was a good chance to get a title and the winner of the tournament would have had lots of further opportunities.” 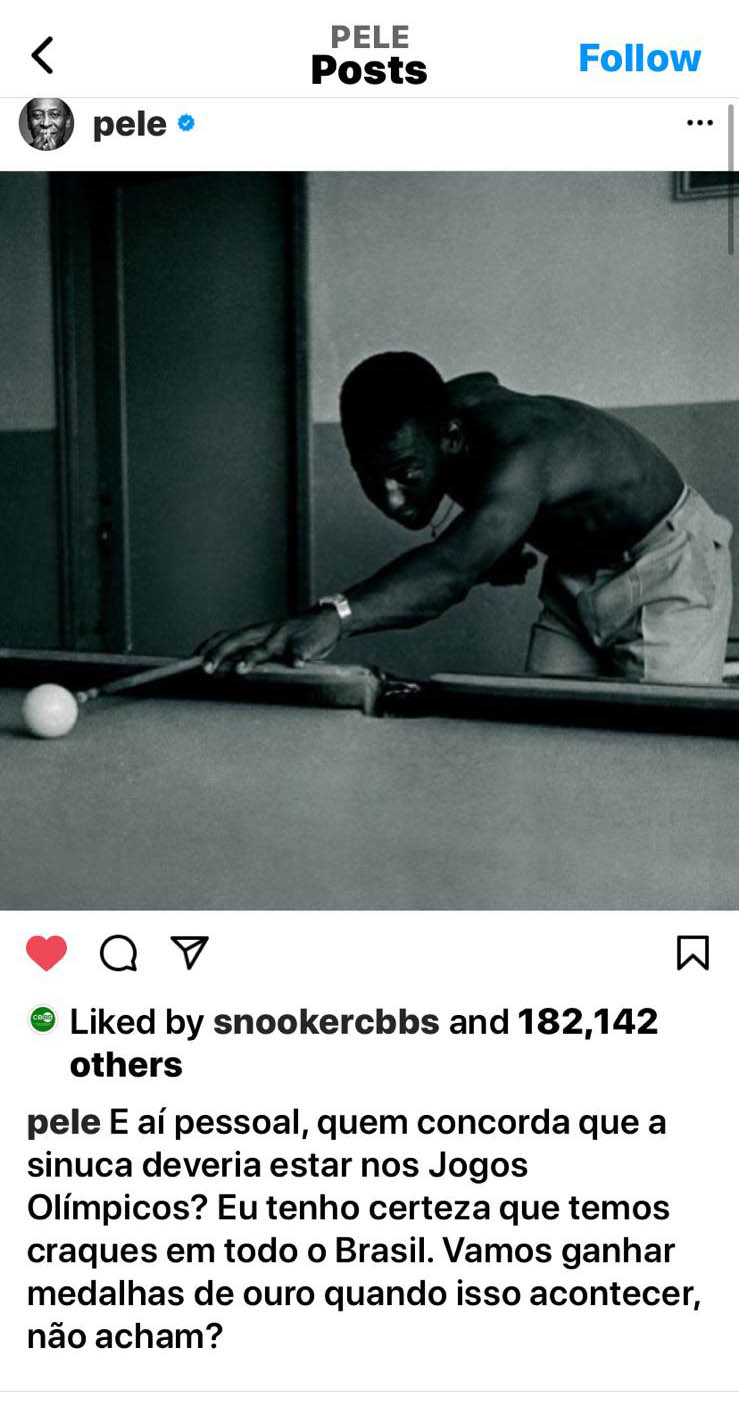 Just last month football legend Pele took to Instagram to state he felt that snooker should be an Olympic sport. Figueiredo believes that snooker could do more to harness the support of high profile figures in other sports to further its own Olympic cause. He says that snooker is very popular among some of Brazil’s most revered football stars.

“Neymar also likes snooker. Every football player from Brazil likes snooker. Neymar has a table in his house and you can see the picture of Pele playing. It is important to hear from these people and allow them to help snooker develop for new generations.

“I think it is very important for snooker. To get snooker to the Olympics would be crucial not just for prize money but sponsorships and funding for players. I think we need to use the voices of well known people to push it. These people can help snooker to get places as it is popular with a lot of famous people from other sports.”