Hamilton Aiming For Another Final 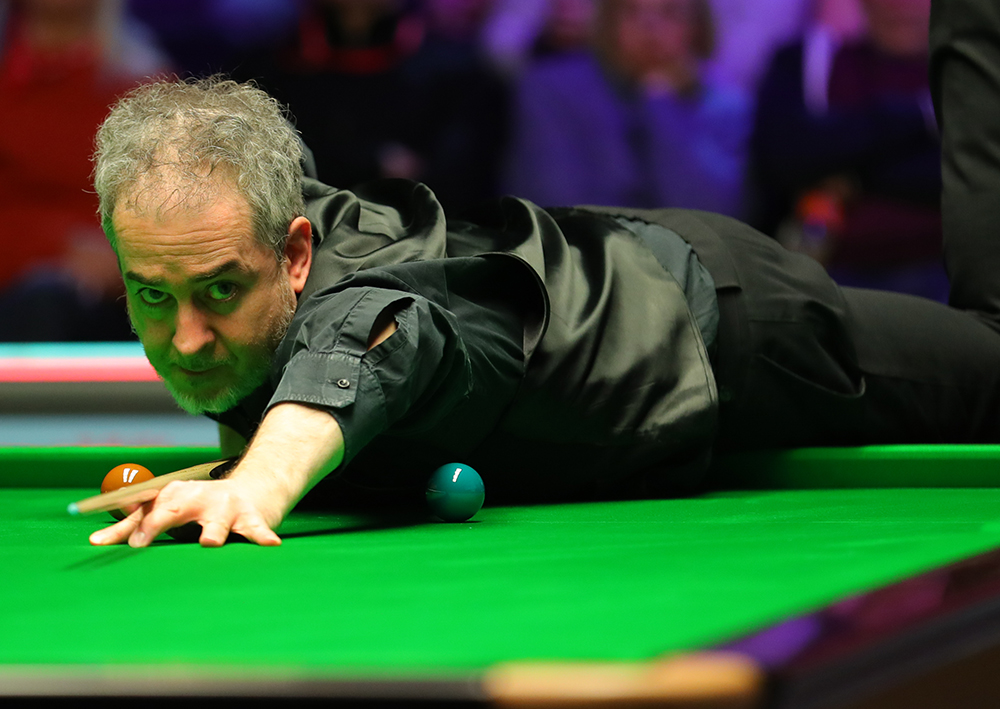 Former German Masters winner Anthony Hamilton is aiming to defy problems with his back and eyesight to reach another ranking final before the end of his career.

The Nottingham cueman underwent lens replacement surgery back in 2019, but the procedure didn’t go to plan and impaired his ability to perform in the match arena. He has also encountered back issues, which have hampered him over the years. However, he believes he is starting to learn to deal with these hinderances better and he has made a positive start to the new season.

Hamilton made the second stage of the recent BetVictor Championship League and defeated Mark King 5-2 to qualify for the final stages of the BetVictor European Masters later this month. The 52-year-old will now face Jamie Jones over in Furth.

He landed his only ranking title to date, when he beat Ali Carter in the final of the 2017 German Masters. Hamilton’s other two final appearances came at the 1999 British Open and the 2002 China Open.

Anthony, how would you assess the start you have made to the new season?

“I think it couldn’t have gone much better so far on the snooker front. It is a bit surprising that I’ve found a bit of form, as I haven’t had that much practice. I was speaking to Ricky Walden yesterday about all of the Chinese dominance in the Championship League. They have practised all through the summer and they aren’t missing a ball. You can see the difference in lifestyles immediately on the table. We are still stretching our backs and they have been doing six hours a day.”

What is the current situation with your back and eyesight problems?

“Nothing has changed really, on either front. They are both chronic problems, so I just try to live with them and deal with them these days. They hamper my skill levels quite a bit, so the days of me trying to hit the heights of really good snooker might be out. I am just happy to plod along, make a living and treat every year as if it might be the last one of my career. I am enjoying the process of going down to the club. As you get older you realise that it is better than you thought it was when you were younger. That happens a lot to people, they don’t realise what they have until right near the end.

“It isn’t the predominant thought in matches now, like it was in the first season. All I could think about at that point was what I couldn’t see. I’ve stopped doing that, got used to the issues and got on with playing snooker. I can still miss anything because of it. I have come to terms with that and now need to be ultra zen all of the time. That is hard for snooker players because we have certain standards that if we drop below it is hard to deal with. If you are going to be sensible, you need to realise there is a new standard which is lower. There is no point getting the hump when you play that standard because it is going to happen.”

What is your main target going forward for the rest of your career?

“Another final is the goal. Hopefully it can be in a proper tournament, like Joe Perry had at the Welsh Open this year. You never know what can happen. Some weeks just fall your way and before you know it you are in the final. To enjoy that day of the final would be great, win or lose. There is nothing better. I’ve lost two and won one and I have loved all of them. I just want another day where you struggle to sleep the night before the match, you wake up and feel 16 again with the nerves on edge. I’m always really chuffed for players who don’t make many finals when they do get into one. It is an amazing buzz.

“It is such a big deal just to get your head right to play snooker at any point, let alone a final. It is something you enjoy retrospectively. There is too much in it when you are in the moment. Everyone you are playing is an absolute machine and any sign of weakness will be pounced upon. It could even just be crowd watching and taking it in, before you know it you will be 4-0 down. You enjoy the buzz after the match is over. That is the time when you enjoy it. Luckily for me I’ve always played well in my finals so I only have good memories. It is easy for me to talk about them being great. Others have crumbled and they might not have such great memories.”

Looking back on your career are you satisfied with what you have achieved?

“Not really. I appreciate it more now because I am getting more out of myself in terms of the effort I put in. I am a slow learner, so what I know now could have been invaluable when I was younger. If I could put myself into my 20 year old body, I think I could have won six or seven tournaments. That is easier said than done. That is why we revere the best players, because they learn it when their skill levels are at their peak. That is the thing about great sportsmen, is they learn straight away. It isn’t easy to learn a system to be able to get yourself through these big matches and big games. I am 51 now and I’ve worked out a lot of what is needed, but it is too late.

“It is all psychological and lifestyle based. When I was in my 20s I didn’t consider myself a snooker player, I was a person who played snooker. I enjoyed myself too much. I had a great time and I don’t regret any of that, but if you want to be a sportsman you have to be more dedicated. I had too many late nights and too much enjoyment. You can’t burn the candle at both ends. That was the best part of my life so I don’t regret it.” 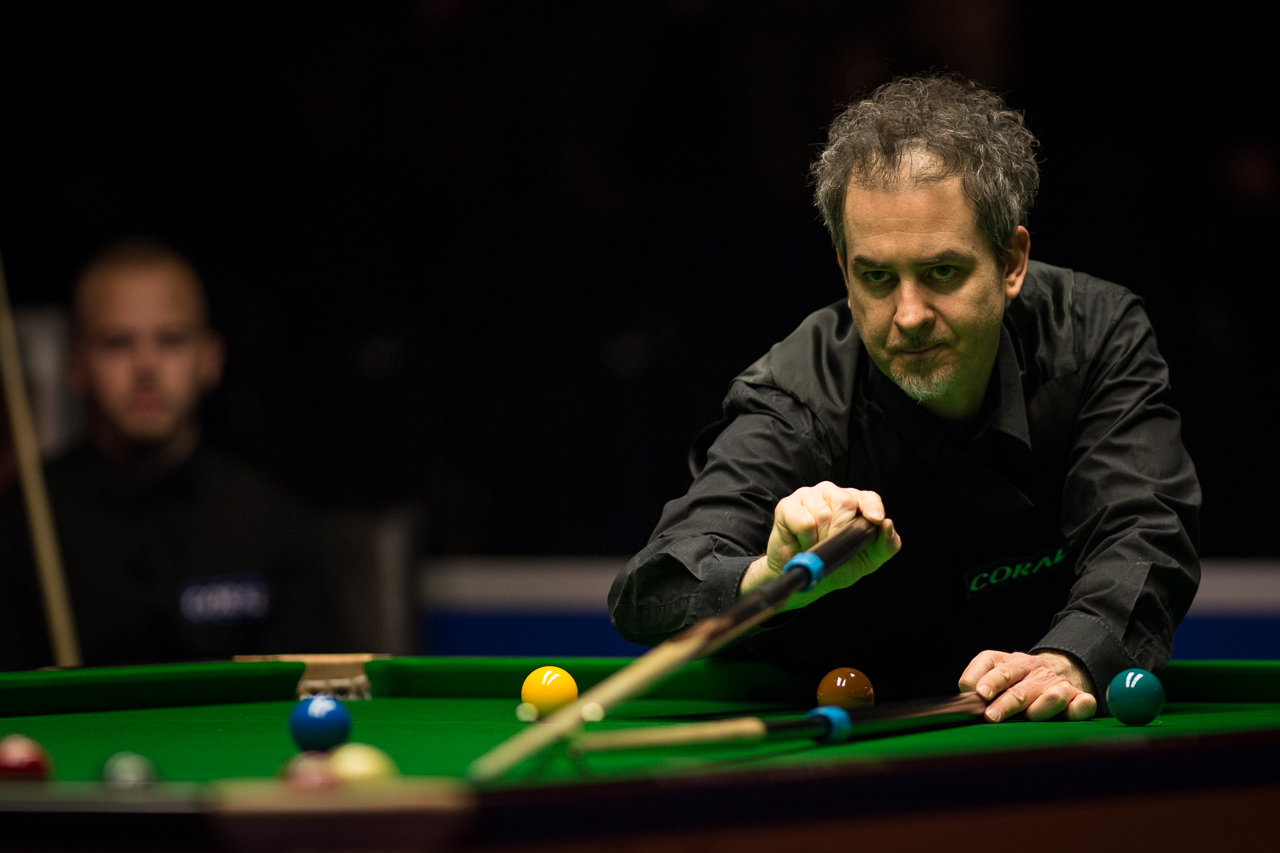 When you are finished playing would you like to take on a coaching role to impart the knowledge from these things that you have learned?

“That is the plan I think. I would love to be a coach to a few young professionals or up and coming players, who need a bit of guidance. I think I have empathy for snooker players. I know how hard it is. I hope that I could improve players by five or ten percent and have a laugh with them. Terry Griffiths was the best coach, because he had been there and done it. He was a straight talker and a laugh as well. You can’t beat that. At the moment I think there is a gap for that. Chris Henry is a great coach, but he hasn’t really got the first hand experience like Terry used to have. I think there is a void there for young players.

“I can definitely see the mistakes in the young players and their approach. I make them myself as well, you can fall into bad traits. You can see they are putting in loads of hours on the practice table. However, they are doing nothing on the mental side. It is just as hard to keep that as sharp as the cue action. It takes just as much dedication to do it as it isn’t fun. Human nature makes us want to throw the toys out of the pram after the first thing which goes wrong. To go against that isn’t fun, but if you can stay in the moment and all of that business, it reaps rewards immediately. If you are a 30 year old, who still isn’t putting the hours in mentally, you need to do it. That is a decision they have to make and if they don’t do it they will make all of the same mistakes which I used to do.”

You have obviously taken the coronavirus pandemic very seriously and were strict with yourself on exposure to others. How much are you enjoying having a bit more freedom now and what have you been up to over the summer?

“I almost can’t remember the lockdown. We want to banish it from our brains because it was that bad. We are able to talk about it because we are still here. There are a lot of people who are worse off that it sadly affected more severely. Personally it is great to be out and about, but I am taking it for granted again. That is how we work as humans. We banish the dark days and pretend they never happened. They were dark days. The first few times in the pub I was loving it and taking it all in. A few months later it is just normal.

“I went over to Paris to watch the French Open tennis this year. I love all tennis but that is the blue ribbon event. I got tickets to the quarter finals. I really wanted to see Rafael Nadal, but of course I got tickets to the afternoon and he was playing in the evening. I was a bit gutted but the experience was amazing. You are in the best city in the world, in a nice part of the city which isn’t touristy. It is the most French thing you will ever do. I loved it. The whole thing was very sophisticated, they love to live the lifestyle. It is a laid back atmosphere. The food was top quality French cuisine. I don’t know why I came back to be honest!”