Inside The Crucible – Rob Walker 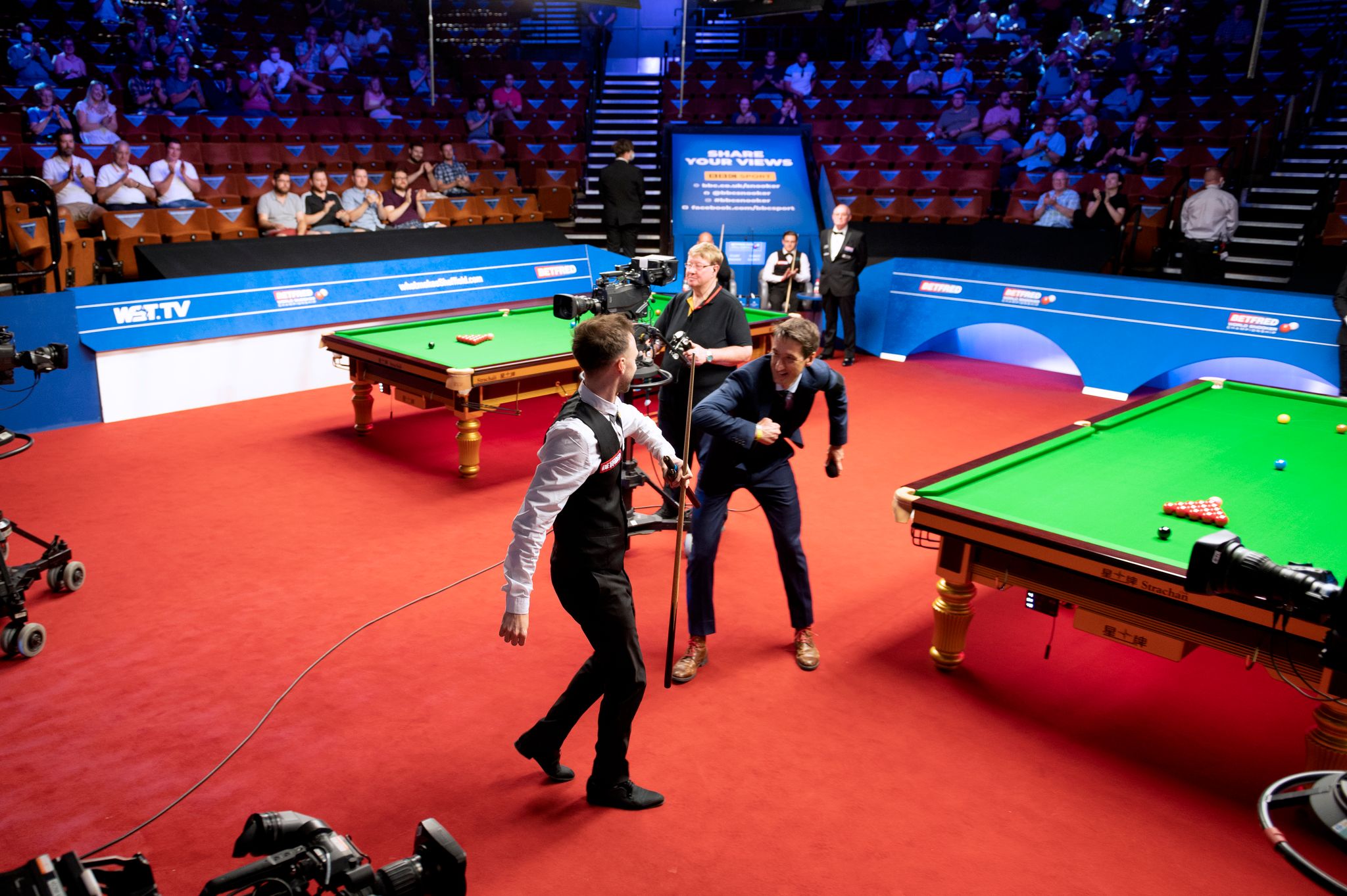 Walker introduces Judd Trump as defending champion in front of a limited crowd on day one.

This year’s Betfred World Championship is unlike any other in the history of this most prestigious of snooker tournaments. With the event being forced behind closed doors after just one day, the circumstances in Sheffield are very different to the norm.

Staging the 2020 edition of snooker’s Crucible pilgrimage during the coronavirus pandemic has required extensive planning and safety measures. For those inside the highly sanitised Crucible Theatre, it has been a unique experience.

Throughout this year’s event, we are speaking to some of the key figures backstage. This time, it’s the turn of Master of Ceremonies and commentator Rob Walker…

Walker’s introductions have become synonymous with snooker’s Theatre of Dreams over the last 13 years. In a normal running of the event, his role as MC requires him to whip the anticipant Crucible crowd into a fervour before snooker’s gladiators take to the stage. This year, Walker is instead tasked solely with setting the tone for millions of viewers back at home in front of a deserted arena.

Walker believes that it is also important from the perspective of the players to establish some semblance of normality before they enter the Crucible cauldron for action, as well as bringing additional insight for the viewers at home. This year for the first time, Walker is starting some of his intros from beside the players backstage, before heading front of house.

“I felt that if we were to still do walkons, we needed to do something to get people at home engaged with what was about to happen,” explained experienced broadcaster Walker.

“If there is atmosphere anywhere in the venue, it is in what I call the prowling around area just as the players are about to come out. That does not change and they are still waiting for an opportunity to win a match at the World Championship. Once they get out there, they start focussing on the opponent, the context and see the television cameras. I would suspect it isn’t all that different for them.

“I do think it is still quite important, from a psychological point of view, that we replicate as much as possible about the commencement of a match. Part of the role of the MC is usually to get the crowd interested and involved in what they are about to watch. Aside from that, my job hasn’t changed that much. I still have to deliver a piece to camera to the viewer back at home and I still have to give the four players a decent introduction. The intonation is obviously toned down and more subtle. However, the television side of things is very similar.

“I think the top players notice the difference of there being no crowd. They all react differently though. Some give it the ironic wave when they come out and some shrug it off. You can tell with John Higgins and a couple of others that they are smiling to themselves in the realisation of how weird it is. Whereas someone like Mark Williams wouldn’t even notice it, he’s not worried about anything!”

This year, Walker has been combining his MC and reporter roles with commentary duties. He regularly takes up the commentary position in some of the biggest events in athletics, but this is the first time he’s stepped in the box at the Crucible Theatre. The dual role does mean that on occasions, Walker is required to make a quick dash to the box after the introductions.

“The first time I sat down, they had to ask me to speak more quietly, because my voice was incredibly loud. I’d just come off set to do the intros, where a completely different voice level is required. Commentary is slightly different in snooker to other sports. You have to be really conscious to let the action breathe. As always, you defer to the expert in terms of the technical stuff. It’s not my place to start giving analysis. My job is to tell the story, I understand the context and know things about these guys. I try to encourage my co-commentators like Alan McManus or Joe Perry to give the technical insight. I’ve really enjoyed doing the commentary and it has given me an added appreciation to snooker.”

During the event Walker bases himself, alongside a limited selection of journalists and officials, in the media centre, which is operating under strict Covid-19 measures. Each person has their own individual workstation and cannot change tables throughout the event, with any interviews being carried out at a strict social distance. Despite the differing circumstances, Walker is extremely grateful that the World Championship has gone ahead.

“The press room has been strange,” admitted Walker. “I’ve been lucky that I’ve had some work over the last few months, but aside from the practical elements of life, I’ve really missed working. Becoming a sport broadcaster is more like a way of life than a job. Your life runs in cycles of events and tournaments. I feel privileged to be doing my job again. Even if the press room is different, we have still had a laugh. Snooker has been front and centre in the return of sport. Not many people have been allowed inside the venue to work at this year’s event, I’m very happy to be one of them.”