A group of young snooker and billiards enthusiasts in India have gained knowledge and earned certificates through the World Professional Billiards and Snooker Association’s White to Black coaching scheme. 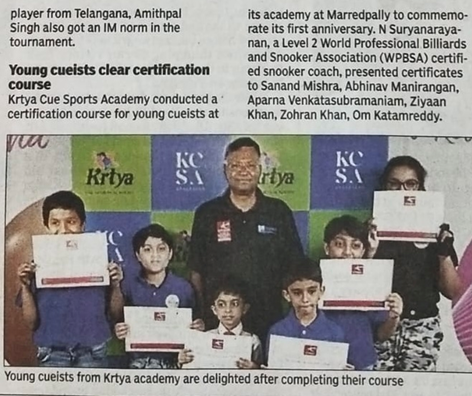 The achievement was reported on by The Times of India both in their written newspaper and on their website.​

Suryanarayanan is one of Asia’s most successful coaches, having produced and guided players to 80-plus medal wins in regional, national and international snooker and billiards events since 2010. He is also a qualified referee and has officiated at several continental and global events.

The lessons were held at the Krtya Cue Sports Academy located in Secunderabad. Having just celebrated its first anniversary since opening, the venue maintains state-of-the-art playing conditions and facilities, and is focused on developing young Indian cueists in a safe, enjoyable and conductive environment.

One of India’s leading players and former Asian Games Gold Medalist Rafath Habib recently visited the Academy and was very impressed with the set-up.