Teenager Robbie McGuigan became the youngest ever winner of the Northern Ireland Amateur Snooker Championship following a 10-4 victory over Rab McCullagh in the final of the 2021 edition held at the Antrim Sports Bar.

Aged 17 years and 11 days, McGuigan – who was ousted by Declan Lavery in a deciding frame in the 2020 title match – eclipsed former benchmark Mark Allen by a couple of months to set the new all-time record.

One of the world’s oldest national snooker championships, the competition dates back to 1927 and has been won by two-time world champion Alex Higgins, former Masters champion Allen and current Welsh Open ranking event winner Jordan Brown. McGuigan’s name is now etched on the same iconic trophy. 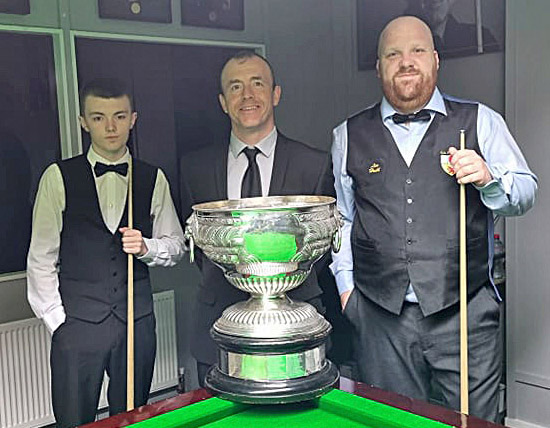 Held across three weekends, a total of 76 players entered. McGuigan navigated the earlier rounds defeating Ronan Wilson 3-0 with breaks of 109, 80 and 61, Eamon Ferris 3-1 with efforts of 85, 63 and 76, before producing two breaks in the final two frames to turn a 2-3 deficit into a 4-3 win over Colin Anderson in the last 16.

Returning for Finals Weekend, he eliminated Gary Clarke 5-2 in the quarter-finals and squeezed past record eight-time winner and former world championship quarter-finalist Patrick Wallace 6-5 in the last four. Runs of 76 and 56 helped the youngster on his way to a 5-2 lead, but he constructed a 57 in the decider having watched his experienced opponent claw his way back level.

A new champion was guaranteed as waiting for McGuigan in the final was first-time finalist McCullagh who made breaks of 81 and 63 when defeating Ryan McQuillan 5-3 in the last eight and then top scored with an 86 as he saw off Raymond Fry 6-1 in the semi-finals.

After the opening frames of the final were shared, McGuigan built up a 4-1 advantage, although McCullagh kept in touch by reducing his arrears to only one. However, the former Challenge Tour event finalist finished off the opening session in style with runs of 93 and 129 – the highest of the tournament – before further contributions of 55 and 91 on resumption aided him on his way to creating history.

Defending champion Lavery – who also triumphed in 2019 – had his hopes of three-in-a-row dashed in the first round by Kevin Quinn, 3-0.

A few weeks before at the St Pats Snooker and Billiards Club in Magherafelt, there was also a new winner in the Northern Ireland Under-21 Snooker Championship as Christopher Clifford took home the top honours.

Former finalist Clifford went one better than his 2019 run by denying Jamie Gardiner 5-4 in the final to lift the Con Egan Trophy.

The 19-year-old defeated Shea Valentine 3-0, Shea McConville 3-0 and McGuigan 4-1 on route to the final. 18-year-old Gardiner dethroned reigning champion Fergal Quinn 3-1 on his way there.

Thank you to Northern Ireland Billiards and Snooker Association Tournament Director Simon Cooke for his assistance in compiling this article.