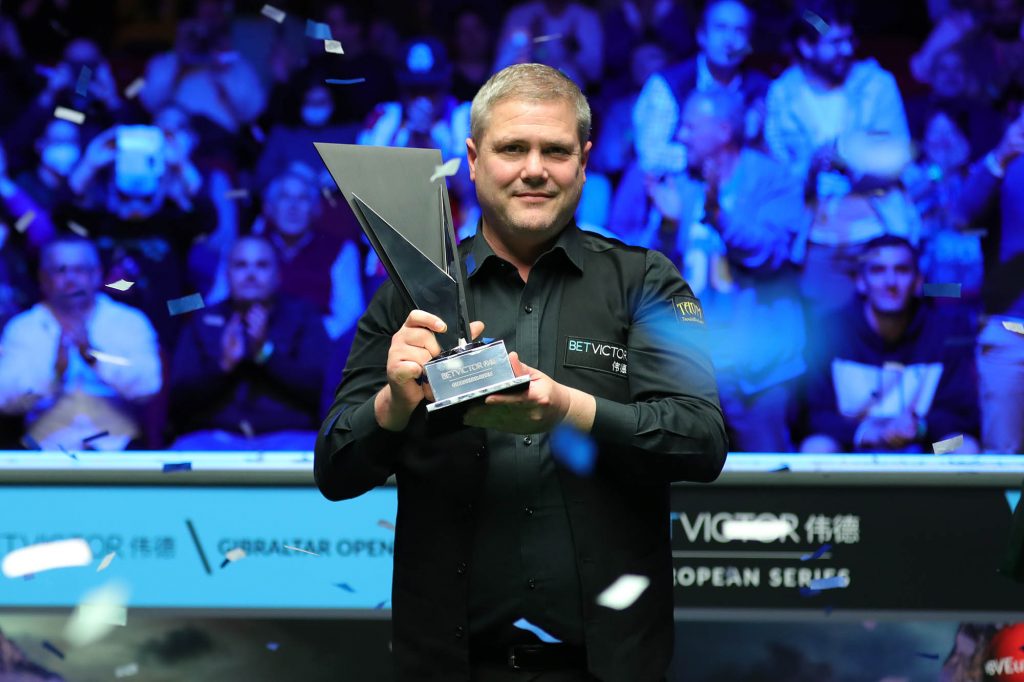 Robert Milkins won the first ranking title of his 27-year career, beating Kyren Wilson 4-2 in the final of the BetVictor Gibraltar Open.

Gloucester’s 46-year-old Milkins turned pro back in 1995 and had previously appeared in six ranking event semi-finals but never a final – until today as he enjoys undoubtedly the best moment of his career. He becomes the oldest first-time winner of a ranking event since Doug Mountjoy at the 1988 UK Championship.

And his success is all the more remarkable given that he had won just three matches all season prior to this week. Seven victories on the bounce have given him by far his biggest pay-day of £50,000.

Milkins’ triumph also comes just three weeks after one of the lowest moments of his time in snooker: drunken escapades during the opening ceremony of the Nirvana Turkish Masters for which he faces WPBSA disciplinary action. That incident was perhaps the result of the pressure the father-of-three felt to turn his form around and provide money for his family. One of the sport’s more naturally talented players who is popular with his peers for his usually affable nature, Milkins can now look forward to a brighter future having fulfilled at least part of his potential.

Having joined a list of first-time winners this season – alongside David Gilbert, Zhao Xintong, Hossein Vafaei and Fan Zhengyi – Milkins will earn a debut in the Cazoo Champion of Champions later this year and shoots up the world rankings from 43rd to 28th.

Other than Milkins, no one had more cause to celebrate the day’s results than John Higgins. The 46-year-old Scot banked the huge £150,000 bonus for topping the BetVictor Series rankings after the eight counting events. Higgins had a nervous wait for most of the day, but was sure of the bonus after Ricky Walden lost narrowly 4-3 to Wilson in the semi-finals. Read more on that story here. 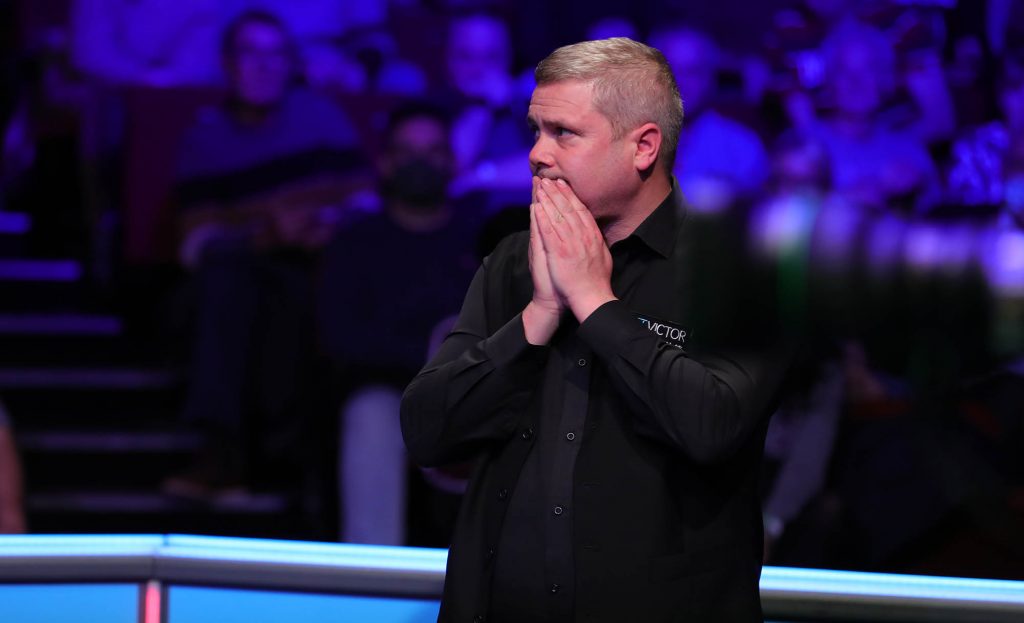 Wilson could have leapfrogged Higgins in the race to qualify for the Cazoo Tour Championship by winning the final, but misses out on that eight-man event which starts on Monday in Llandudno. World number five Wilson reached his first ranking final of the season and earns £20,000 as runner-up, but the Kettering cueman will surely see this as an opportunity missed. He has now lost seven of his 11 career ranking finals.

Wilson looked on course to take the opening frame until he missed a tricky black to a top corner on a break of 59, letting Milkins in for an excellent 71 clearance. The second came down to a long safety battle on the yellow, and Wilson, trailing by 19 points, created a chance but then failed to clip the yellow into a baulk corner, and Milkins took advantage for 2-0.

Early in frame three, Wilson overcut a red to a centre pocket on 14, and once again his opponent punished him, making 62 which proved enough to put him three up with four to play. Milkins had a brief glimpse of the finish line in the fourth, but failed to convert a tricky red to a top corner, and Wilson’s 65 made it 3-1. Another chance came and went for Milkins in the fifth as he missed the pink to a centre pocket when he trailed 27-18, and eventually lost the frame after being trapped in a tough snooker on the last red.

Wilson had the chance to extend the fight-back in the sixth, until he missed a difficult pink to centre when he trailed 30-10. This time there was no mistake from Milkins as he kept his composure in a match-winning run of 44. 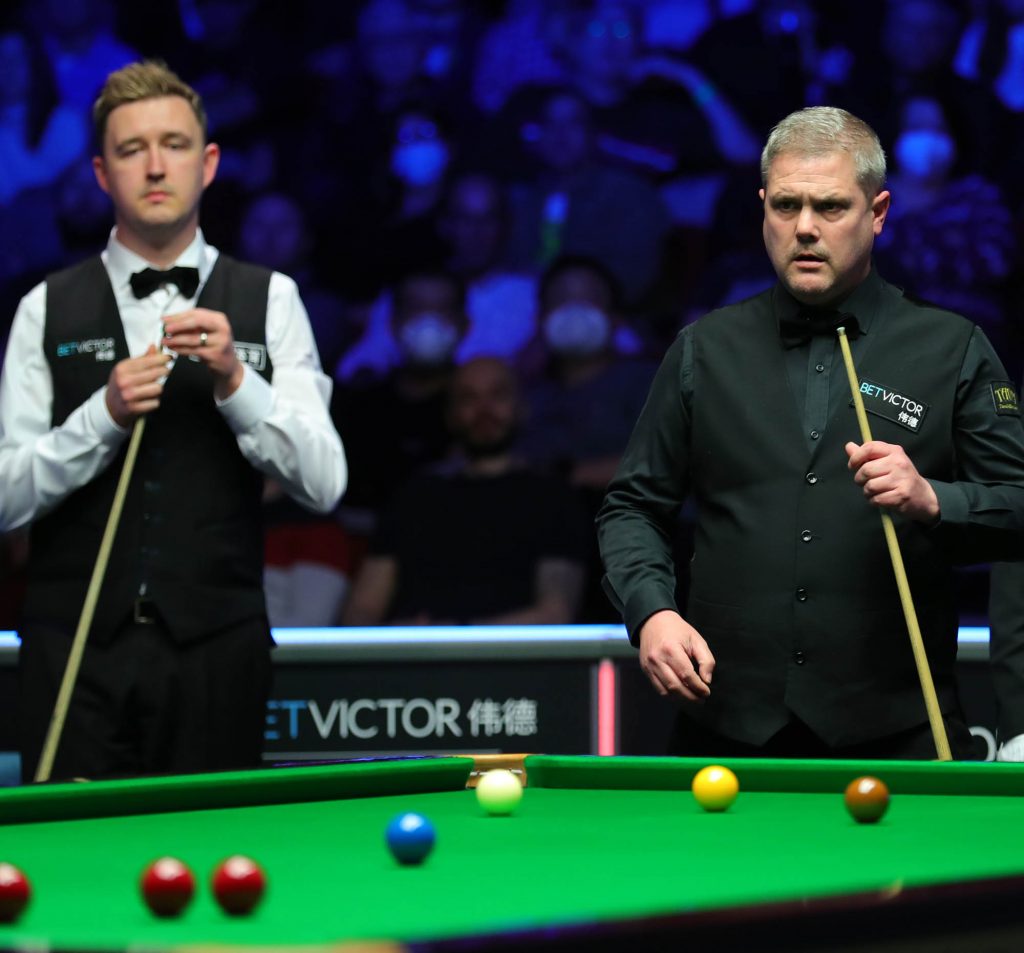 Milkins is the fourth fastest player on the tour this season, with an average shot time of 19.29 seconds

“It has been a long time coming,” said the player nicknamed the Milkman. “I have worked all my career for this, it’s a dream come true. It’s hard to keep practising and not getting the rewards, but a moment like this makes it all worth it. To be honest I didn’t think I’d ever see this day. Things haven’t been going well for me recently and I couldn’t see it coming.

“I have had times in my career where I have felt I had a chance to win tournaments, but recently I haven’t even seen myself winning a match. The standard is so good now, and next season I could have been struggling to stay on the tour. I’m glad this has happened now because I certainly haven’t got much time left! This has changed things for me. I love Gibraltar, it’s one of the best venues and a place to enjoy. Thank you to the fans because they have been great.

“I would like to dedicate this trophy to the people around me I have lost and who can’t see me here today – my mum and dad, and other people.”

Wilson said: “This is a special moment for Rob so congratulations to him. I wasn’t there at all, I lost my cueing in the final. If I had taken the first frame I might have settled and left Rob cold, but he made a really good clearance. After that it was very twitchy. I tried to make a fight of it from 3-0.”