Luke Pinches is just two wins away from following in the footsteps of father Barry and earning a tour card through Q School. 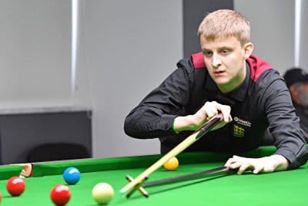 Norwich potter Pinches, age 19, is through to the last 16 of Q School for the first time and will face Mark Lloyd next. The four quarter-final winners on Sunday in Sheffield earn a two-year tour card, as do the next two highest players on the Order of Merit.

Luke’s father Barry, age 50, came through event two earlier this week. If Luke successfully follows him, they will join Peter and Oliver Lines as father-and-son duos on the pro circuit. In the last 32, Pinches beat Callum Beresford 4-1.

Veteran David Finbow, who reached number 28 in the world during his 1990s peak, could return to the tour for the first time since 2004. The 53-year-old came from 3-1 down to beat Dylan Mitchell 4-3.

Joshua Cooper – nephew of Shaun Murphy – beat Robbie McGuigan 4-1, setting up a match with China’s Si Jiahui. Duane Jones saw off Michael Georgiou 4-1 and will now face a Welsh derby against Michael White. Two-time ranking event winner White let slip a 3-0 lead against Hammad Miah 4-3, but made a 74 in the decider to win 4-3.

The last 16 takes place on Sunday from 10am, followed by the quarter-finals from 1pm.