Robertson Knocked Out By Perry

The last two winners of the Cazoo UK Championship are out of the tournament already in York, as Neil Robertson followed Zhao Xintong out of the exit door after losing 6-2 to Joe Perry.

Robertson won this title in 2013, 2015 and 2020, but has since won just four frames at the Barbican as he lost 6-2 to John Astley last year, and by the same scoreline today. The world number two was unwell with a cold, but insisted that there were no excuses as he was outplayed by close friend Perry. 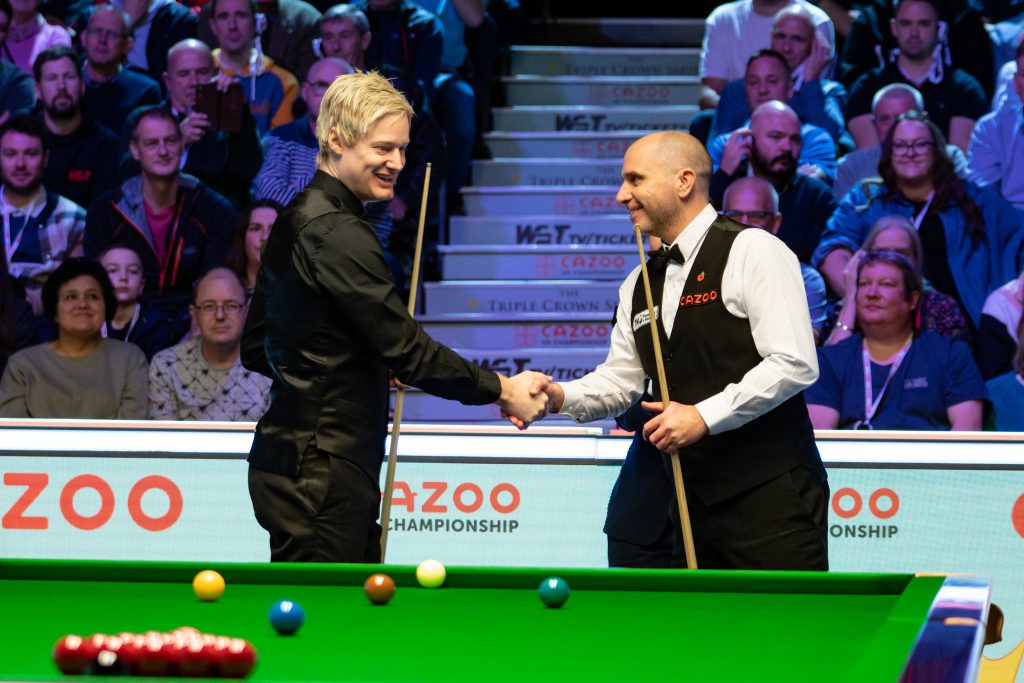 Australia’s Robertson was player of the season in 2021/22, winning four titles, but having elected not to enter the first three ranking events of the current season, he has now left himself in danger of missing out on the World Grand Prix. The 40-year-old is currently 39th on the one-year ranking list and could need a deep run in either the Scottish Open or English Open to get into the top 32.

In the final qualifying round last week, Perry beat Graeme Dott 6-0 with what he described as his best performance since winning last season’s Welsh Open. He carried that form into today, dominating from the early exchanges. The 48-year-old from Cambridgeshire goes into the last 16 to face Stuart Bingham or Liam Highfield.

The Englishman had a chance to clinch the result in frame seven, but missed the pink to a centre pocket when he trailed 21-26 and his opponent punished him with 62. Robertson had an opportunity to further reduce the deficit in the seventh, but at 41-0 he left a tricky black in the jaws of a top corner. This time there was no mercy from Perry, who cleared with 64.

“I could see Neil wasn’t a hundred percent, but that probably made my task a bit more difficult. Not on the table, but to deal with that sort of emotion, I had to really keep my concentration and focus,” said world number 30 Perry. “I’ve always liked playing Neil because he’s such a great person around the table, he’s always so well behaved, and he brings out the best in you.

“I’ve always felt relaxed around him because we’ve spent much of the past 20 years, together. He knows what I’m capable of, I never feel like I have to impress him, he knows what I can do.” 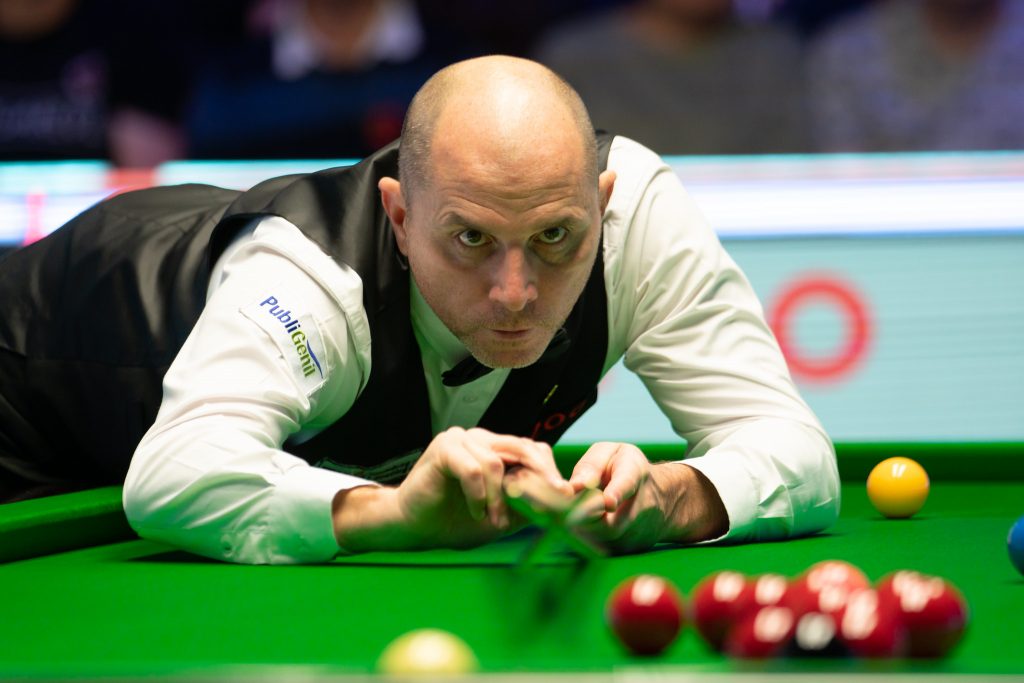 Perry is very much a fan of the change in format and new fan experience at the Barbican this year. He added: “I love the whole set up, the fact that you can just walk in, get on the practice table no problem. You could tell in qualifying, it was a big deal to qualify and get here, and then once you’re finally here it’s even better.”

Robertson said: “Joe played really well. His strength has always been his scoring and positional play around the balls. When he’s knocking in long pots, and his safety was excellent, he’s tough to beat.

“I wasn’t feeling great but with the way Joe was playing today I would have had to be at my best anyway. I downed a Red Bull at the interval, guzzled it down, and it did actually help. I tried, you always have to, things can turn around. I got back to 5-2, but then rattled the black and he made a very clinical finish. It’s good to see because he’s a friend and I always want to see him do well. Now I’m out, I hope he wins it.”

On table two, last year’s runner-up Luca Brecel came through a tough test against Lyu Haotian, winning 6-4. Belgium’s Brecel played outstanding snooker in York 12 months ago before losing to Zhao in the final, and has since won the Scottish Open and Championship League. 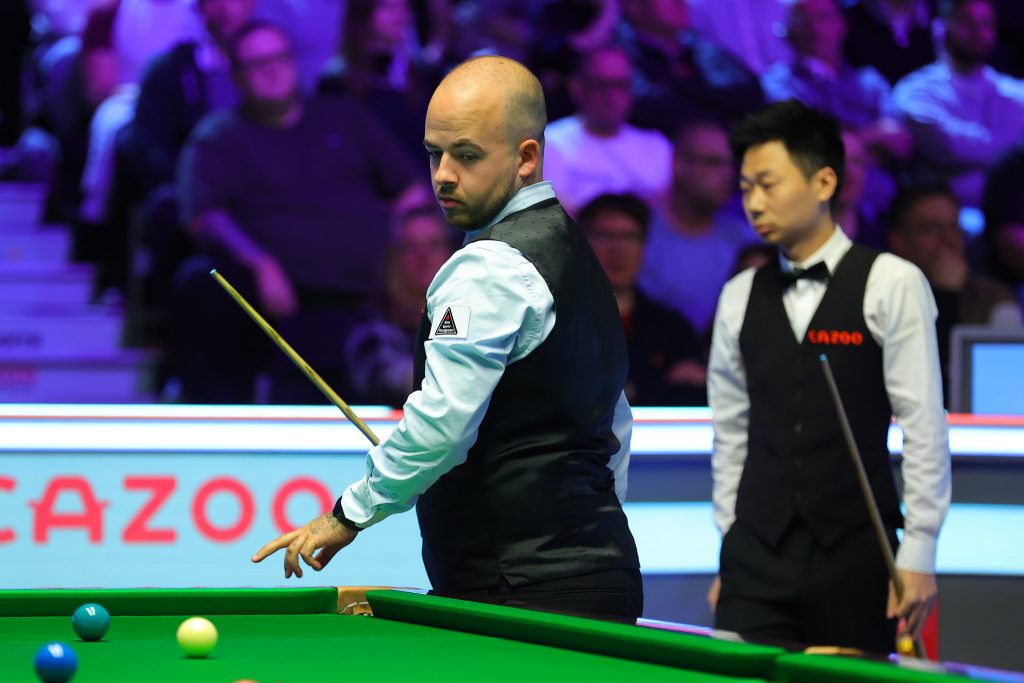 Brecel made 55 in the ninth before under-cutting a tricky red to a top corner, and Lyu cleared with 79 to close to 5-4. The tenth came down to the colours and Lyu, trailing 42-49, missed a tough pot on the yellow to a baulk corner, which proved his last shot as Brecel clipped home the yellow to a blind pocket and added the points he needed.

“I’m happy with how I won the match in the end,” said Brecel, who now plays John Higgins or Tom Ford. “Reaching the final last year set me up nicely and I’ve had some good results and some nice tournament wins. It’s like I’m a different player now. Every time I come to a tournament now I’m thinking ‘win it’, and before we were looking at quarter-finals, maybe semi-finals.

“It takes a lot to get me excited but this time I felt quite excited when I saw the set up and the crowd were amazing. The tables were nice as well, so it’s perfect – like a dream. It felt a bit like the Crucible. You can just feel it’s such a big tournament and it’s great to still be in.”