Mark Selby strengthened his status as one of snooker’s all-time greats by beating Shaun Murphy 18-15 in the final of the Betfred World Championship to conquer the Crucible for the fourth time.

In an exciting contest, Selby came from 6-4 down to lead 17-13, then saw Murphy battle back with two centuries, before getting over the line in the 33rd frame to take the silverware and a career-high pay-day of £500,000.

Champion in 2014, 2016, 2017 and now 2021, Selby has lifted the trophy four times in seven years; no other player has won it more than once in the same period. He becomes only the fifth player to take the title more than three times at snooker’s Theatre of Dreams.

His game is purpose-built for the challenges of the 17-day Sheffield marathon. Seemingly boundless stamina, fierce concentration, an unrivalled tactical game and heavy scoring are attributes which make him the toughest match-player in the sport. As Stephen Hendry put it: “Selby is like a snooker vampire. He sucks all the life and adrenaline out of you. He’s just the most unbelievable competitor I’ve ever seen.” 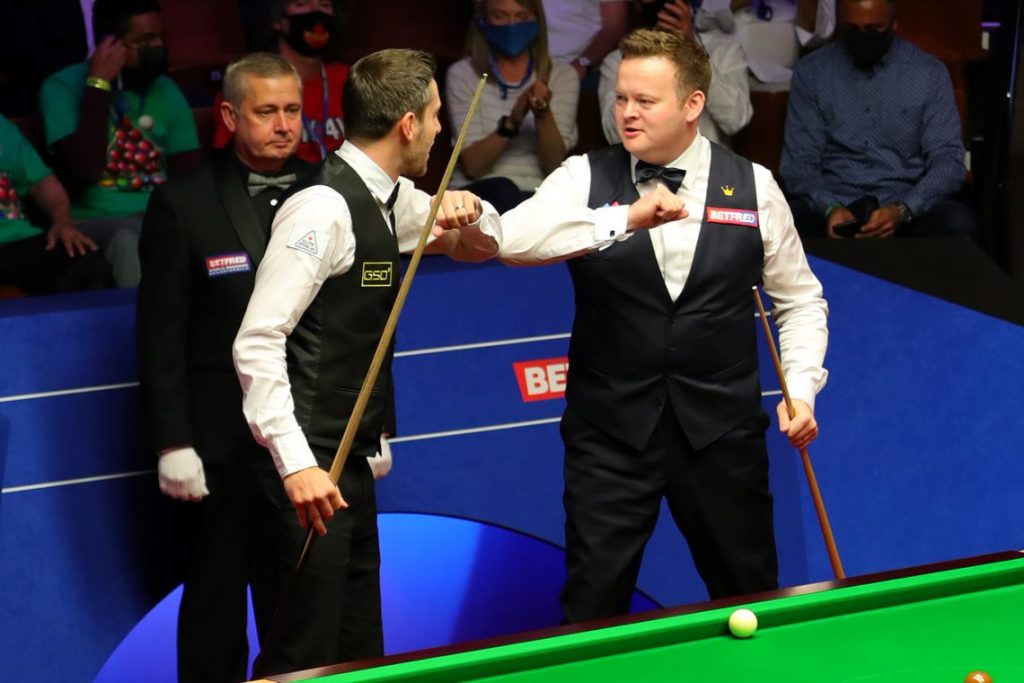 Leicester’s Selby suffered a crisis of confidence in 2019 when he went over a year without a title. He questioned his own technique and lost his habit of producing his best at the business end of close matches. Coach and psychologist Chris Henry takes plenty of credit for restoring Selby’s self-belief. Even a 17-16 defeat against O’Sullivan in the semi-finals last year was processed quickly as Selby won the first ranking event of the new season – the European Masters – then thumped O’Sullivan 9-3 in the final of the Scottish Open in December. Without question, he is back to his best.

Selby becomes the eighth player to win 20 ranking titles and has now won 11 of his last 12 ranking finals; his only defeat coming at the one-frame Shoot Out earlier this season. With three Masters and two UK Championship titles to his name, he has now won nine Triple Crown events, bringing him level with Higgins and behind only O’Sullivan (20), Hendry (18) and Davis (15). Age 37, he may well have another decade at the top level in which to chase snooker’s biggest records.

Climbing from fourth to second in the world rankings, Selby has narrowed the gap on leader Judd Trump to just £124,000, and has set a target next season of regaining the top spot he last held in March 2019.

Murphy, the 2005 champion, had hoped to become only the seventh player to win multiple titles at the Crucible, and he would have set a new record for the longest gap between his first and second. The 38-year-old has now lost his last three world finals, having finished runner-up to Higgins in 2009 and Stuart Bingham in 2015. 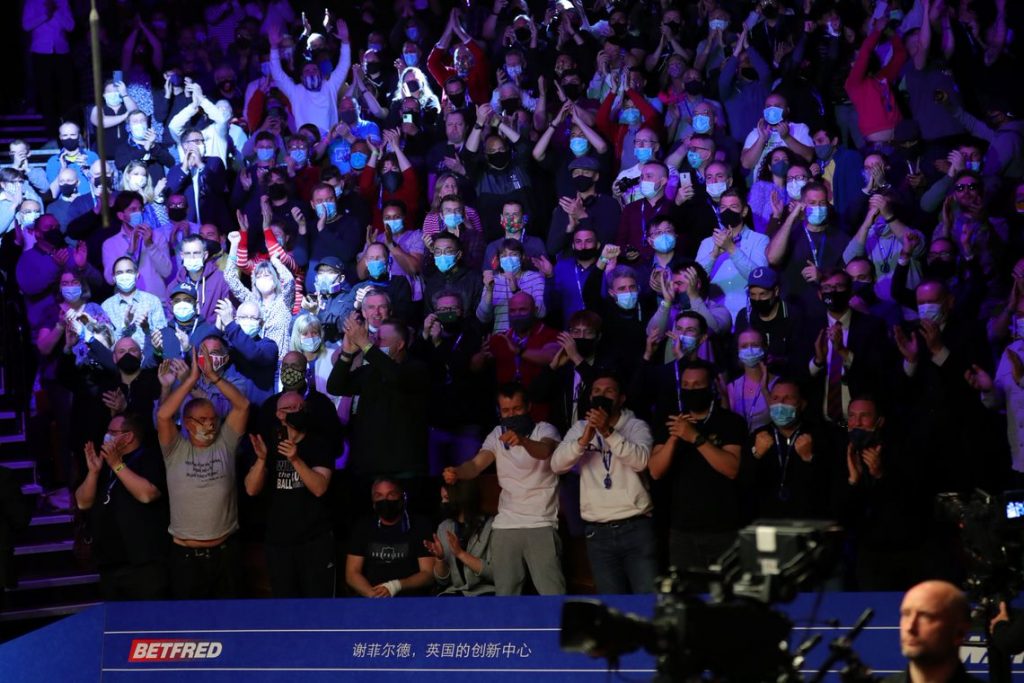 A packed crowd was welcomed for the final, as the tournament was part of the Government’s Events Research Programme

Having knocked out Judd Trump and Kyren Wilson, Murphy came into the final full of swagger, and made a promising start, leading 5-3 after the first session. But he looked jaded on Sunday night as Selby won six out of seven frames to lead 10-7, and Murphy was never able to narrow the gap to less than two frames.

The £200,000 runner-up prize is a huge consolation for Murphy and rescues a season in which he had previously reached just one ranking semi-final, and that cheque moves him up from seventh to fifth in the world. The Dublin-based cueman also banks the £15,000 high break prize for a 144 which was the best of 108 centuries made during the tournament, smashing the previous record of 100.

For the first time at a British sporting event for over a year, a full-capacity crowd filled the arena at the Crucible, as snooker helped lead the way towards the return of all forms of indoor entertainment. The atmosphere for Monday’s afternoon’s introduction was sensational. As the evening session got underway, Murphy was handed the warmer reception, as fans hoped to see him battle back from a 14-11 deficit.

Leading 28-4 in the first frame of the concluding session, Murphy missed the pink to a centre pocket with the balls at his mercy. Selby punished him with a 66 clearance to lead 15-11. The Jester looked set to pull further ahead until he missed a red to a top corner on 44 in frame 27. Murphy replied with 30 then got another chance and made a tremendous 43 clearance, pumping his fist as he boosted his hopes of a fight-back.

But a safety error from Murphy early in frame 28 handed Selby the chance to make 40. He played safe then earned another chance and added 68 to go 16-12 ahead. After a scrappy opening to the 29th, Selby played a loose safety and Murphy’s 58 was enough to draw him within three frames at the interval.

A tactical exchange early in frame 30 was resolved when Selby slotted a red into a centre pocket, and he went on to make a 120 total clearance to move to the brink of victory at 17-13. Murphy pulled two back in quick succession with breaks of 100 and 110. 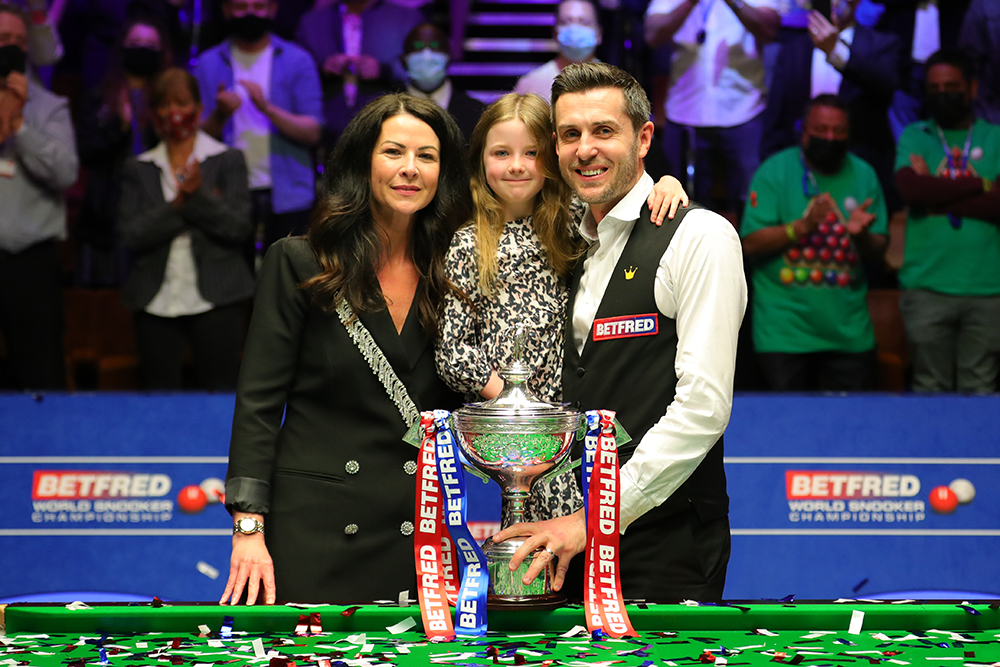 In frame 33, Selby made 38 before missing a difficult red to a baulk corner. Murphy replied with 22 then had another chance and made 35 before facing a tough pot on the last red along a side cushion, playing with the long rest. Others might have played safe, but Murphy only had eyes on the clearance. The red wobbled in the jaws, and stayed out. That was his last shot as Selby composed himself and cleared the table.

“It’s unbelievable to win it for a fourth time,” said Selby. “It’s such a tough tournament. To beat O’Sullivan to win my first title in 2014 was a dream come true. To win it tonight with my daughter Sofia there, now she is old enough to understand what’s happening, is on a par. Shaun played fantastic, he is a great player and great ambassador.

“A few years ago I had some really dark days, times were tough. All my family and people who are close to me will understand what I am going through now. This is a special one.

“When I came here last year I wasn’t too confident, and Chris Henry got me within one frame of the final. And by working with him this year I have seen an massive change in terms of my self-belief because I was fragile before. It is such a tough sport mentally and you can’t win this event if you doubt yourself.

“My aim now is to get back to world number one, but that will be tough because Judd Trump has been winning so much for the past two years.”

Murphy said: “Mark is super granite. I have known him since we were nine years of age and he has always been the same. I started the match well and he went into super-hard mode. He broke me last night and it was tough to give him a three frame lead, in the end that’s what made the difference. When I made two centuries to go 17-15 I thought I was in with a chance, but it wasn’t to be. 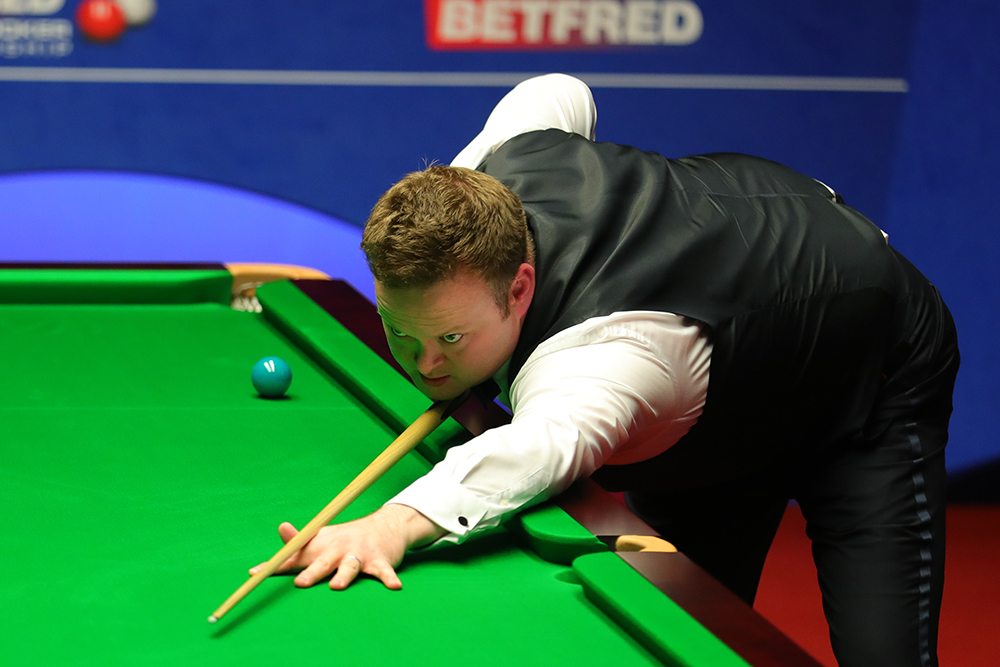 “Life has been very difficult for everyone in the last 12 months. I want to say a very deep personal thank you to everyone who has bought a ticket and come here over the last 17 days. Sport is nothing without the fans and we have been so delighted to have everyone back for the past fortnight. I am gutted to lose but thrilled to have been part of a great match.

“Playing Mark is like a forensic exam, he tests every aspect of your game. He has to be looked at as the best all-rounder we have ever seen. His long potting, scoring and tactical play are all extremely good and he has patience in abundance.

“I have shown to myself that my best game is still pretty good. Maybe my best snooker could still be ahead of me.”