Mark Selby praised the tremendous reception he received from the Crucible crowd as he began the defence of his Betfred World Championship title with a 10-7 defeat of Jamie Jones. 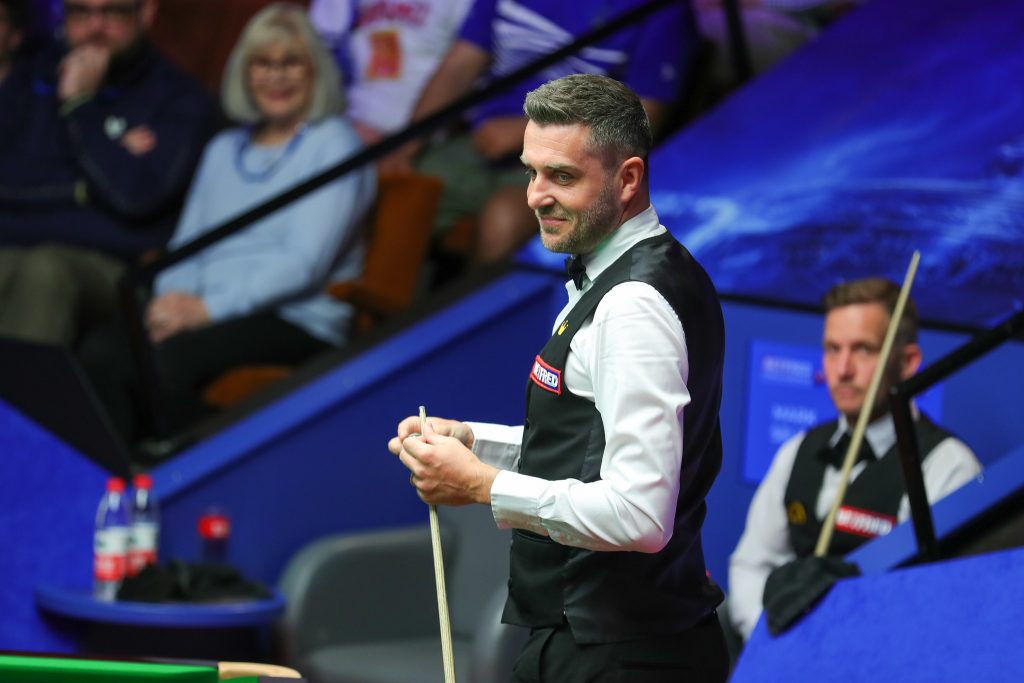 Selby is playing at the Crucible for the 18th consecutive year

Selby made three centuries in an impressive performance as he took the first step towards his goal of a fifth Crucible crown since 2014. He was briefly under pressure when Jones recovered from 8-3 to 8-6, but passed the test to add the two frames he needed, setting up a last 16 meeting with Yan Bingtao or Chris Wakelin.

Leicester’s Selby continues to have treatment for the mental health struggles he revealed earlier this year, but on the baize the 38-year-old looked focussed on the challenge as he avoided a potential opening day banana skin against a dangerous opponent in Jones. This was his first competitive outing since the Welsh Open six weeks ago, and he was welcomed back into the limelight by the fans in Sheffield.

“It was quite emotional walking out there today,” said Selby. “The reception was great, I suppose partly because I am defending champion and partly because I have been honest about what I am going through. People can relate to it. Everyone on social media has also been really supportive.

“The result was irrelevant for me today because it was all about going out there and enjoying it. At one point I wasn’t sure whether I was going to play in this event, so even if I had lost I would not have been disappointed. I have had matches this season, like in the Masters, where I stopped enjoying the game. I still love the game but mentally I was not in a good place. Today was a lot better.”

Trailing 6-3 after the first session, Jones had a chance to clear from 55-0 down in the opening frame tonight, but in potting the final green he sent the cue-ball into a centre pocket. That handed Selby the chance to extend his lead, and he also took frame 11 by getting the better of a safety battle on the last red for 8-3.

The 12th came down to a long tactical exchange on the final black, and Jones slotted it home from mid-range to start his fight-back. A run of 53 helped him make it 8-5 and when Selby missed a simple pink to a centre pocket on 48 in frame 14, he looked vulnerable as Jones closed within two frames. 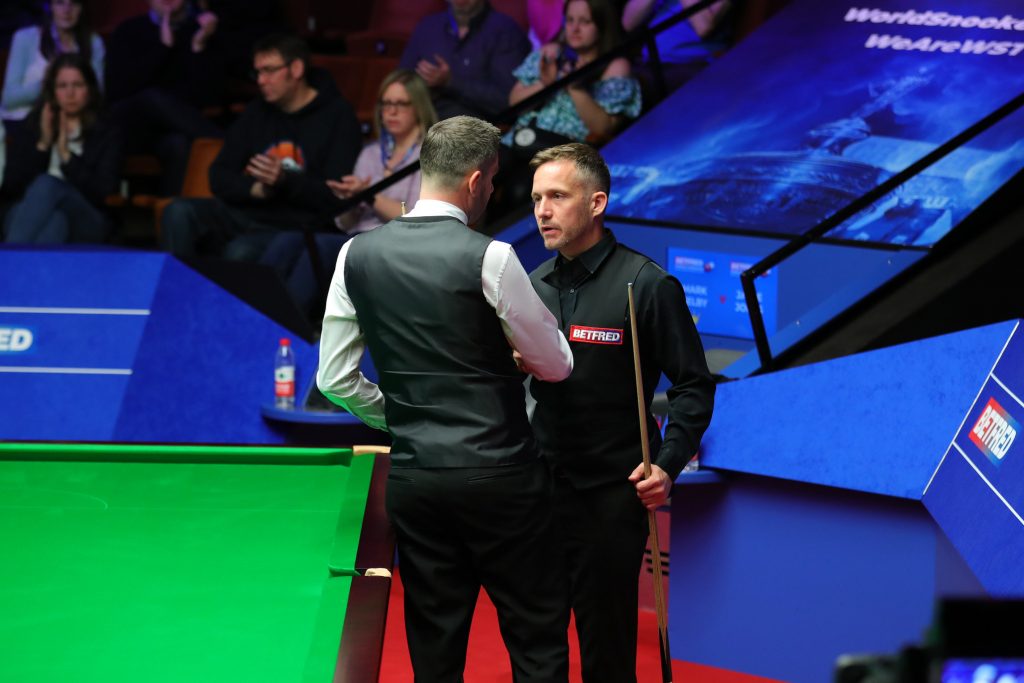 But world number two Selby weathered the storm, making a fabulous 137 total clearance to lead 9-6. Jones pulled one back and had chances in frame 17, but Selby outmaneuvered   him on the final red and cleared to cross the winning line.

Selby added: “I have so much respect for Jamie, I think he’s a great player. He is showing everyone just how good he is. It was a tough game and I’m happy to get through.

“I’ll be going back home for a few days, spending some time with the family. When I come back, I’ll try and enjoy it again but whatever happens I’ll accept. I’ll be out there trying my hardest as I always do.”

Jones said: “I couldn’t keep control of the white, around the black spot. There’s a lot of pressure out there and you need to make things simple, but I couldn’t do that. I showed a lot of heart and I’m proud to have stuck in there with the World Champion. I could have rolled over at 8-3 but I never give up.” 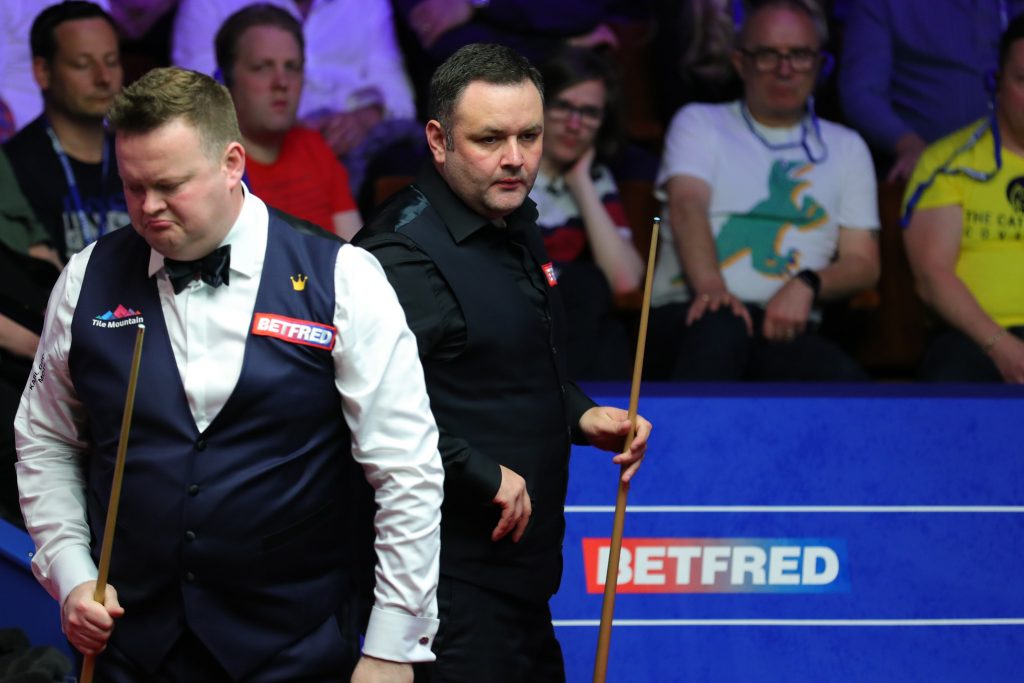 On the other table, Stephen Maguire opened up a 6-3 lead over last year’s runner-up Shaun Murphy. The pair have been battling it out on the circuit for 21 years, since their first meeting back in 2001. However, this is the first time they have ever met at the Crucible. Murphy leads the head-to-head standings 12-10.

Maguire claimed the opening frame, before a break of 53 helped 2005 World Champion Murphy restore parity at 1-1. Scotland’s Maguire edged ahead once more with a run of 65, before Englishman Murphy again pegged him back to 2-2.

Maguire rapped the table in frustration after missing a red during a scrappy 37-minute fifth frame, but he eventually stole it on the black to lead 3-2. The former UK Champion then edged two clear for the first time, crafting a run of 67 to come from 51 points behind and win the sixth on the pink.

Maguire added the next two frames to make it four on the bounce and lead 6-2. Murphy won the final frame of the evening, compiling a break of 79, but will still require seven of the last ten when they return on Sunday at 7pm.