Mark Selby wrapped up a 13-7 quarter-final win over Neil Robertson at the Betfred World Championship to move within two matches of a fourth Crucible crown.

The meeting of two former champions didn’t feature a single century break, but Selby produced a safety masterclass as he battled his way into the semi-finals for the first time since 2017. World number seven Selby will now face Mark Williams or Ronnie O’Sullivan on Wednesday, Thursday and Friday. If he goes all the way to the trophy, the 37-year-old will join John Higgins on four Crucible titles.

Selby has recently started working with psychologist Chris Henry and is playing with renewed self-belief. Australia’s Robertson, by contrast, looked short of inspiration and his sequence of not reaching the final since his 2010 triumph goes on. He made just four breaks over 50 in the 20 frames.

Leicester’s Selby led 11-5 overnight and took the first frame today with a break of 91. Robertson came from 56-1 down to pinch the next, helped by a fluke on the penultimate red. Frame 19 came down to the colours and Robertson potted blue and pink to raise his hopes of a fight back at 12-7.

World number two Robertson was on a break of 53 in frame 20 when he missed the black off its spot. Selby made 14 then trapped his opponent in a tough snooker on the last red, and from the chance that followed he cleared with 33 to become the first man into the semi-finals.

“In the first two sessions I was near faultless in terms of my safety and my all round game,” said Selby after reaching the last four at the Crucible for the sixth time. “I was close to my best in that part of the game. I didn’t give Neil many chances. I can’t wait for the semis now, it seems a long time ago that I was last there.” 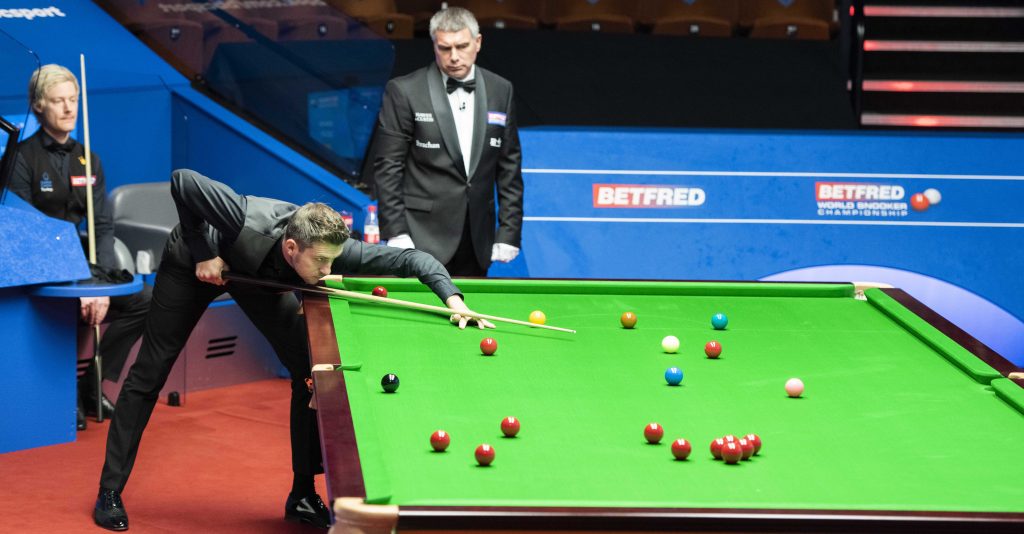 Asked about his decision to work with Henry,  Selby added: “I went through a spell of doubting myself because I was not winning tournaments. Before that I had got used to winning, and when I stopped I realised how hard the game can be. I knew my mindset was negative so I felt I needed to work with someone to deal with that. I have only been working with Chris for a month but it seems to be working.”

Robertson said: “Mark’s defensive safety was absolutely unbelievable. He didn’t let up and didn’t open up any of the frames. He got his gameplan absolutely spot on and kept it super tight. I just couldn’t get any free flowing scoring going at all. The balls were very scrappy.

“That was one of the best safety performances I’ve ever put in, but playing Mark I probably should have spotted the danger signs a little bit earlier and maybe opened things up more.

“You have to try and work out how not to be broken down. In football, when a team puts ten men behind the ball and camps in their box, you need to find answers for that. I probably played 35 frame winning safety shots against Mark and Barry (Hawkins) and both of them kept finding escapes and playing unbelievable safety shots in return.”