The Craft Of Commentary 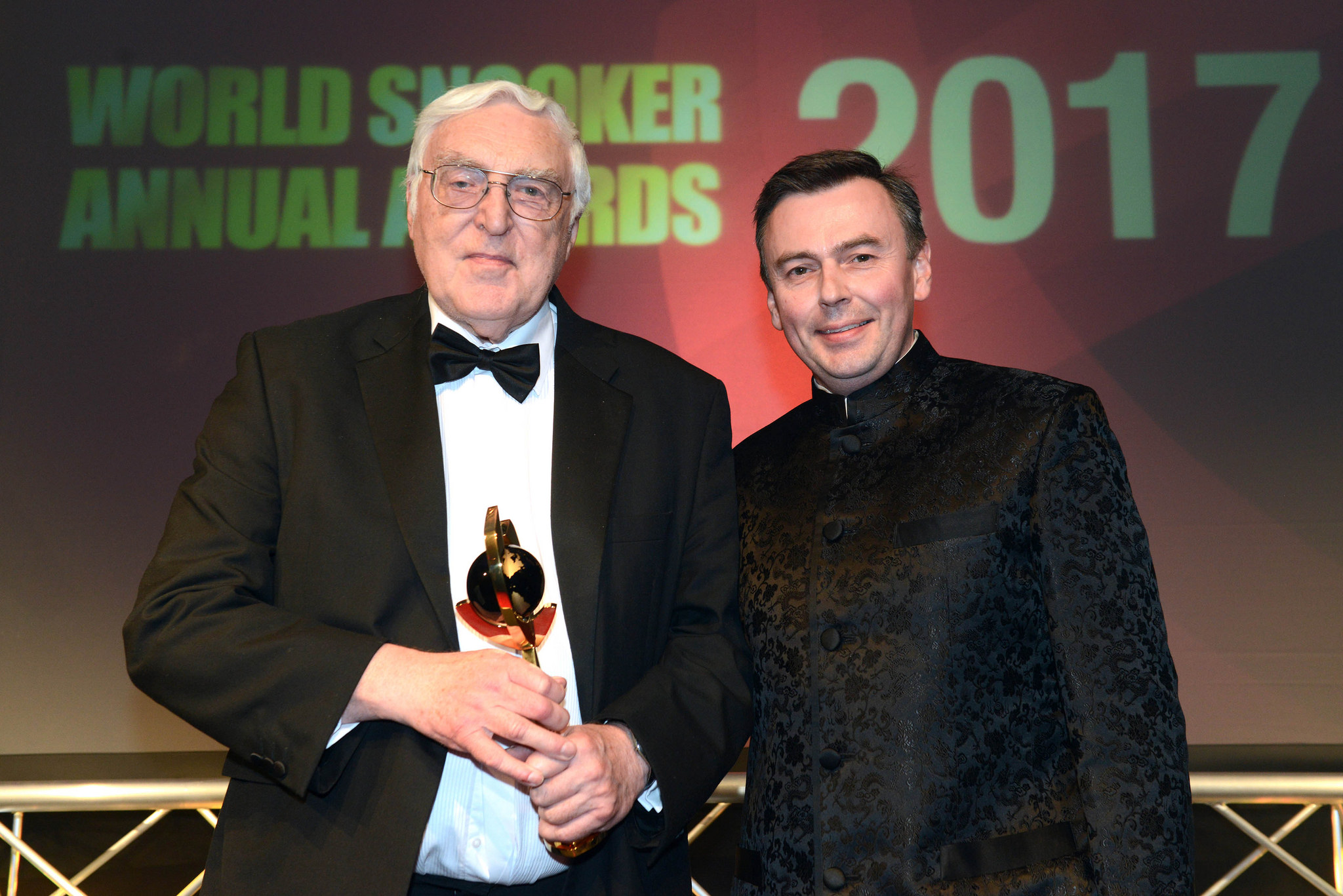 Legendary commentator Clive Everton was inducted into snooker’s hall of fame in 2017.

There are occasions in snooker and sporting history which leave an indelible mark on our minds. We are often guided through these iconic moments by eminently distinctive voices. The daunting role of providing these voices lies with the commentators…

Snooker’s now global prominence means that, along with a passionate core fanbase, there are an increasing number of viewers who are new to the sport. The role of the commentator is to inform and enhance the experience for both of these groups.

Certain commentators have gained legendary status within their chosen sports. The late Sid Waddell has the Darts World Championship trophy named in his honour, Murray Walker is known as the voice of Formula 1 and John Motson is synonymous with football’s Match of the Day.

The original voice of snooker was ‘Whispering’ Ted Lowe, known for his hushed tone and calm commentary style. Lowe sadly passed away in 2011, but his way of operating has influenced many of those who have followed him into the commentary box.

Lowe was behind the mic for snooker’s most famous match, the 1985 World Championship final. His simple utterance of the word ‘no’ when Steve Davis missed the final black in the decider, to hand Dennis Taylor the title, has reverberated throughout the sport’s history.

Current BBC commentator John Virgo has secured a reputation as one of snooker’s best. He admits that he tries to emulate Lowe by building the tension as a match ebbs and flows towards a climactic finish.

“I’ve got to be honest, Ted Lowe is the one who inspired me,” said 1979 UK Champion Virgo. “He was called ‘Whispering’ Ted because when he used to commentate on the Joe Davis matches at Leicester Square Hall, there was no sound proof commentary booth. He used to have to sit in there and keep his voice down, otherwise he would be heard. He set the tone for commentators on snooker.

“Snooker has its own niche. It isn’t like a football match and it isn’t like darts with all the noise going on. It has that hushed theatre-like feel to it. Theatre and drama are the imperative words for me. It reaches excitement levels which matches are constantly building towards. You want to portray that type of event rather than all the noise associated with other sports. Snooker crowds are selective in their responses and that builds a unique atmosphere. The Crucible Theatre epitomises that.”

In modern snooker it is rare that commentary is a one-person job. There are different ways in which the viewer needs to receive information. As a spectator the experience can be enhanced by both statistical context and expert opinion. The responsibility of providing the former lies with the lead commentator.

In the 1990s experienced snooker journalist and broadcaster Clive Everton picked up the mantel as the sport’s top lead commentator. He has been in the box for a number of snooker’s biggest matches, including Stephen Hendry’s record breaking seventh World Championship final win against Mark Williams in 1999.

One of Everton’s former protégés was David Hendon, Eurosport’s current head commentator. Hendon developed a vast knowledge of the sport through several years spent as a Press Officer for the WPBSA and then as a journalist. He still writes for Everton’s monthly magazine Snooker Scene.

Hendon, who away from snooker is also a playwright, believes that painting a narrative of the action enhances the experience for the viewer.

Hendon said: “It is about providing a context and a flow of information. People write it off as stats, but it is information. So long as you raise things at the right time it can help to create that storyline. For example, if a player is three up with four to play, it may be the case that they were in the same position three tournaments earlier and lost. If you can provide the right information to the viewer it may give an insight into how the player may be feeling and how the match may go.”

As well as helping onlookers digest the action in front of them, lead commentators must also be adept at guiding the television production between segments during play. They will have constant instructions from the production gallery coming through their headphones, telling them how long they have to speak, when an advert break will occur and when live coverage will resume.

“The thing to do is not panic,” Hendon added. “You Just need to speak clearly and learn to listen and talk at the same time. It is something you get used to I think. It is important to listen out for instructions, as plans can change very quickly. I did a Gibraltar Open match with Neal Foulds and just as we were about to sign off the producer told me that Judd Trump’s match would be taking place in 20 minutes and we would be doing it. We need to be aware of these things.

“The job in commentary is talking, you have to speak so there is no hiding. So much of it is about preparation and you can’t just simply walk in. The commentators in the lead role do a lot of research. I am the statistician for all of the TV companies anyway, so I prepare all of the player profiles. That goes in slightly through osmosis, so that definitely helps.” 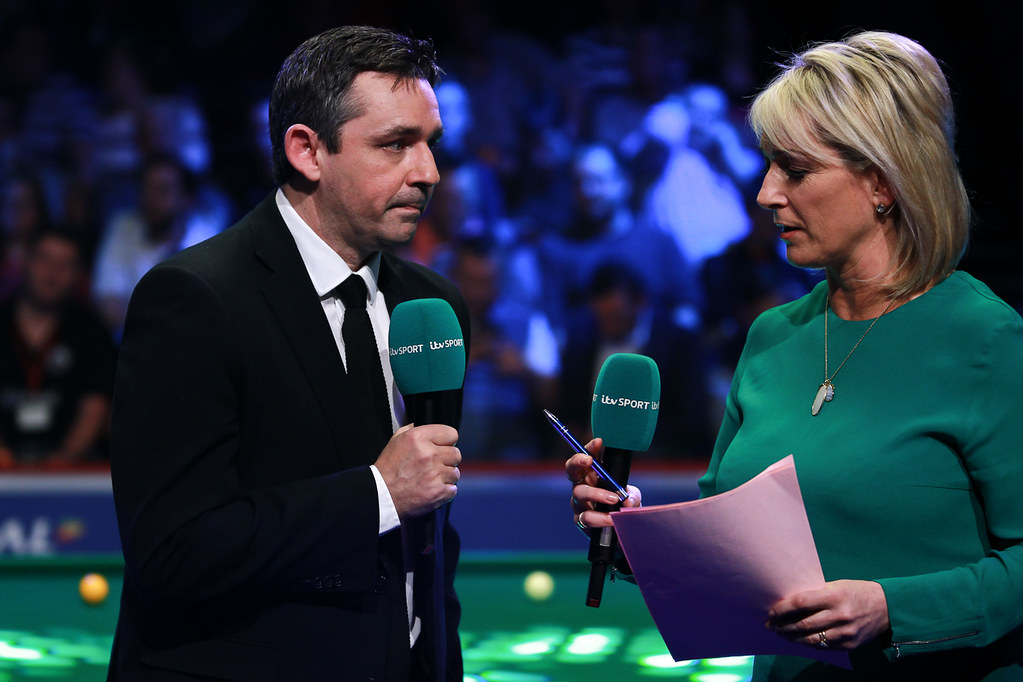 The role of the analyst, or colour commentator, is usually given to ex or current professionals. Scotland’s 1994 Masters champion Alan McManus has garnered widespread acclaim for his enthusiastic and insightful style. McManus is well known for divulging his opinion on the psyche of the competitors and giving his thoughts on their approach during the game.

McManus said: “When I first started I would make simplistic statements like, he’s potted that blue and now the red at the bottom of the pack goes. Everyone can see that, you don’t need to say it. You have to try to think about the viewer as much as you can. That is difficult when you are just in a small box with one other guy. You have to get your head round the fact that whatever you say is going out to half a million people or more. You need to accept that and think about what to tell them. I tend to watch the guys not so much when they are playing a shot, but when they are in their chair, and analyse their demeanour. I think you can get a clue to how they are feeling.

“I’m a snooker fan. I get genuinely excited. Sometimes I must admit that the pressure you feel as a player inside your tummy, I can feel that in the commentary box. I get really nervous for the guy that is playing the shot. John Virgo is similar in that regard and we have done matches together at the Crucible where we were both jumping around the commentary box and getting quite emotional. It is very easy to over-speak. The best tip you can get is to put the mic down when you aren’t talking. It sounds simplistic, but you then need to have something worth saying before you turn it back on again.

“I actually really enjoy preparing for it. I’ll almost always go into the press room early before a match and jot down a few things. When I look at some of the lead commentators, like David Hendon, Phil Yates and Clive Everton, their preparation is superb. Commentating with Clive was great, I really looked forward to his opening gambit. When the handshake was done and the players were about to break off, I would always wonder what he was going to say. I would try to predict what he was going to come out with and I would never get it right. He comes out with some brilliant statements.”