The Son Always Shines On TV 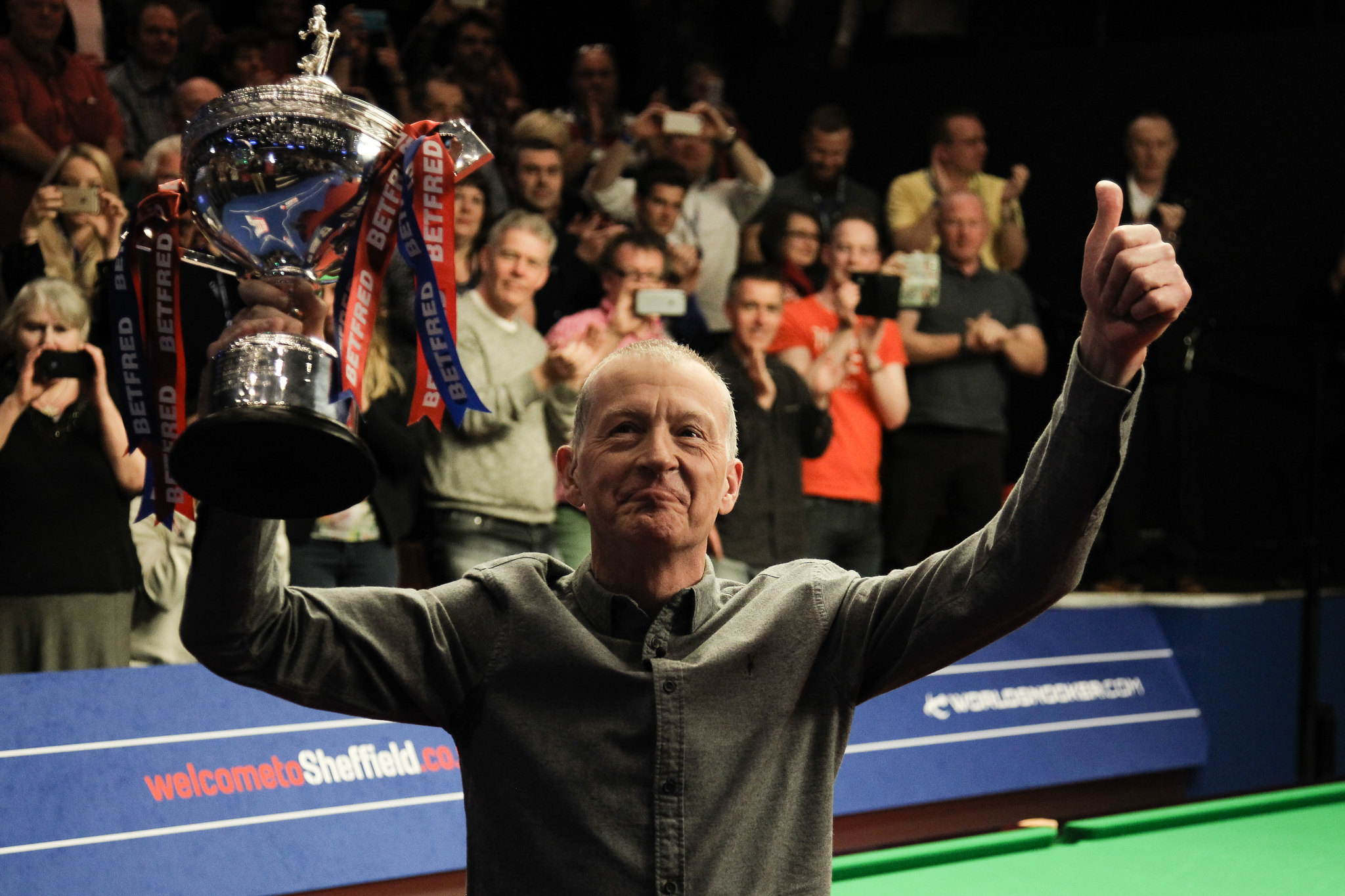 Steve Davis parades the World Championship trophy after retiring in 2016.

For many players, their father is the one who introduces them to the game, either through playing or watching on television, and then fulfils many roles through their career: taxi driver, financer, ball-picker, psychologist and shoulder to cry on.

Even the great Steve Davis, with six world titles and 40 years of experience behind him, relied heavily on his father Bill until the very end of his career. Not long after Bill sadly passed away in 2016, Steve decided to retire.

As he bowed out at the Crucible he reflected on his last match in the qualifying rounds: “My father wasn’t well so I entered the World Championship for him this year. He was still alive when I entered, then he passed away. I played the match and it was only one I ever played without him.”

The early years of a career, forging a path through the junior and amateurs ranks, inevitably requires a huge commitment from the parents.

Anthony McGill’s father Tam was a long distance lorry driver (as was Judd Trump’s dad Steve) and the Scot recalls the sacrifice he made.

“He would do a 12 to 14 hour shift through the night on Fridays and get home at 5am,” said McGill. “He’d have a shower and breakfast then wake me up at 6am and we’d get on the road. He’d drive all the way down from Glasgow to Leicester, then he’d sleep in the car while I was playing snooker, then we’d drive home again. The best junior events were in England so that’s where we had to go.” 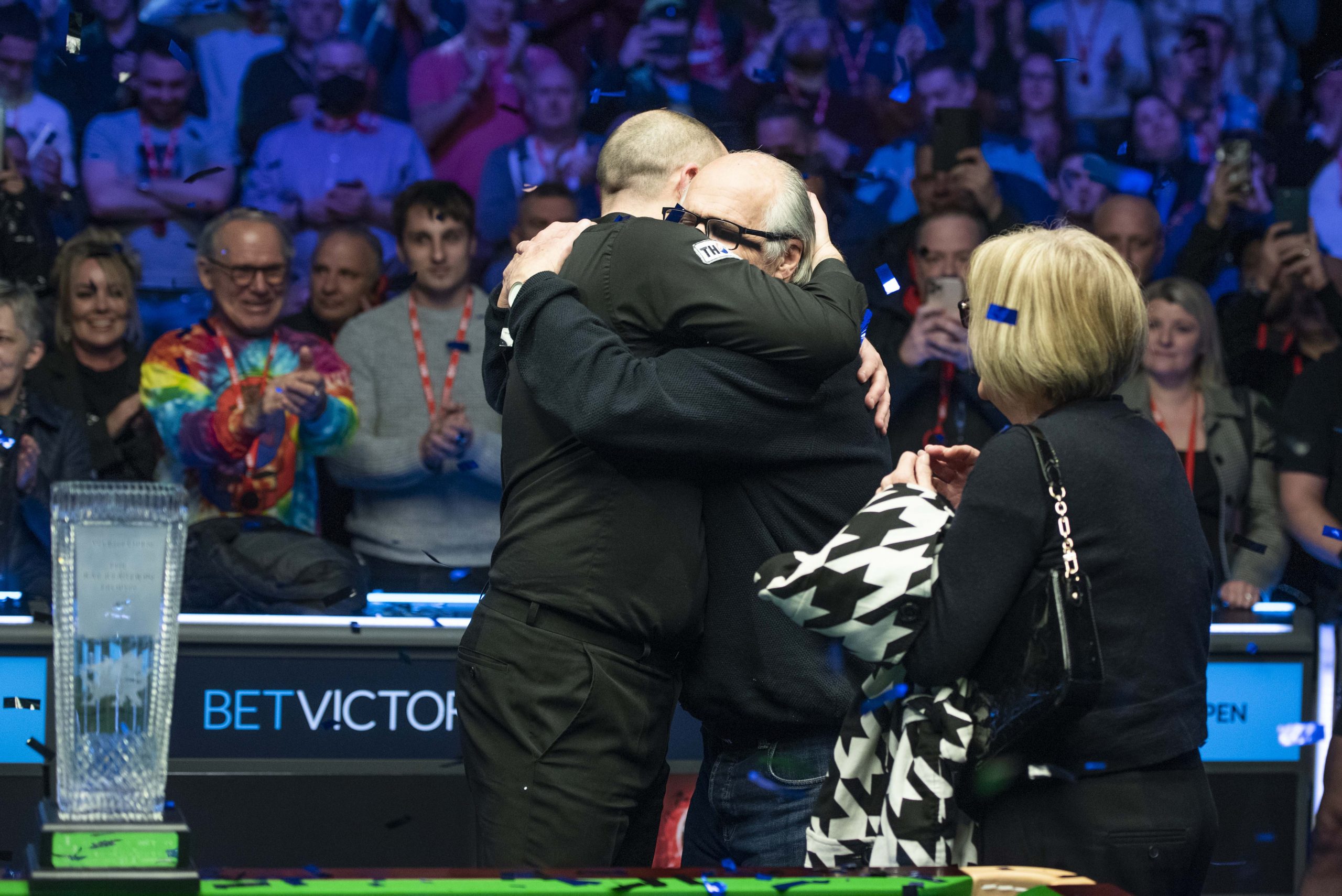 Joe Perry has a similar story as he remembers turning pro as a teenager, and sharing a flat with his dad Peter in Blackpool, where the qualifying events were staged, for six weeks every summer.

“He was a self-employed taxi driver so he would go that whole time without earning any money, and pay for the flat we rented,” said Perry. “And I was hardly earning anything in prize money those days. So it was a big commitment for him, financially. He never advised about snooker because he’s got no expertise in the game itself. But he taught me so much about real life.”

Weight of expectation can often put too much pressure on a young player’s shoulders, and Perry found that the fledgling can fly more freely once it escapes the nest.

“I think a lot of players’ parents want them to win, more than the players themselves,” he said. “As a player you get used to losing because it happens a lot! I had a big moment in my late 20s when I started working with Terry Griffiths. I spoke to him about my routine around tournaments, and the fact that my dad was the first person I would ring after I’d lost, to go through the whole match with him.

“Terry described that as ‘mental quicksand’ – he felt I was reliving the torture of defeat. He wrote a letter to my dad and said he felt I would be better having more independence. That turned out to be a big release for me. Afterwards I felt as if I was only playing for myself and not for my parents – not that they ever put pressure on me. I felt more freedom and I was less worried about results.”

The many years of commitment from his parents made Perry’s Welsh Open victory early this season extra special. It was his first tournament success on UK soil and he was embraced after the final by Peter and mum Judy.

“They have always been proud of me, but that moment was the absolute icing on the cake,” Perry recalls.

When a ‘snooker dad’ discovers he has a prodigy on his hands, there is a crucial balance to be found between dedication, and keeping expectations under control.

“Of course I dreamed of what it might lead to,” said Carlo Brecel as he reflected on his son Luca’s junior days, when he won the European under-19 title at the age of just 14. “It was exciting, for me as well as Luca. When you see your child doing well at something and having fun, it’s very rewarding. He was very happy. There was no great pressure on him, that is important.

“I saw fathers who were angry with their son or daughter after a loss. I said to Luca, it’s no problem my friend, next week there is another chance. 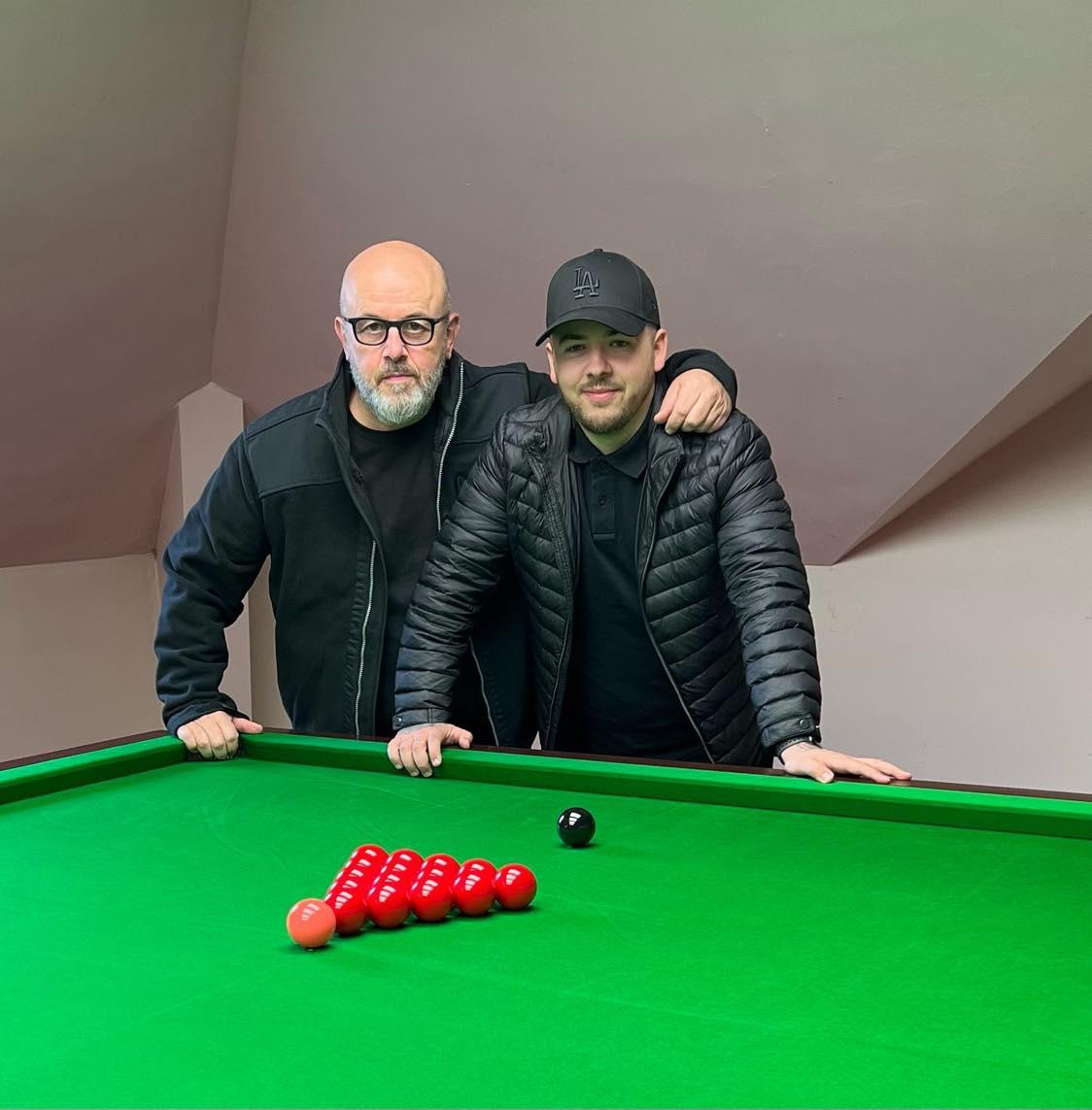 “As a family we had to sacrifice a lot of course.  But I certainly don’t regret any of this. We invested a lot of money in him so that he could play in the best conditions. I did this because I always believed in him and will continue to do so as long as I live. If you have a child who has a talent, you support him completely.

“These days of course he is independent, he often travels to events without me, he has a manager. But I am still there behind the curtains. There are some problems that can’t be solved by a manager, and he comes to mum and dad first, which is how I want it to be.”

Last November and December, Luca’s mother Mirella was seriously ill in hospital with Covid. But so protective are his parents of Luca’s career, they decided not to tell him. “That was hard,” said Carlo. “But at the time he was getting to the final of the UK Championship and then doing well in the Scottish Open so we didn’t want him to worry. And when he ended up winning the Scottish it was so emotional for all of us.”

One thing all fathers seem to have in common is that they get more nervous watching than the player at the table.

“If I am watching on TV or just following the game on live scoring, everyone has to leave me alone,” jokes Carlo.

When it comes to the father-son relationship in the snooker-sphere, Peter Lines has a unique perspective, as he was influenced by his own dad and now does his best to guide his son Oliver.

“My dad was a bus driver and on the weekends he worked in a club for the other drivers. That’s where I first played, I would go with him on Saturdays and have a game of snooker,” said Peter.

“Oliver started playing when he was around ten. I split up with his mum and he was living with me, and he would come to the club so he could play snooker and spend more time with me. He took to it very fast and won the English under-14s when he was 13.

“Hopefully it has helped him to have me in his corner, because I know how hard the game is, and things don’t always work out the way you want. At every tournament there are 128 players and only one can win it. The best amateurs get used to winning a lot of matches, then suddenly on the pro tour you are winning very few, it’s tough to get your head around that.

“I try to make things as easy as I can for him, like sorting out his practice times so he can just concentrate on playing. I never tell him off for playing the wrong shot.

“Watching is definitely harder – or following the live scores when I am refreshing every five seconds! I remember Q School in 2020 when Oliver was playing until the middle of the night and I was at home, sitting in the dark, just waiting for the phone to ring to find out whether he had made it. Those are the things you go through.

“But I have always loved the game, my life revolves around it. And Oliver loves playing as much as me, I have never had to tell him to go and practise. He just wants to come home one day with a trophy.”

At junior level, it is important that fathers find the right balance between encouraging their children, but giving them space to enjoy snooker without pressure. 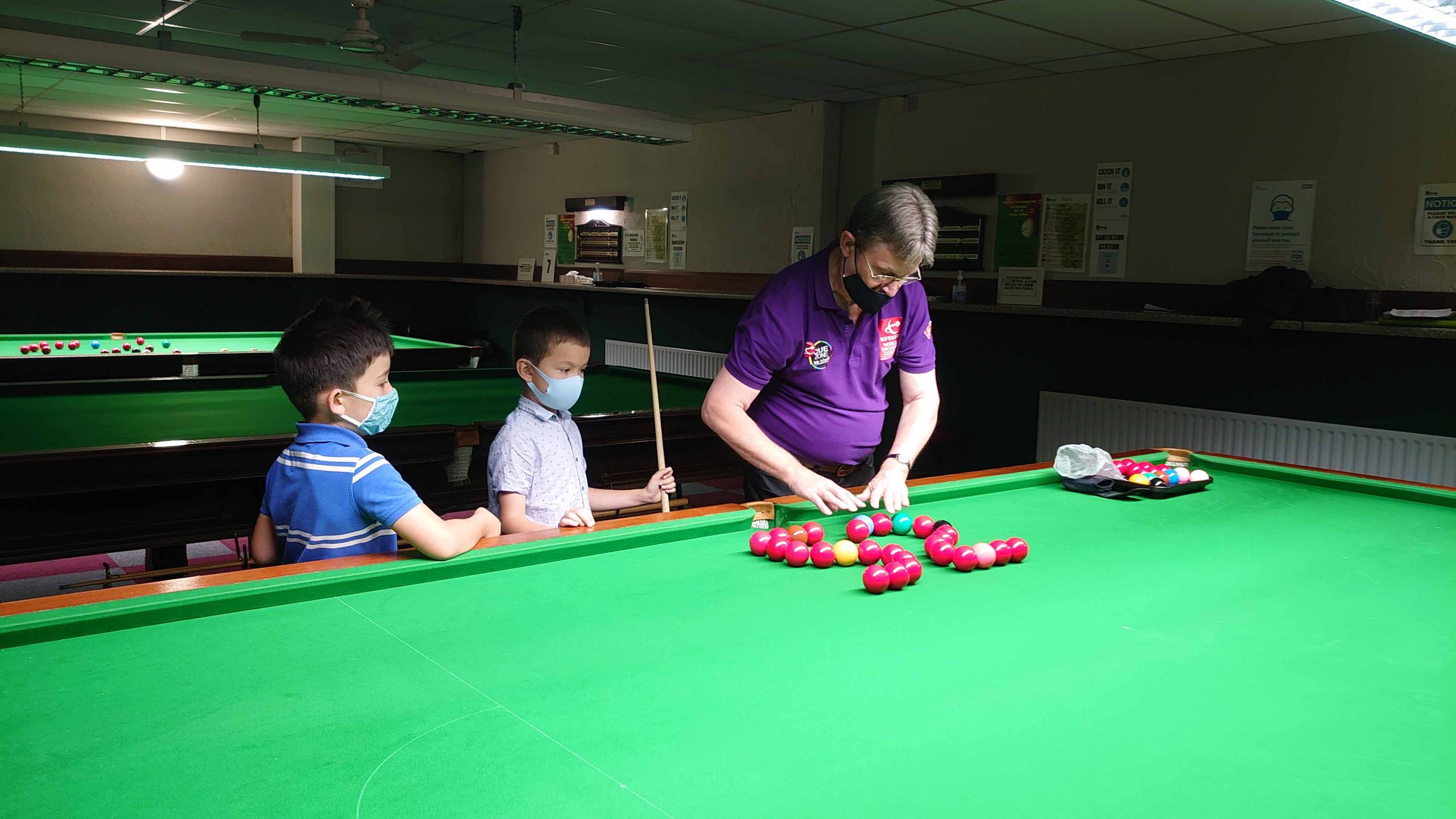 Tim Dunkley, a leading coach in Hampshire which is currently one of the leading regions for producing young talent, has had plenty of experience of handing snooker dads on the junior scene. “It is hard for them and they go through the whole range of emotions,” he said. “Some of them are so desperate for their kids to do well and they get too involved. I tell them to take a step back and do what they are good at, which is driving a car and having the time and money to support the juniors.

“When a kid loses a match, he doesn’t need his dad there telling him he’s rubbish or he played the wrong shot. I have even seen fathers trying to get involved in the scores being put up on the scoreboards. We have had to put a stop to that in our Cue Stars events and we have a rule that dads have to sit at least two tables away from their children.

“It’s not that they are seeing the chance of fame and fortune on the pro tour because that’s such a long way off, it’s more about their kids moving up from regional to national level. What they have to accept is that a boy of seven or eight years old is more than capable of managing himself in a snooker match and keeping score. The matches should be between the two boys, not the two dads! They are not all like that of course, there are a lot of fathers who realise the most important thing is for the children to enjoy it.”

So here’s a shout out to all of the snooker dads out there and the millions of miles they have driven, hours they have spent and pounds they have invested on the next generation. Just remember – snooker is supposed to be fun!