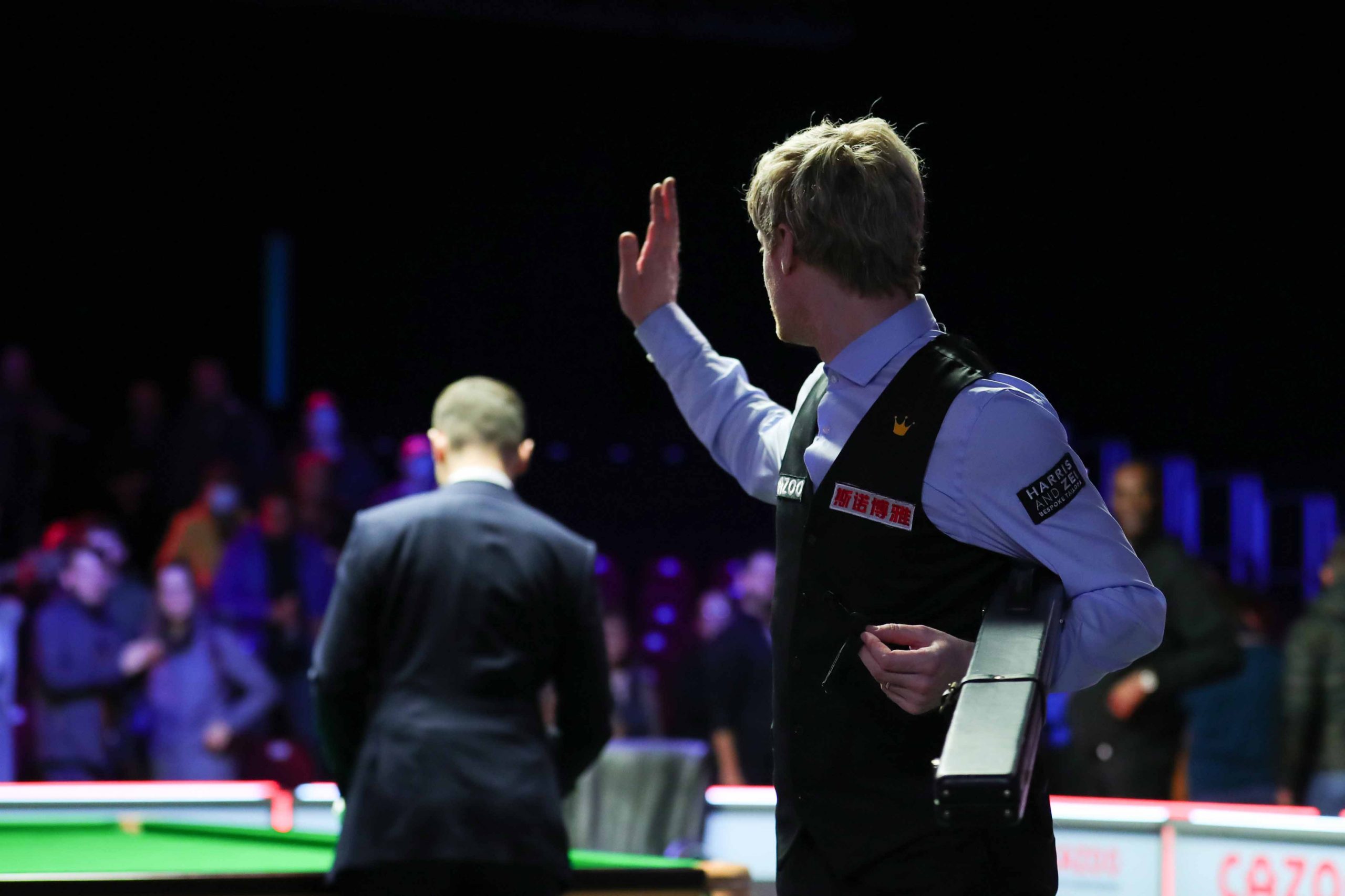 Today’s encounter was a repeat of last year’s final, where Australia’s Robertson triumphed by a 10-4 scoreline. This evening’s climax was considerably closer.

Robertson and O’Sullivan have clashed in four high profile encounters so far this term. Robertson has now come out on top on three occasions, also scoring wins at the Cazoo Masters and the Cazoo Players Championship. Although O’Sullivan did defeat Robertson in the final of the Cazoo World Grand Prix before Christmas.

Robertson went on to win the title at the Players Championship and as a result he has now secured the Cazoo Series trophy, regardless of the result in Sunday’s final. The Melbourne cueman will face either John Higgins or Luca Brecel in the title match over the best of 19 frames.

Despite suffering defeat, O’Sullivan created his own piece of history this evening. He is the first player ever to make five centuries in two consecutive matches. The Rocket also fired in five hundred breaks during his 10-9 first round win over Mark Williams.

The pair came into this evening locked together at 4-4 following a pulsating afternoon session.

It was O’Sullivan who took the opener tonight, before 2010 World Champion Robertson claimed two on the bounce to lead for the first time since frame one at 6-5. He then headed into the mid-session two to the good, thanks to a break of 66 to make it 7-5.

O’Sullivan took the first frame after the interval, before the pair went into break building overdrive. A century run of 117 moved Robertson 8-6 up. However, O’Sullivan responded in turn with a run of exactly 100.

The 16th frame saw O’Sullivan leave his counterpart requiring a snooker after a break of 70. Robertson got one on the final red, but spurned a mid-range pink to allow 38-time ranking event winner O’Sullivan to draw level at 8-8.

A break of 112 saw O’Sullivan move to the verge of victory, but Robertson held his nerve to take the 18th frame and force a decider. He fired in a fearless run of 80, including a do or die red along the top cushion, to earn his place in the final

“It’s a huge win. I thought it was a brilliant match. You won’t see better quality from two players than the first session today,” said 40-year-old Robertson.

“He made some unbelievable breaks tonight out of absolutely nothing. Most players would dream of making 30 in those situations and he was making centuries. You have to enjoy it while you are in the chair but also not accept that you are going to lose.

“You always have to enjoy playing the greats of the game because you never know how long it is going to happen for. Whenever I play the likes of John Higgins, Ronnie or Mark Williams I always savour the moment. These guys were idols of mine growing up. I never thought I would meet them let alone play them.”