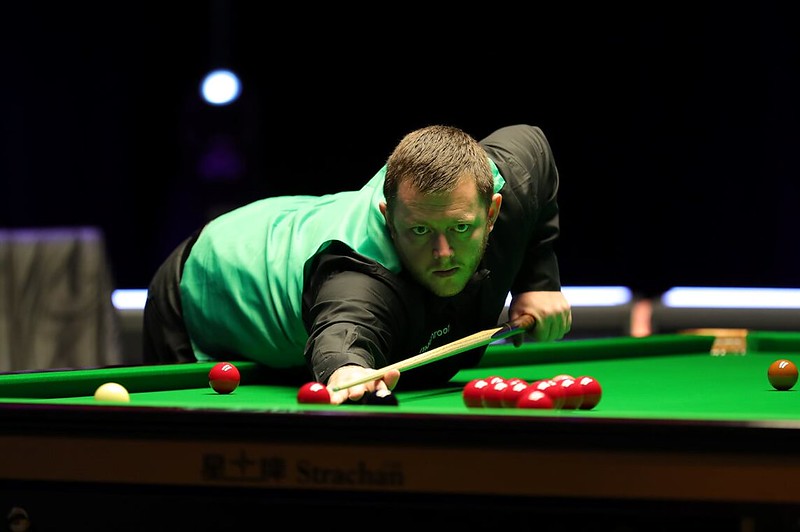 Judd Trump and Mark Allen were the final two players to secure their places in the second stage of BetVictor Championship League Snooker at the Morningside Arena in Leicester.

Trump was made to work hard in his opening 3-1 win over Rod Lawler, with the pick of the frames coming in the first where a break of 64 gave him an early advantage.

The World Number One never really moved out of second gear as he overcame Lee Walker 3-1, with a break of 81 in the last. Two wins from two put Trump top of Group One by two points after Anthony Hamilton had won and drawn his opening two games against Walker and Lawler respectively.

This led to a final match winner takes all with Hamilton to finish the day on table one. Hamilton knew a win was needed, whilst a draw would take Trump through by two points.

Trump took the opener with breaks of 30 and 41, before Hamilton pegged him back to 1-1. It was at this point, the Ace in the Pack found his magic touch with breaks of 92 and 84 to seal three wins from three.

Allen’s journey to the next stage started off in the best possible way, as he dispatched Daniel Womersley 3-0 with breaks of 137, 103, and 94.

The Northern Irishman was made to battle against Mitchell Mann, as he salvaged a draw in the last frame with a clearance of 124. That draw proved to be pivotal to the rest of the day. Mann had also started his day off with a 3-0 rout against Chris Wakelin, meaning by the end of the afternoon session Allen, and Mann were level on points and frame difference.

Allen piled the pressure onto Mann in his last match as he beat Wakelin 3-0 for his second whitewashing of the day. That win took him to a frame difference of +6, meaning Mann would have to win 3-0 in his last game and topple Allen’s high break of 137.

It looked to be going close after Mann took the opening two frames off Womersley with a break of 86 in the second frame. That did leave Mann with pressure to make 137 in the third but he fell away with efforts of 32 and 23. Womersley proceeded to pinch a point from Mann and secure Allen’s route to stage two.

The full schedule for the second stage can be found here.

By Friday, only eight players will remain and only one will be crowned the winner of the BetVictor Championship League Snooker.

BetVictor Championship League Snooker returns with Winners’ Week from 12 noon (UK time) on Monday and is live on FreeSports TV (UK), DAZN, Zhibo.tv (China), and Viaplay, with Table 2 live globally at Matchroom.Live. Full broadcast details can be found at https://championshipleaguesnooker.co.uk/watch/