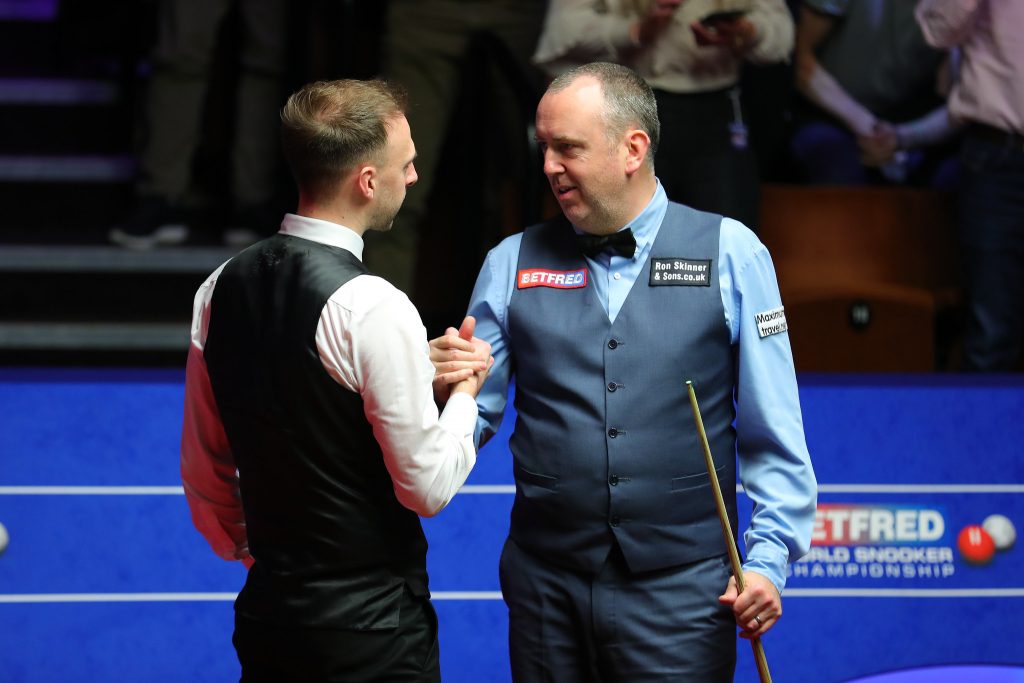 Judd Trump reached the final of the Betfred World Championship for the third time, scoring a 17-16 victory over Mark Williams who narrowly failed to pull of one of the Crucible’s greatest comebacks.

Having trailed 9-2 and 12-5, Williams recovered to lead 16-15 and was on the verge of becoming the first player to win from seven frames behind in a Sheffield semi-final. But Trump regrouped in time to take the last two frames and set up a final against Ronnie O’Sullivan or John Higgins on Sunday and Monday.

A tremendous match joins a list of dramatic recent semi-finals to go to a deciding frame, alongside O’Sullivan’s win over Mark Selby and Kyren Wilson’s defeat of Anthony McGill in 2020, and Higgins’ success against David Gilbert in 2019.

Trump now has the chance to win a second world title, having beaten Higgins in the 2019 final. Victory would make him the seventh player to lift the trophy more than once at the Crucible, joining Steve Davis, Stephen Hendry, Williams, Higgins, O’Sullivan and Selby. If the Bristol cueman takes the £500,000 top prize he will also finish the event as world number one.

Though he has won two tournaments this season – the Cazoo Champion of Champions and Nirvana Turkish Masters – Trump has also had interludes where he has struggled for form and motivation. At the recent Cazoo Tour Championship he even hinted at taking a long break from the sport. While he arrived in Sheffield as the favourite in 2020 and 2021, this time expectations were lower. Trump has gathered momentum gradually over the fortnight, and looked close to his best during the first two sessions of the semi-final.

Welshman Williams misses out on a fifth world final and the chance to add to the crowns he won in 2000, 2003 and 2018. At 47, he would also have been the oldest Crucible finalist since Ray Reardon in 1982 – that privilege will now go to either Higgins or O’Sullivan.

Remarkably, despite failing to reach the final, Williams equalled the long-standing record for most centuries in a single Championship, set by Stephen Hendry in 2002. He made 16 tons in his four matches. 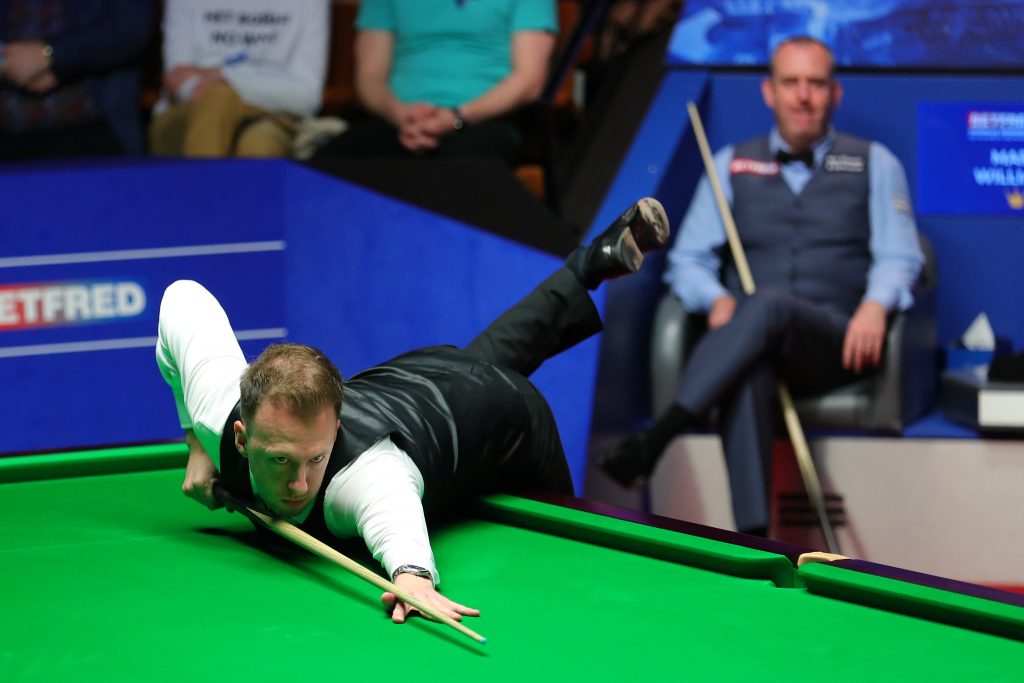 Trump is into his 36th ranking final

Trailing 13-11 going into the last session, Williams had made 42 in the opening frame today when he missed a tough red to a centre pocket, and Trump took advantage with an excellent 64 clearance to extend his lead. Trump had a chance to clear from 49-0 down in the next but was unlucky to snooker himself in trying to get position from black to yellow. Williams executed brilliant pots on yellow and green as he closed the gap.

A run of 59 helped give Williams frame 27, and he took the next with a superb 137 total clearance. Having led since 1-0, Trump was now level at 14-14. In frame 29, Williams trailed 48-27 when he made a safety error with four reds left, and Trump added the points he needed to regain the lead.

World number eight Williams responded with a 138 to equal Hendry’s record of 16 tons. Frame 31 lasted 33 minutes and came down to a safety battle on the blue. Williams snared his opponent in a snooker behind the black, and from the chance that followed he potted blue and pink to lead for the first time. Two early chances in frame 32 yielded only 14 points for Williams. Trump led 30-14 when he slotted in a long red and added enough points for 16-16.

Williams fluked a red early in the decider but then missed a tough blue, and Trump took control with a run of 49. The Englishman led 51-25 when he played a clever cross double on the penultimate red, then potted brown, red and black which proved enough for victory.

“I was so relieved to get over the line, it was tough,” admitted Trump, winner of 23 ranking titles. “Most of the crowd were with Mark because they want to see a fight back and that makes it hard. It’s a daunting atmosphere to play in when the crowd are against you, you are sitting in your chair a lot and it’s difficult to get your form back. I think that’s why we see so many come backs here. 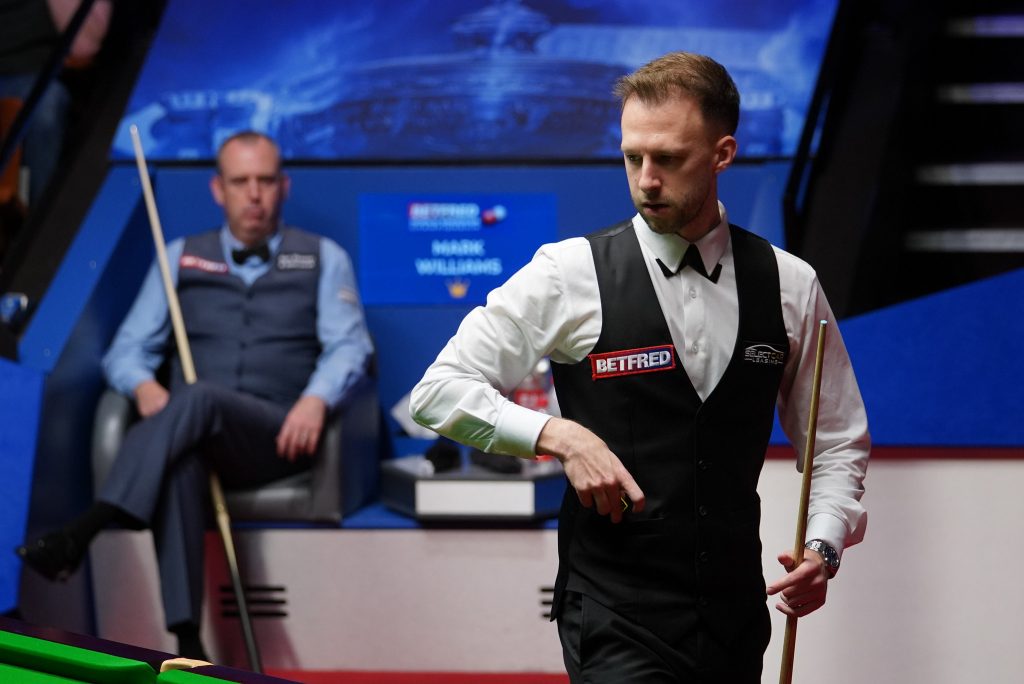 “I’m looking forward to taking the night off and then looking ahead to the final. I’ve had a tough draw all the way through but it’s a dream to play against the best and challenge myself. Whether it’s John or Ronnie in the final, it will be an incredible occasion.

“I said it in every round that it is a free shot and I don’t expect anything of myself. I felt a lot better yesterday, like I did against John in 2019. I feel like I am close to being at my best.

“I was fearing the worst when Mark fluked a red in the last frame. Luckily for me he missed a couple towards the end because he barely missed for two sessions. I was trying to stay positive and still enjoying it, but I just tried to not get too down on myself.”

Williams said: “In the last frame I thought I played two really good safeties and I’m not sure if he went for the cross double – if he did then fair play because I thought I had him in trouble. It was a fantastic occasion, the crowd were unbelievable, I think I must have had at least 80 percent of the crowd on my side. I’d like to thank the crowd for the atmosphere but unfortunately, I came up short in a decider again.

“I had the momentum and put him under a lot of pressure. I was playing really well and making some good breaks, at one stage I don’t think he potted a ball for about 50 minutes. Who does that to Trump? I suppose that’s some consolation. But when it comes to that fighting edge at the end, I just haven’t got it.”