Judd Trump let slip a 3-0 lead against Kyren Wilson in the quarter-finals of the Betway UK Championship, but showed character at the business end of the contest to win 6-4. 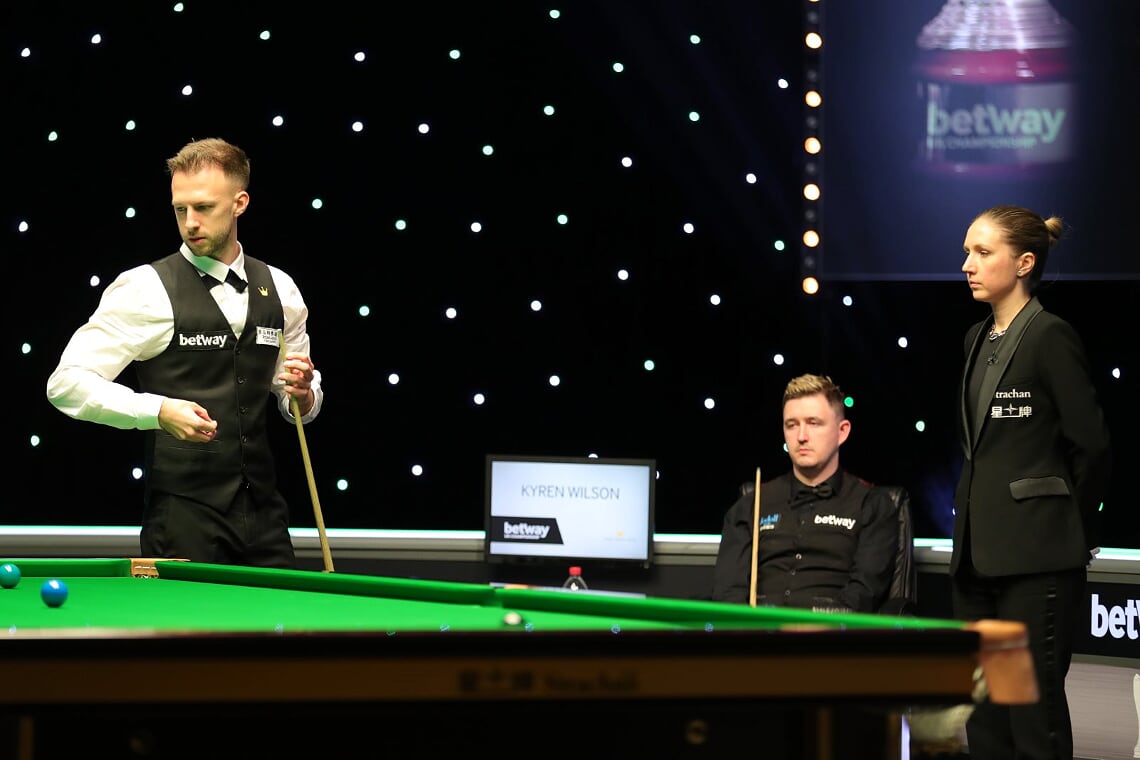 World number one Trump remains on course to win his third title of the season having landed the English Open and Northern Ireland Open within the last seven weeks. The 31-year-old is just two matches away from doubling his tally of UK Championship titles having first lifted the trophy in 2011.

Bristol’s Trump has shown only glimpses of his best form this week but still has the all-round game and confidence to keep his winning streak going.

He made a sensational start tonight with breaks of 73, 102 and 106 to take the first three frames. The match turned in the fourth when Wilson enjoyed a massive fluke on a red when he led 23-17, setting him up for a run of 43 which gave him a foothold. World number four Wilson got the better of a safety exchange on the yellow in frame five and cleared for 3-2, then made a 64 in the next to square the tie.

A scrappy seventh frame went Trump’s way then Wilson hit back with an 88 for 4-4. In the ninth, Wilson was on 24 when he missed a mid-range blue to a baulk corner, letting Trump in for an excellent 71 which restored his lead.

A superb long red at the start of the tenth initiated a break of 63 for Trump, and Wilson’s hopes of a counter-attack ended when he missed the fourth-last red to a top corner.

“It was tough,” said Bristol’s Trump, who has won four out of seven meetings with Wilson this year. “At 4-4 he had a good chance to go 5-4 up, I was delighted when he missed the blue and left me a chance. If I had missed then I probably would have lost the match because my confidence had been knocked. I had to dig in to make that break and I’m sure it would have hurt him. To get through in the end is a nice feeling.

“Whenever I play Kyren I have to play well to win and I raised my game in the first three frames tonight. I was going around the table just trying to pot everything I could see. Then the fourth frame changed everything and after that things didn’t go my way, so it was important to pull myself out of that.

“In the past I have put too much pressure on myself and that’s when you get nervous. This season I have just treated it as a game while trying my best, and I get more enjoyment from that.

“If I get to the final I can start to think about winning the trophy but there’s still a long way to go. Lu Ning is in new territory but he is playing to the same standard as the top boys.”

China’s 26-year-old Lu is having the best week of his career so far and is through to his second ranking event semi-final; the first coming at the 2019 Gibraltar Open. The former world under-21 champion has scored heavily in this event, making seven centuries, but it was his calmness under pressure which helped him to a gritty win over Perry.

The result ends Perry’s hopes of a place in the Masters, but Lu is still in that race and will climb into the top 16 if he wins the tournament.

Lu took the first two frames tonight then Perry won the third with a 76 and had a clear chance in the fourth but missed the penultimate red to a top corner and his opponent punished him to lead 3-1.

Runs of 63 and 69 helped Perry win the next three frames, but he didn’t the chances that came his way in the remainder of the match. Lu won a scrappy eighth for 4-4 then made a cool 39 clearance to steal the ninth. And a break of 58 in frame ten helped the player from Jilin over the line.