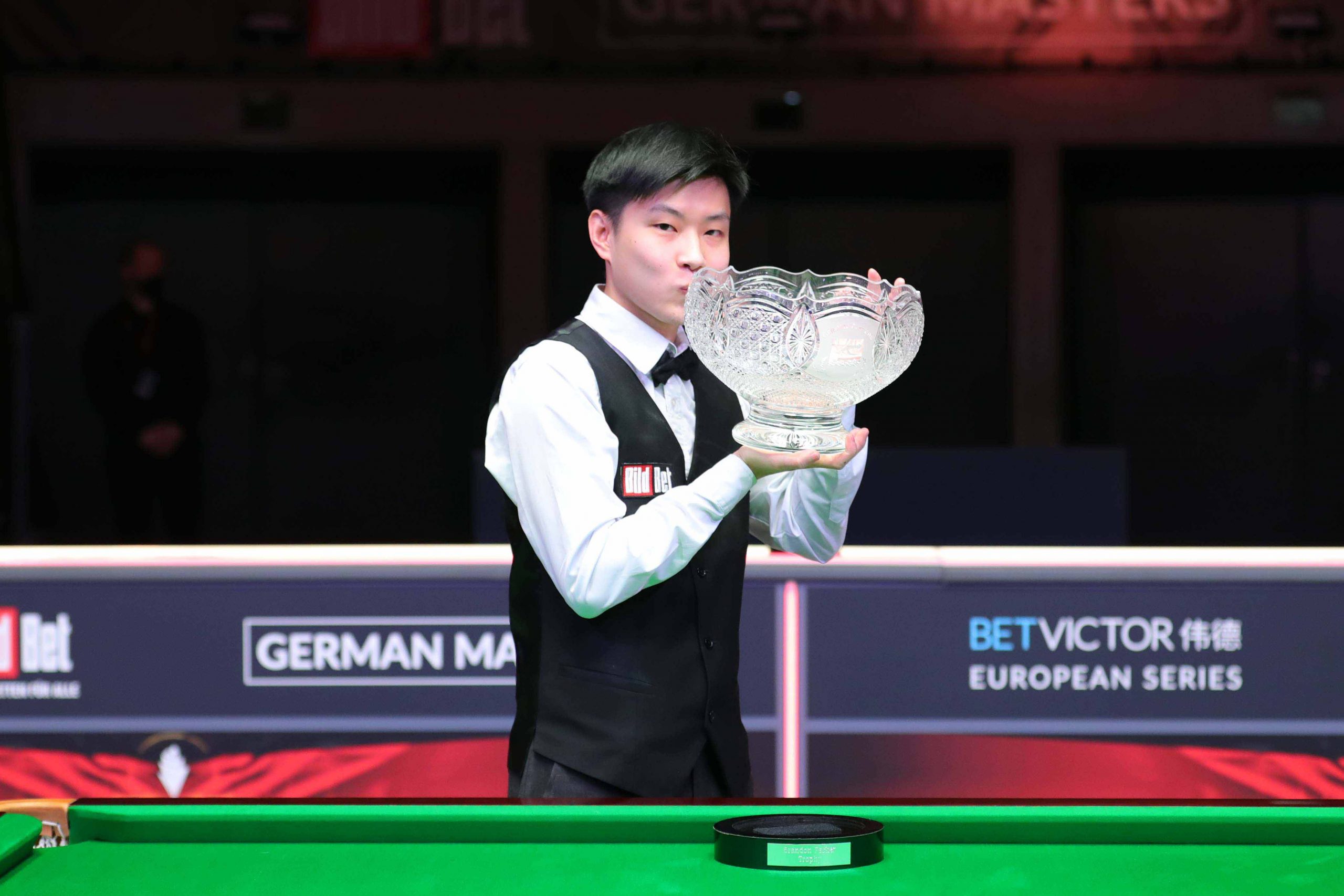 Zhao Xintong won his second ranking title within the space of eight weeks, as he thrashed Yan Bingtao 9-0 in an all-Chinese final at the BildBet German Masters.

The whitewash victory sees Zhao become only the second player in snooker history to score a 9-0 win in a ranking event final. The other came when Neil Robertson defeated Zhou Yuelong by the same scoreline at the 2020 BetVictor European Masters.

Talented 24-year-old Zhao has enjoyed a meteoric rise to the very top of the sport this season. Only four years ago he was relegated from the circuit and forced to come through 2018 Q School to keep his professional career alive.

Earlier in the current campaign Zhao landed a maiden piece of Triple Crown silverware with victory at the UK Championship in York, where he defeated Belgium’s Luca Brecel 10-5 in the final.

Today’s win earns Zhao £80,000, the Brandon Parker Trophy and the second ranking event win of his career. With just three tournaments to go in the BetVictor European Series, Zhao now sits in fourth position. The player who accumulates the most money over the eight qualifying events lands a bumper £150,000 bonus.

Zhao’s considerable talent was clear when he turned professional in 2016, at the age of just 18. He earned his place on the World Snooker Tour by being runner-up to Pankaj Advani at the 2015 World Amateur Championship.

He has grown up playing with today’s 21-year-old opponent Yan, who also turned professional in 2016 at the age of 15. They moved to the United Kingdom to pursue their snooker careers and have both based themselves out of Victoria’s Snooker Academy in Sheffield.

The conclusive nature of today’s result will be tough to take for 2021 Masters champion Yan. However, we can surely expect to see further battles between these two Chinese cueists in the years to come.

This was only the second ranking final between two players from mainland China. The first was Ding Junhui’s defeat of Xiao Guodong in the 2013 Shanghai Masters final. 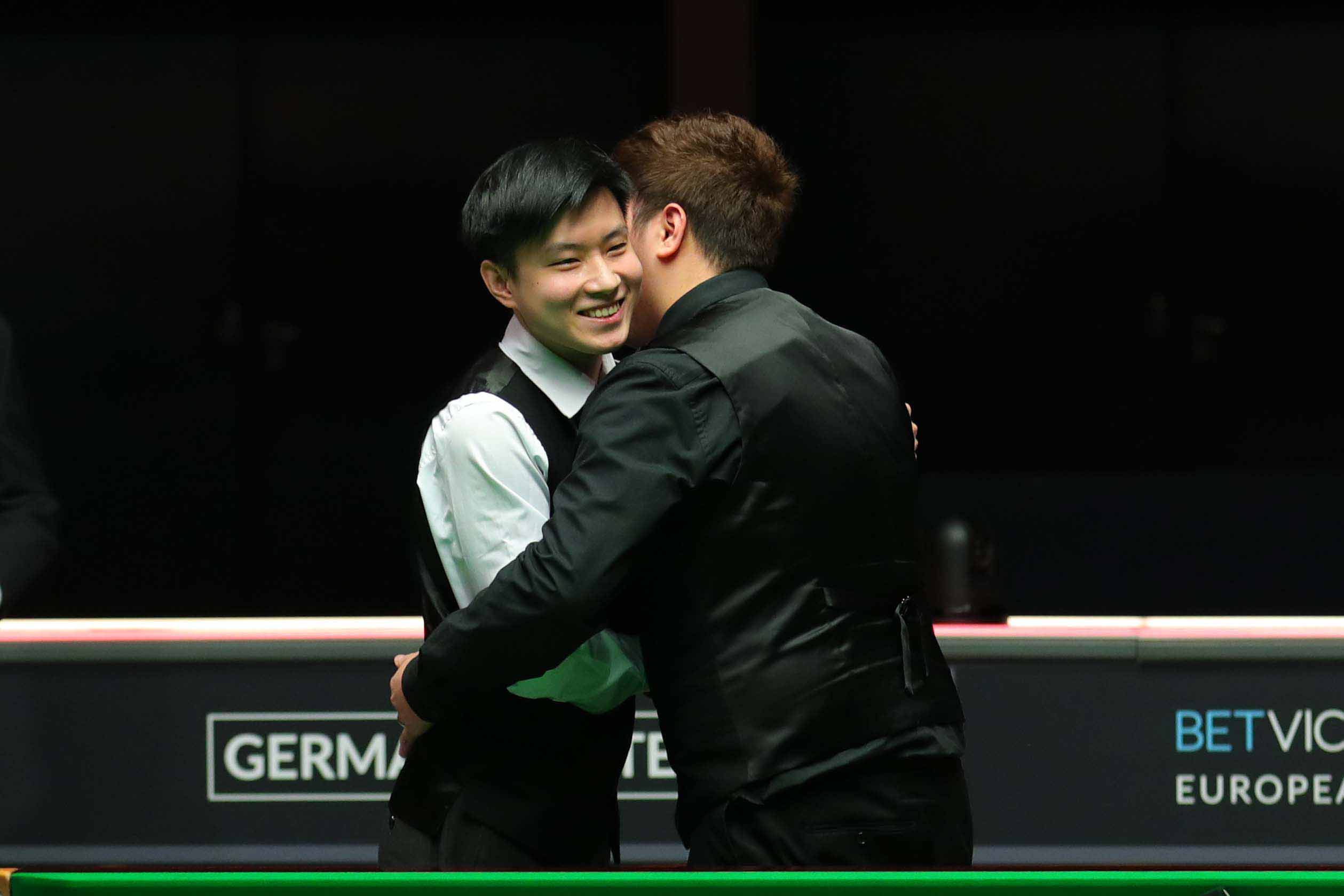 The opening session saw Zhao blitz to the verge of victory with an inspired display, in which he won all eight frames. He wasted no time in completing the rout this evening. The first, and decisive, frame came down to a battle on the final red. Zhao eventually deposited it and cleared to the pink to secure the title.

“It was a surprise for me tonight. I couldn’t believe the scoreline was so one-sided. Bingtao is a good player and we know each other so well. I didn’t believe I could win 9-0, but I did it,” said Zhao, who is now set to move into 8th position in the world rankings. “This is a nice venue and there are nice people here. Berlin is a good city and I really enjoyed it.

“When I was 4-0 up at the mid-session this afternoon, I went out and talked to Bingtao. I could see he was under pressure. I said to him you don’t need to do this, you can play like it is a show. We are very friendly and I wanted it to be a show for the fans.

Yan said: “He played very well today. I was feeling a little bit of pressure and missed so many balls. I enjoyed playing here with a very good friend. Every time I come to Berlin I really enjoy being here and I want to thank everyone who came today. Congratulations to Zhao. He played very well and is a dangerous player. We are like brothers and I wish all the best to him.”