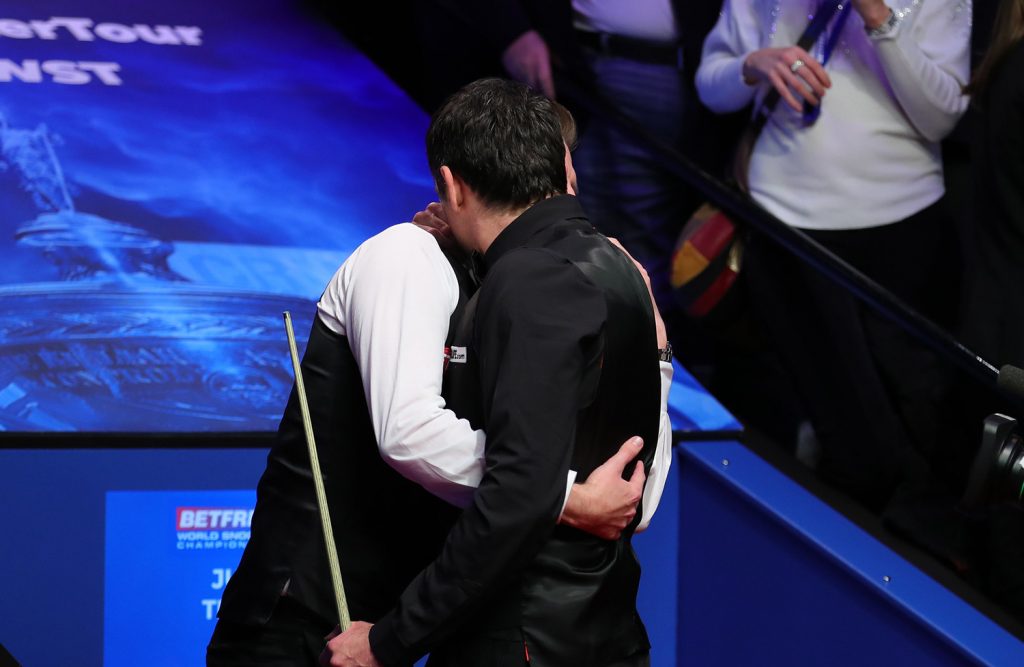 Ronnie O’Sullivan underlined his status as snooker’s greatest ever player by beating Judd Trump 18-13 in the Betfred World Championship final to conquer the Crucible for the seventh time.

Trump fought back boldly from 12-5 down overnight to trail by just three at 14-11, but O’Sullivan pulled away again in the concluding session to win comfortably on a historic night for one of Britain’s finest ever sportsmen. After three decades at the top, his ability to rise to the occasion and showcase his extraordinary skill is undiminished. Overwhelmed, O’Sullivan broke down in tears as he embraced Trump at the end of the match.

By equalling the record of seven titles in Sheffield, set by Stephen Hendry in 1999, O’Sullivan puts to rest any debate on the sport’s all-time number one. The Rocket has now either beaten or matched virtually all of Hendry’s most significant records.

This is his 39th ranking title and 21st Triple Crown success, having also won the Masters and UK Championship on seven occasions. The £500,000 top prize is enough to keep him at the top of the world rankings and equals his biggest pay day. His career earnings from the Crucible alone are now just short of £3.5 million.

At the age of 46, O’Sullivan becomes the oldest ever World Champion, eclipsing Ray Reardon who was 45 in 1978. His break-building throughout this event has been as good as ever – a tally of 15 centuries is a new personal best at the Crucible.

John Higgins, his semi-final opponent, described O’Sullivan as “lethal” and “like a different animal.” Physically fit and – when he is fully committed – as tough as any other player mentally, he is capable of remaining at the top level for many years to come and adding more titles to his legacy. 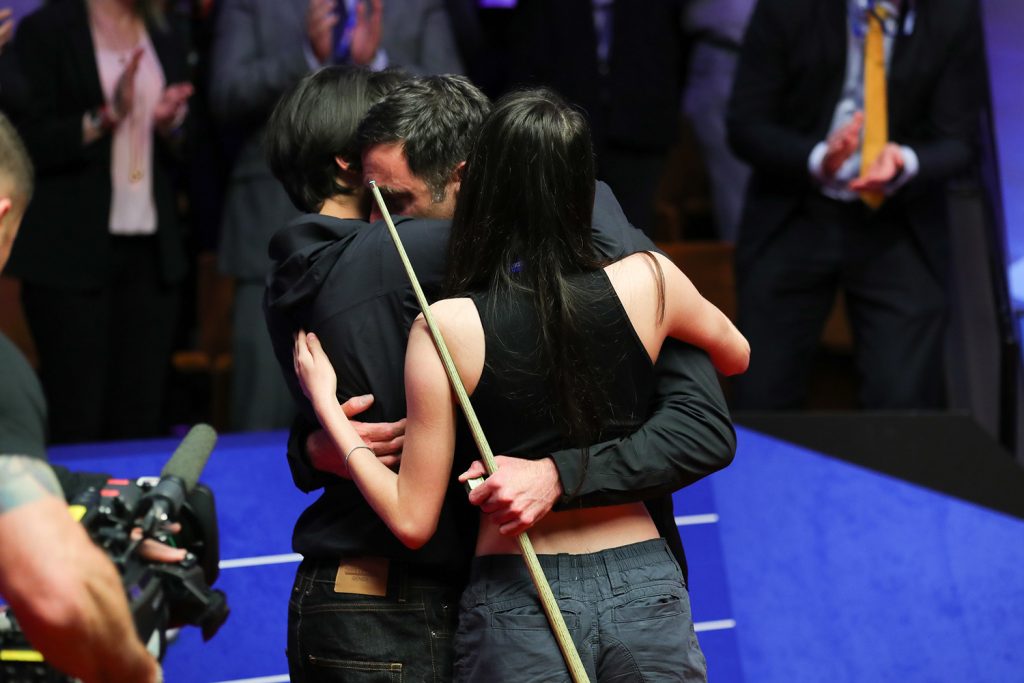 Trump, the 2019 champion, misses out on the chance to become the seventh player to lift the trophy more than once at the Crucible, after Steve Davis, Hendry, Higgins, O’Sullivan, Mark Williams and Mark Selby. The 32-year-old from Bristol fell away in the second session of the final on Sunday evening, when a 5-4 deficit became 12-5 overnight, and had too much ground to recover today. The 23-time ranking event winner earns £200,000 as runner-up and finishes the season as world number two.

Trailing 14-11 going into the final session, Trump needed flawless snooker tonight, but errors in each of the first two frames saw his fight-back fizzle out. He ran out of position on a break of 12 in the first, and missed a tricky black on the same score in the second. O’Sullivan’s breaks of 82 and 88 moved him 16-11 clear.

Trump pulled one back with a run of 64, but an attempted red to a centre pocket early in frame 29 hit the far jaw, and O’Sullivan’s 75 put him five up with six to play at the interval. In frame 30, Trump made a superb 109, which was the 109th century of the tournament, a new record.

Early in the 31st, O’Sullivan rolled a red along the top cushion into the corner pocket, and went on to make 85 to wrap up a high quality final. Over the match, O’Sullivan made three centuries and 13 more breaks over 50.

“That’s probably the best result I’ve ever had,” said O’Sullivan. “It was a titanic battle against a strong competitor who is young and hungry. I had to fight for every point. Even at 12-5 I knew it wasn’t over. As far as I’m concerned, Judd is already an all time great. The way he plays the game, he plays such dynamic snooker. He’s going to be winning this a few times and the other guys better get their act together.

“I gave him a big hug at the end and was sobbing in his arms. He said some lovely words. What he said to me blew me away. He’s a great lad and I didn’t realise what he thought of me until then. He’s great for snooker. I have been emotional for the last few years, I suppose that happens when you get older. 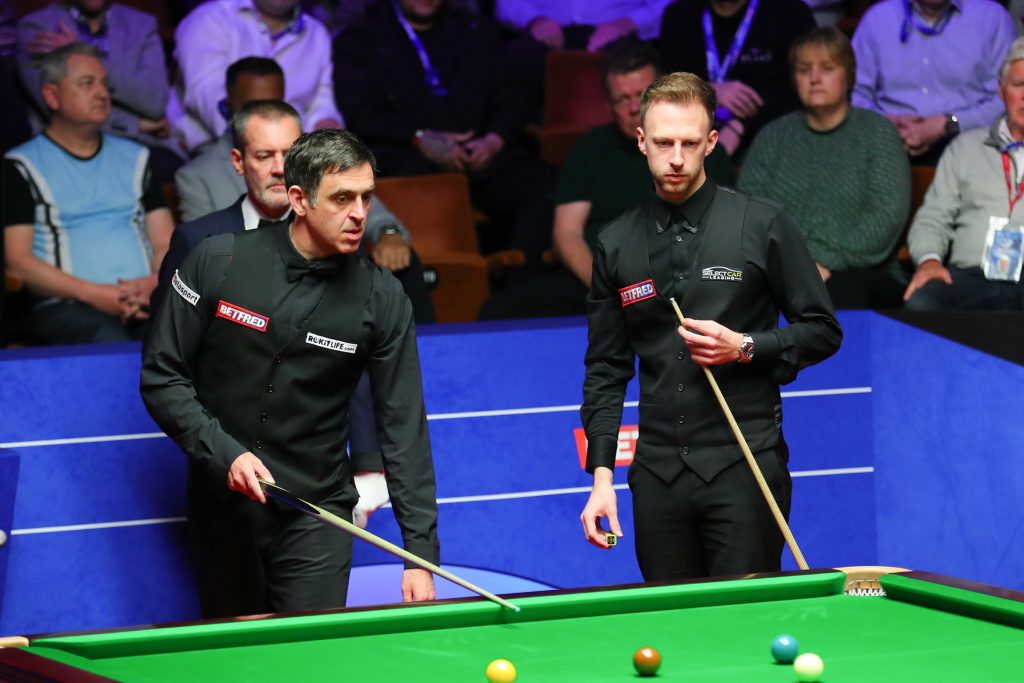 “I’m 46 and playing against guys in their early 20s. They are forcing me to stay fit and healthy and to keep a sensible schedule.

“It was a marvellous moment tonight and great to share it with my family.”

Trump said: “I tried my best to get back into it, but I left it too late. I gave it my all, I was still in it coming into tonight, but I knew it was going to be tough. I had my chances – my long potting was pretty good, I just was not as fluent as I usually am in among the balls.

“It’s an amazing achievement for him and for snooker, it was only really a matter of time before he got to seven. He has dedicated himself to it for the last 30 years, I will not be surprised if he goes out and beats the record now.

“I am proud because I dug in and gave myself a shot at it. It looked like it was going to be a disappointing tournament at the start, I managed to turn it into a positive one. I made a fight of it against the best player of all time and 18-13 is not a bad scoreline.”