Robertson Up And Running 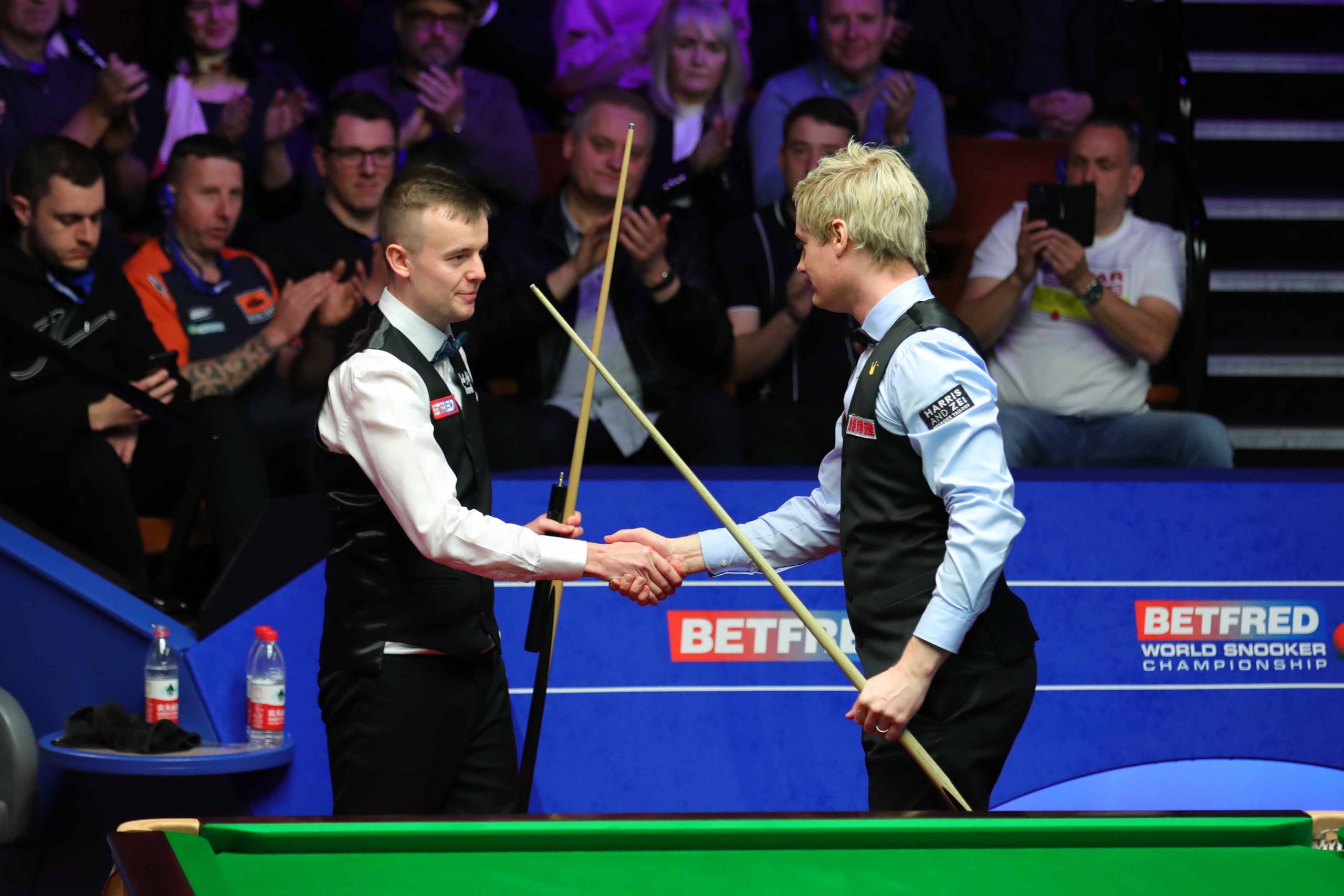 Neil Robertson got his bid for a second Crucible crown underway with a 10-5 win over Ashley Hugill at the Betfred World Championship.

Tournament favourite Robertson has been in red hot form so far this season. The Australian secured a second Masters title in January, beating Barry Hawkins in the final at Alexandra Palace. He’s also landed ranking silverware at the English Open, Players Championship and Tour Championship.

However, Robertson has struggled at the World Championship in recent years. Since beating Graeme Dott in the 2010 title match, he has only reached the semi-finals on one occasion back in 2014.

The 40-year-old has admitted that previous trips to Sheffield have ended with matches where his opponent has dictated the style of the game. Robertson is aiming to impose his own brand of snooker on matches this time around. His next assignment is a last 16 tie with Jack Lisowski or Matthew Stevens.

York’s Hugill can depart in the knowledge he made a good account of himself on his Crucible debut. He came through three qualifying matches at the English Institute of Sport, beating Joe O’Connor in the final round to earn his place on the sport’s biggest stage.

Hugill made a dream start in yesterday’s first session, taking a 3-1 lead. However, a run of five consecutive frames from world number three Robertson put him in charge at 6-3.

When this morning’s concluding session got underway Robertson continued to press home his advantage, taking the first three frames to move to the verge of victory at 9-3.

The Melbourne cueman then looked set to get over the line before an unfortunate pack split left him without a red to go at on 42. Hugill stepped up with a break of 51 and took the frame to reduce his arrears. The 27-year-old then showed his class with a contribution of 82 to make it 9-5. However, Robertson wrapped up the win in the 15th, firing in a superb break of 109 to get over the line.

“I thought my performance was pretty good. Part of you as a seed wants to draw a debutant, because they have less experience here. I stayed aggressive – made three centuries and some other big breaks as well. I played well to get to 6-3 at the end of the first session. This morning just felt like having a professional job to do,” said 23-time ranking event winner Robertson

“He was just walking around the venue smiling to himself, he looked so comfortable, so I just thought is he going to come here and absolutely fly without a care in a world. That’s how he started out. He was deserving of his 3-1 lead. I saw the footage of his family watching his last qualifying match, that was lovely to see. I hope he enjoyed playing here, It was nice to see him playing with a smile on his face.

“I just have to take it one match at a time. The matches are so long you can’t get ahead of yourself and start looking at potential draws or anything like that – you’ve just got to play. I’ve always done that in any tournament no matter what it is. I just play a frame at a time.”

Hugill said: “It was incredible. I was trying not to look into the crowd too much at first, because I thought it might be a bit intimidating. In the second session, when it went to 9-3, I thought I would just take it in a bit and try to take in what I was doing. To make my debut is an incredible achievement and I know I can compete with the best in the world.” 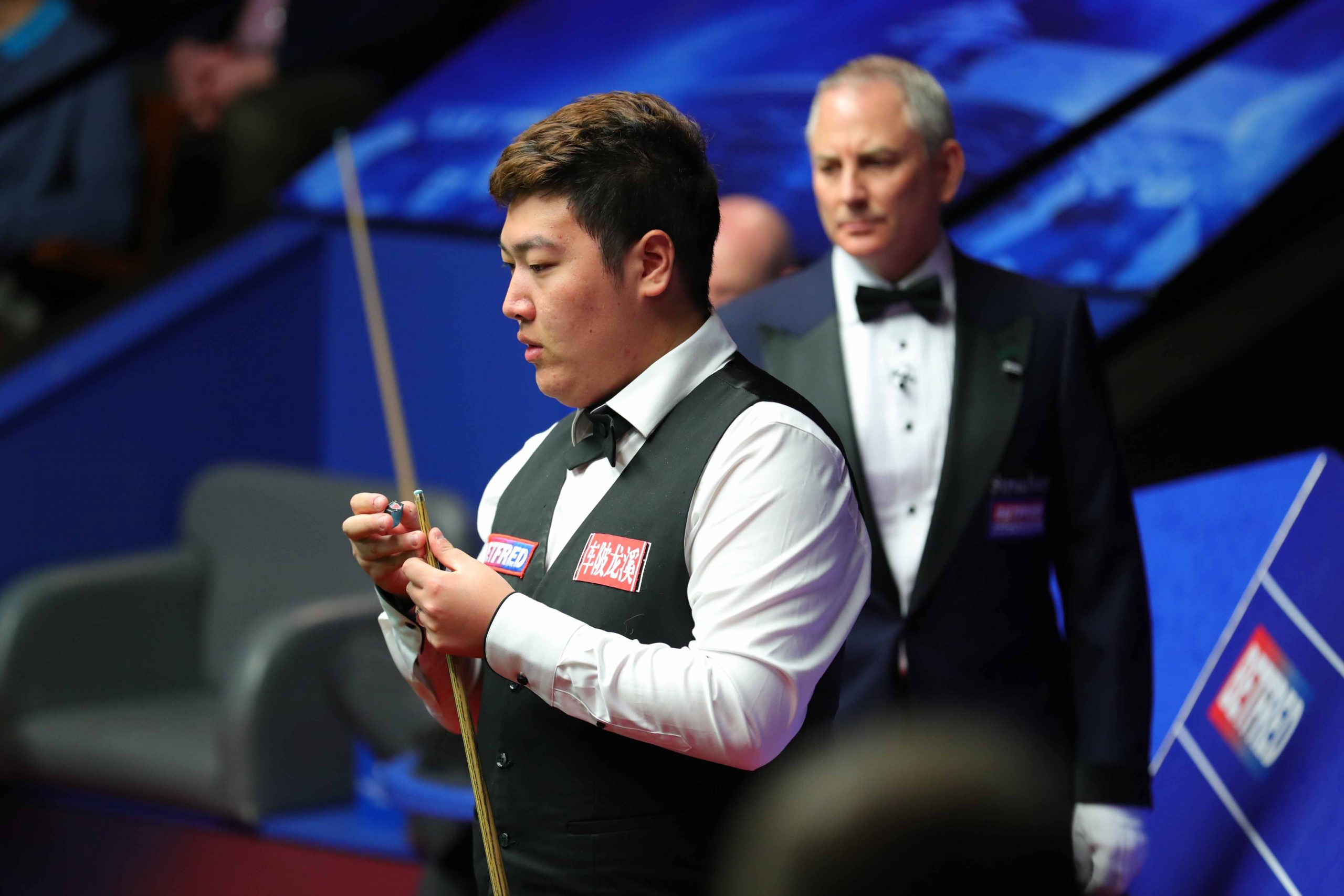 On the other table, 2021 Masters champion Yan Bingtao secured a slender 5-4 lead over Chris Wakelin.

Yan is making his fourth Crucible appearance and has exited the event at the last 16 stage in the previous two years, while Wakelin is still seeking his first match win at the Theatre of Dreams, having lost first round ties in 2018 and 2021.

It was Yan who took the opener in a high quality session, after crafting a run of 71. Wakelin responded emphatically, making a superb break of 130 to restore parity. The Nuneaton potter then stole the third on the black thanks to a clearance of 74. Yan hit back in turn and runs of 79, 69 and 56 gave him a 3-2 lead.

Wakelin claimed two on the bounce to move 4-3 in front, but contributions of 84 and 100 saw Yan wrest back control and end the session with a 5-4 advantage. They will return at 7pm this evening to play to a conclusion.