Only four players remain on course for the 2022 Ways Facilities Management World Seniors Snooker Championship title as the event heads into its final day.

The best of seven semi-finals will take place at the Crucible Theatre on Sunday afternoon from 1300GMT with the best of nine final scheduled to start in the evening at 1900GMT. The final four consists of the defending champion, two former champions and one player aiming to claim the title for the first time.

That player is qualifier Lee Walker who was the first player through to Finals Day after he defeated Ken Doherty, 4-2. 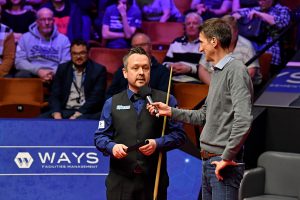 Walker – who won both his opening matches 3–0 – found himself 2-0 down to the 1997 world professional champion. However, with the help of two breaks of 56 and a 52, the Welshman turned things around to move in front before holding his nerve by sinking blue and pink in frame six to complete victory.

Defending champion David Lilley still has the opportunity to become the first maiden winner to successfully retain the title after he dispatched tournament favourite Michael Holt, 4-0.

Lilley took the first frame on the pink before restricting his opponent to just 13 further points as he registered top runs of 50 and 58.

The evening session got off to a flyer as three-time world seniors champion Jimmy White conjured up one of his best performances in recent times to eliminate Rory McLeod, 4-1. 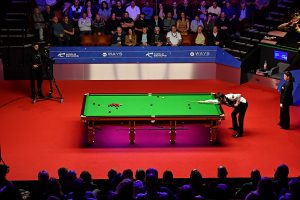 The Whirlwind was in vintage scoring form as he racked up breaks of 53, 138, 71, 74 and 48 to reach the semi-finals of this event for the seventh time. The century in frame two was a total clearance and the new highest break for the tournament.

Since the championship moved here in 2019, White has lost just once in 14 matches.

Lines lifted the world seniors trophy in Scunthorpe in 2017, and he is now two more wins away from raising it again on Sunday night. As yet, no player has held both the UK and World Seniors Championship titles at the same time.

Some tickets are available for both sessions on Sunday. Please visit here for more information and to book.