TICKETS ON SALE FRIDAY 28TH MAY! 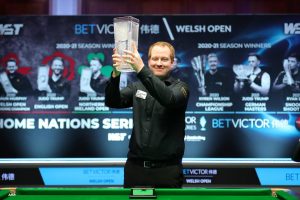 Students, Seniors and NHS workers are entitled to book at the concession rate. ID may be required at the point of entry to the venue.

Snooker’s star players will head to the ICC Wales in Newport in the coming season for the Welsh Open, giving fans the chance to see the sport’s biggest names in action.

Having been staged every year since 1992, the Welsh Open is snooker’s longest running ranking event other than the World Championship and the UK Championship. All of the sport’s greatest names have lifted the trophy, including Ronnie O’Sullivan, John Higgins, Neil Robertson and Shaun Murphy in recent years.

But last season there was a massive shock in the final as world number 81 Jordan Brown beat O’Sullivan 9-8. An incredibly strong field is once again expected in 2022, to battle for the Ray Reardon Trophy.

The Welsh Open is the last of four events in the 2021/22 Home Nations Series and will receive extensive live television coverage on Eurosport.