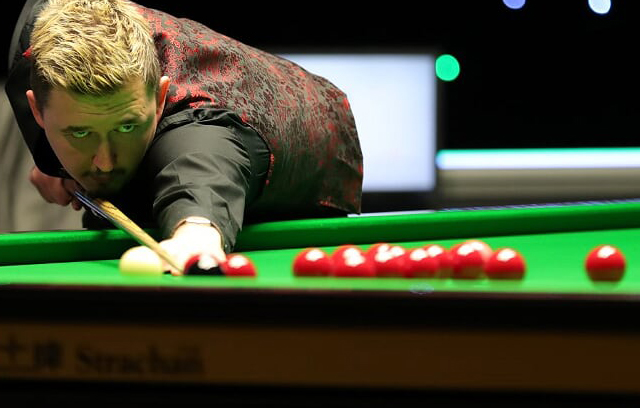 Crucible runner-up Kyren Wilson came through a hard fought battle with Ashley Hugill 6-4 to book his place in the second round of the Betway UK Championship.

The tie included a magic moment for four-time ranking event winner Wilson, who fired in the third maximum break of his career in the sixth frame.

Kettering’s Wilson came into the UK Championship full of confidence, having won the recent Championship League ranking event by beating Judd Trump in the final. By contrast Hugill has been struggling so far this term. The York cueman, who regained his professional status this year by winning the WSF Open, is yet to win a match this season.

Despite the rankings gulf between world number four Wilson and world number 126 Hugill, there was little to choose between the players this afternoon.

Wilson asserted his authority in the early stages, composing a run of 107 to take the opener. Hugill subsequently got his first frame on the board, but it was Wilson who claimed the third and fourth to lead 3-1 at the mid-session.

Hugill pulled within a frame upon the resumption, before Wilson made his sublime 147 contribution to lead 4-2. From that moment of perfection, the Warrior’s standards slipped as Hugill upped his game to make it 4-4 with breaks of 65 and 51.

From there Wilson surged to the finish line, making breaks of 50 and 92 to wrap up the win.

Wilson said: “The 147 break kind of came out of nowhere. I felt in really good form coming here. You never know how it is going to pan out. There were numerous kicks for myself and I just felt a bit edgy. To then create snooker perfection, just shows how topsy turvy this game can be. I’m delighted to do it here, that is my first in a Triple Crown event.

“You know that everyone is watching back home, especially on the TV table. It is something that makes you proud to build up in your career. 147 breaks are hard to come by. There are many great players that have never had one. To have now had three, I am obviously chuffed with that.”

Thai number one Thepchaiya Un-Nooh took a massive step towards Masters qualification with a 6-2 win over Germany’s Lukas Kleckers.

Un-Nooh is currently in 15th position in the race to qualify for the elite 16-player event, with the cut-off coming at the end of the UK Championship.

Former Shoot Out champion Un-Nooh made breaks of 65, 77, 86 and 51 on the way to today’s victory. He faces Duane Jones or Joe O’Connor next.

Un-Nooh said: “This victory means a lot for me. I dream of playing at the Masters at least one time. This is a great opportunity to qualify. I just need to keep concentrating for the next round and keep winning. All of the top 16 are great players. If I qualify, it will be the honour of my professional career.”

Everyone is thinking about the first triple crown event of the season, the @betway UK Championship!

Maguire reached the final last year, but was runner-up to Ding Junhui. Few would bet against another big run from Maguire this year following today’s display. The 2004 UK Champion fired in runs of 96, 113, 128, 80, 65 and 67 to win in just one hour and 27 minutes.

Triple Crown winner Shaun Murphy came through a thrilling clash with Lee Walker, sealing a 6-5 win with the clock just past 12:40am. Murphy had moved a frame from victory, leading 5-3, before Walker mounted a steely fightback.

After pulling within a frame, Walker then edged an epic 50 minute tenth frame to force a decider. Murphy got in after a sublime safety shot in behind the yellow forced an error from his opponent. From there, the Magician compiled a match winning run of 54.

Gary Wilson’s hopes of Masters qualification were left hanging by a thread after a 6-4 defeat to Oliver Lines. If Jack Lisowski beats Farakh Ajaib in his first round tie on Thursday, then Wilson will definitely miss out on a place.